While the San Antonio Spurs have mostly relied on their new-found offensive gear to blow away the opposition en route to a 19-3 start, it seems that old habits still die hard. Proving that it can still shift back into a defensive identity that has often characterized its past championship runs, the Spurs put the clamps on a Portland Trailblazers squad hoping to gain further leverage on its four-game win streak as it dropped by the AT&T. Despite failing to reach 100 points after stringing four consecutive games in triple-digit scoring, the Spurs were still able to win comfortably on the strength of its league-best three-point shooting, and holding down the Blazers to a measly 78-point output on 38% field goal accuracy.

More of the same winning basketball, after the jump.

A colleague at work had me listen to this remake of a timeless song, and I thought it was good.

I still prefer the original though, so if you wanna hear it, here, have some.

Has anybody here read David Halberstam's book, Breaks of the Game? It's a great read on the '79-'80 Blazers team three seasons after Bill Walton led them to the top of the NBA mountain. It chronicles a lot of the ups and downs of a group not just on the court but off it as well, and I particularly remember it for the part on Billy Ray Bates, an unknown name but one of the greatest "shoulda, woulda, coulda" players to ever play in the league.

In a nutshell, Bates, to put it in universal basketball terms, was Jordan before Jordan -- he was an offensive juggernaut that dunked not only with force but with grace, and could score from anywhere on the court. Deadspin takes a sizable excerpt about "The Black Superman" off a book on Philippine basketball, which is a good read if you have the time. I also recommend getting the book -- Pacific Rims -- if you want to know why there are so many Filipinos on a blog that follows a generally media-shunned team like the Spurs (and of course, if you are simply a basketball fan).

Anyway, what a weird way to start a recap, huh? The book just crossed my mind after remembering the opening quote from it, which practically tugged at my silver and black heartstrings:

"Fame," O.J. said, walking along, "is a vapor, popularity is an accident, and money takes wings. The only thing that endures is character."

"Where'd you get that from?" Cowlings asked.

"Heard it one night on TV in Buffalo," O.J. said. "I was watching a late hockey game on Canadian TV and all of a sudden a guy just said it. Brought me right up out of my chair. I never forgot it."

Funny how he got OJ speaking about character, but that's besides the point. If you've listened to some of the post-game audio, Tim Duncan, playing in his 1,000th game, showed us why despite being in a slow state of physical decline, a player's character endures.

Here are the quotables again for your re-reading pleasure:

On coming back into the game during the 4th quarter:

I think [Coach Popovich’s] philosophy this year is to try not to play me in the fourth quarter at all, whether we’re winning or losing. I think he thinks our team is better without me out there. I’ve been trying to disprove him at some point.

I’m very hard to coach and it’s going to get tougher. As the minutes continue to drop and I’m not in the fourth quarter, I’m going to become unbearable on the bench and pretty much annoy him to the point where that he has to put me in. That’s my goal.

If Kobe or LeBron were the ones who said that, the media will probably spin it so much to make them look really evil and selfish, yes, even if they were kidding. There's no such possibility with Tim, who continuously earns the respect of his peers, fans and all sorts of people who follow basketball. Of course, getting an article on ESPN with 99 percent comments that are positive is just icing on the cake.

But from reading these Duncan gems, what immediately popped into my head is that Timmeh is happy, and I mean really, really happy. On the obvious outset, that's what winning does to you, but I thought it's been awhile since he sounded this satisfied in where he's at at this point in his career. He even manages to confirm my thoughts with this response on how he views the way they've been winning so far:

Absolutely. It’s fun to do a little of both. It’s a long season and you’re going to run into games that go different ways. Although we’d love to be a defensive basketball team that holds people to numbers like this, it’s not going to happen all the time. But we can score the ball, move the ball, share the ball, make shots, and put some points on the board, it’s a double whammy, so we’re happy with the way we’re playing.

As I was watching the replay of this one, I thought it wasn't nearly as fun -- both teams' offenses seemed a bit sloppy, and the Spurs defense allowed a lot of open shots at the beginning. Portland's 78-point output also felt more like it was influenced by the fact that they were in a THIGAFONI, which resulted in missed shot after missed shot.

However, credit also goes to the Spurs defense, which game planned beautifully against a tired team by forcing them to take a ton of contested long-range jumpers. Brandon Roy personified Portland's offensive ineptness by shooting a ghastly 4-16 from the field, with 9 of those 12 misses coming from the outside. During the times when he was tasked to defend Roy, Rage was just simply otstanding, shadowing B-Roy on every turn and funneling him to help defenders whenever he thought of slashing the lane. It also helped the Spurs that Roy tweaked his knee (or so he said), and with the meniscus injury still looming large on his psyche, it just made for an awful night.

Seriously, I like Roy and it's rather unfortunate he has to play limited for the rest of his career. Clearly though, he's not the same player as he was earlier on in his career, and just like last year's series with the Suns, his presence might be more of a hindrance than an asset, especially if he'll keep on insisting that his minutes not be monitored or if he doesn't want to try and come off the bench. We'll see.

Andre Miller, meanwhile, seems to be getting old fast. I had to wipe my eyes at times to see if I wasn't seeing Jason Kidd out there getting used and abused by the Spurs' speedy guards. Miller even tried using his body to post up our PGs, but was effective only once, drawing a foul, plus-one on George. Andre's jumper isn't reliable either, and if that isn't falling, he's just limited to mostly facilitating the offense.

Marcus Camby looked old, too, but the stats didn't show it. At 36 years old, he can still use his length to great effect, especially in tapping loose balls for rebounds and blocking shots.

The only bright spots on Portland's offense was the aggressive Wesley Matthews, who shot poorly (7-16 FG%) but I thought played really hard, and LaMarcus Aldridge, who had a good night (16-7) but played rather passively. It boggles the mind why Nate didn't milk LMA's talents to jumpstart the sluggish Blazer offense. Aldridge can just shoot his reliable midrange jumpers over anyone on the Spurs' frontcourt, and yet he only managed to touch the ball with 3 minutes left in the first (he scored on that trip, by the way). If you remember a season ago, LMA just killed us every time -- sort of how David West always gets his against the Spurs. By the time the 4th quarter swung around, LaMarcus tried to get going but was too late to seriously mount a comeback.

On the Spurs side of things, our guards continue to play exceptionally well, with another special shout out to George Hill, who again led the bench in establishing a huuuuge 42-18 points advantage. First possession after he enters the game, Albatross immediately attacks and takes it to the tall Portland frontline and successfully draws a shooting foul. The kid's like Pop's K-9 attack dog out there -- similar to how Pop sics Brucie on opposing offensive stars but this time, George goes Ooey Pooey on both ends. His behind-the-back, near-slam, and-1 play was also a thing of beauty, as if touched by the greatness of Manu. And yes, Bakkie likes this.

Speaking of Manu, only after looking at the boxscore did I notice that Gino took seven threes, and hit only two of them. Waaay too many for my liking, but then again, when he decided to drive the lane, he pretty much was able to do what he wanted -- go in for a layup, or find the open roller or three-point shooter for easy scores. He and Hill owned that third quarter, while Tony and Gary Neal carried the load mostly in the fourth to finish off a not-quite-itself Portland team.

But again (and lastly), going back to Duncan, he played this thousandth game with as little fanfare as possible. He could've gone for a double-double at least (fell short but still an impressive stat line of 8-13-4-2) to celebrate, but that's not the Timmy we know and love, right? After all, at the end of the day, this is just another game and the W is more important to someone who has a solid, firm grasp of the big picture. This is who Tim Duncan is, what Tim's character reveals, and what kind of character the franchise and its fans have taken on as well.

Writings praising an all-time great as he winds down in his twilight years are expected to be posted from here to probably the most obscure of blogs in the internet or smallest of notebooks from Spurs fans in the remotest of areas, but hopefully they will contain stories of not just how he played, but as inspirational figures go, of how he lived. 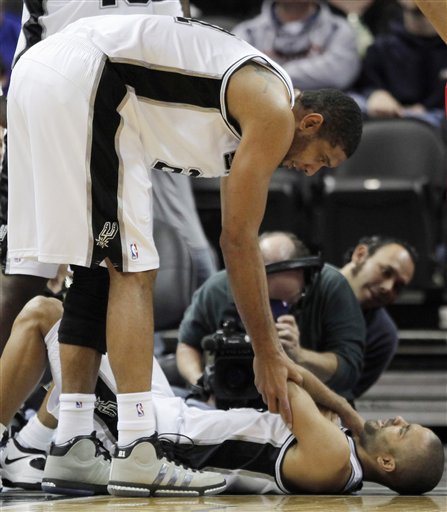 1 -- Tim Duncan: Played in 1,000th career regular season game. 8-13-4, 5 offensive boards and 2 blocks. Battled the length of Marcus Camby and youthful exuberance of LaMarcus Aldridge while keeping the rest of the Blazer guards out of the paint as much as possible. Groundhog Day shortened to perhaps half-a-day, but still brilliant as ever.

Up Next: vs. Milwaukee Bucks. It's time to register a clean 6-0 homestand, but the Bucks pose some problems, especially since this is a Scott Skiles-coached team that relies on its defense. Andrew Bogut has also bounced back nicely after last season's gruesome injury, and they have pretty capable offensive players in John Salmons and Corey Maggette.