Share All sharing options for: Comparing the First 22 Games

I'm going to first admit that I know very little about basketball statistics when compared to other PtR writers. I'm comparing last year's squad to this years. Obviously, we're doing better than last year. Join me after the jump to see how we stack against last years squad, up to the first 22 games.

(Preface: any stats I use are for the first 22 games of last season and this one)

Starting to notice a trend? Our three point percentage has risen as well. Last year, we shot 40.4% from three, and this year we shoot 41%. Not bad.

OK, so you're starting to get the point by now. Let's break it down even further. The next statistic we're going to look at is steal percentage. Steal percentage is the estimate of the percentage of opponent possessions that will end with a steal when that player is on the floor. Everyone except for RJ (who has only dropped 3 tenths of a percentage) has improved. Comparing this and the amounts of points per game given up to opponents, this statistic can be attributed to the Spurs new high-risk offense.

The next percentage we'll look at is offensive rating. This rating is an estimation of points produced per 100 possessions. The numbers speak volumes. Check out the swings of Tony and Manu. It's incredible how effective these guys have become offensively. 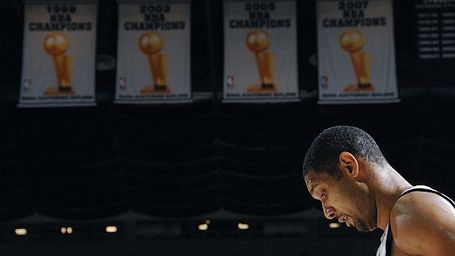