For three quarters, the Spurs just couldn't seem to get things straight on offense. Atlanta's defense looked to take Manu Ginobili out of rhythm and it was a two point game entering the fourth. Then, with Tim Duncan and Ginobili on the bench, San Antonio went on a run with terrific ball movement, timely drives to the paint, and excellent outside shooting to turn the game into a rout.

In lieu of a normal recap, I'm trying something different. After the game last night, I had a chat with ex-PtR head-honcho Wayne Vore. What follows is a (somewhat edited) transcript of that discussion.

JRW: Hey, Wayne. SiMA has been talking about how the Spurs seem to be toying with teams. Seeing how far they can get ahead with their B game -- kind of like the 2005 - 2007 teams seemed to do.

Wayne: He's crazy. I say "pffftttt." I think this is the difference. Last year, we thought they were messing around and they were losing. This year, they are beating good teams by 16. I think this team is just good. They are so good that when they aren't playing well that they are still even with teams. They aren't jacking around though.

JRW: I'm not saying that they're jacking around. It's like this. It's an 82 game season; too many games to play 100% every game. It's a 48 minute game; too long to play 100% every minute. You have to pick your spots to expend maximum effort, and decide when you're going to use your most effective plays.

Wayne: They still execute better than almost every team in the league. It's just hard to do it consistently throughtout the game.

JRW: Right. They still CAN execute better and it IS hard to do it the whole game, so there will be stretches where Tony overhandles the ball and shoots long J's

Wayne: This team is really, really good. They played awful for most of the night. But the defense was pretty solid and consistent the whole time. Our offense gave them some easy points.

JRW: When the 4th quarter came around, and the game was still in the balance, THAT'S when the offense started to click like it has -- the spacing was immaculate, and the PnR was getting WIDE open shots for the shooters, and they were knocking them down. But that WASN'T happening through the first 3 qtrs. Not consistently and I think the idea is not that they weren't playing hard

It's just that there was a looser hand on the reins until the 4th. 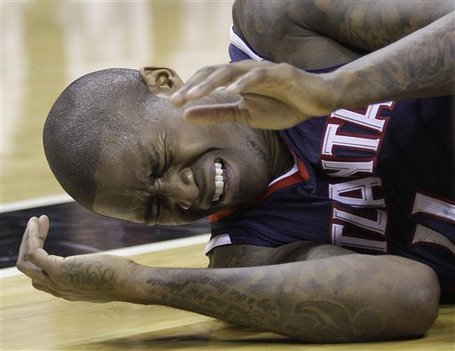 Wayne: I'd disagree. Pop never has a loose hand on the reins.

Wayne: We were just having a hard time playing against a good team. I'm not joking. Pop doesn't jack around like that. Whoever is on the court is expected to execute precisely. Period.

Wayne: On defense and on offense. Seriously.

JRW: So, why did our offense suddenly look like a different team when there was more ball movement?

Wayne: Because we started moving the ball. And, I'll bet they started to get tired. They have a good, long defensive team. We haven't played one like that in a while. And manu kept giving them the ball. If Manu has a pretty decent first half we are up 10.

JRW: That was horrible. Some of those passes were bad, and other times, they just did a good job of anticipating where he was about to go, and I was stunned. Anyway, I don't think that Pop jacks around. I just think that there are things he permits for a while in the context of the game, because you can't yell about absolutely everything all the time at the top of your voice, and keep the attention of the players and that's what I meant by a looser hand,

Wayne: It's like what Coach Budenholzer said to me last year, when I was talking to him about running the pick and roll and whether Blair said good picks. He said, "We try not to over coach it." I think that is about all you need to know about our offense. It's a creative side of the court. You can't over coach it.

JRW: Right, because then you end up with a team full of Temples who are over-thinking and can't play aggressive anymore. What I'm saying is not that they're not TRYING (in the toying sense) but that they're not going to their best material all the time.

Wayne: But, I don't think that changes in the fourth quarter. They just learn and get better throughout the game.

JRW: That's where we disagree, and here's my analogy. I FINALLY have one.

JRW: Imagine a stand-up comedian. He has his set pieces that he uses all the time, and he KNOWS that they'll kill. But he doesn't go straight to those bits all the time. He may open with a joke or two, or he might go straight to needling someone in the front row -- getting a rise out of the audience; working the crowd. But sometimes the timing might just be a tad off, or the audience might start to sympathize, with the guy he's giving a hard time to. The comedian might feel it start to slip away, and he'll go back to his bread and butter sooner and freelance later, or not at all. And that's what I saw tonight. NOT that they were loafing. 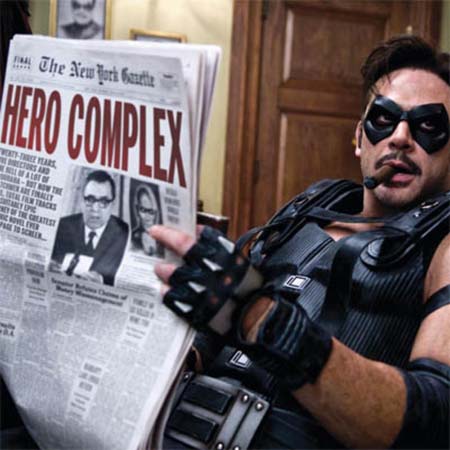 Pop as The Comedian? But who watches The Watchman?

Wayne: I think it is similar. But, I think the game is a bit more dynamic. You have to see what is working.

JRW: I see that fluid part to the game too oh, I was thinking dynamic = fluid

Wayne: It would be like a comedian who had different classes of jokes: raunchy, vulgar, clean, religious, etc. Seeing what the crowd responded to and pulling his strong ones from the different groups to close his show.

JRW: Ok. I'd agree with that to an extent, but I see so many things from our offense that just don't seem to belong in ANY category that Pop would ever choose, and that makes me think that's just down to a "let's see if this works" mindset, instead of a "now we'll try the Tony overhandles play a couple of times in a row."

Wayne: I don't think "Tony overhandles", "Manu turns it over", or "Tim won't pass out of the post" are in the playbook.

JRW: You just made my point for me

Wayne: But, we did all of those things tonight. That's just a case of guys trying to figure out how to attack the defense. We ran a ton of plays that failed.

JRW: What I'm saying is that while they're trying to figure it out, Pop is deciding just how far to let the creativity go before he says "ok, guys, this is what we're doing"

JRW: hah! I know. But that's just because the team is crazy good. And we discuss why it was only a 16 point win.

JRW: well, that just goes to show you they don't know what they're talking about!

JRW: It's a thing of wonder

Wayne: The offense is fine. How do you WANT us to win? Up 40 in the first quarter?

JRW: I'm not saying that ANYTHING needs to be different. I'm not making ANY argument about something changing.

Wayne: Right. If Pop is jacking around, he's doing it less than Phil Jackson.

JRW: I'm not, and never did, say that Pop was jacking around; just that he decides when to pull the levers, and when to let things kinda simmer on their own. Some nights, it'll simmer and then boil and he won't have to touch it at all.

Wayne: I think he does that by the lineups, but not much by the plays. Not on a night like tonight against the Hawks.

JRW: To my eyes tonight, it sure seemed like plays

Wayne: He'll do it up 20 in the second against the Warriors. Sure. He'll want the bench guys to execute the more basic plays. But, he won't expect them to be awesome.

JRW: unlike we do!

Wayne: Tonight's fun facts. Miami and Orlando would be the 6th seed in the West right now. They are 2 and 3 in the east. Chicago and Atlanta would be 7th. They are 4 and 5.

JRW: There's a reason that Horace Greeley said what he did. Or John Soule - whichever of them actually said it. 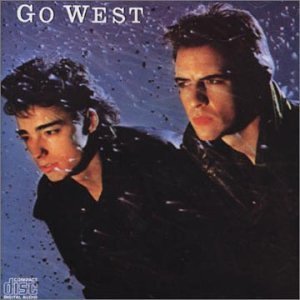 Did somebody say "Go West"?

Wayne: Fun Fact #2: Number of games the Spurs won in single digits. They have won 8 in less than 10 points, but three of those were 9. We had those three close games early (Rockets, Suns, Bobcats.) and two close ones against the Twolves. That only five wins of less than 9 points. That's amazing.

JRW: That's was really good teams do. And I'm so excited that the team is leading in point differential.

JRW: THAT is some perspective

JRW: we're a full game up on Dallas now?

Wayne: Yeah, and that's crazy that we're 19-3 and we have a 1 game lead in our division

JRW: yeah - but they've had starts like this before, we haven't

JRW: do you think that Dallas' defense is for real, or just a fad/regular season thing?

Wayne: Hmm. Well, their defense is only marginally better than ours. I have a hard time believing that Chandler is really that good. But, they did get Butler and Haywood late last season. I'm giving them the cohesion of time credit.

JRW: "The Cohesion of Time" credit?

Wayne: Yeah, time playing together. Like how RJ's 2nd year is reaping benefits.

JRW: and ALL over the court, not just one or two places

Wayne: No. And he's blocking shots and rebounding too.

JRW: 2nd to last preseason game during warm-ups, I watched him and it seemed like he was still not comfortable with this shot. During the game too he was taking what looked to me like bad looking shots. Then, the season begins and he morphs into Annie Oakley. 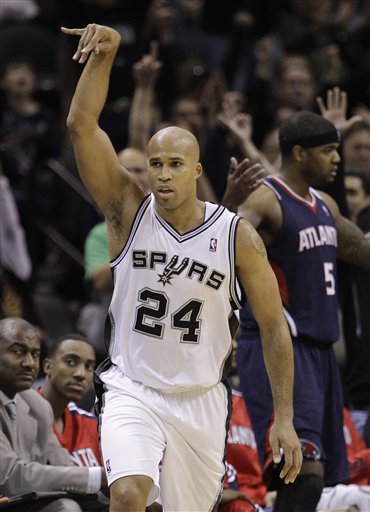 Wayne: Hah. After tonight, we'll be rated the most efficient offense in the league at HoopData

JRW: Well, historically, it was quite rare for the Spurs to win every quarter in a game. Even in blowouts they'd lose a random quarter as well as the fourth. But this season, we've won every quarter of a game, probably about 5 times.

Wayne: Yeah, we are chewing them up and spitting them out. Machine-like.

JRW: There's an image. In the last podcast, I mentioned how well the team was shooting FT's, and everybody was jumping on me for jinxing the team. I said that I don't have that power, and then -- 16-25 tonight.

Wayne: Tough crowd. Good thing you didn't mention that we were 18-3 and winning games. Did you also talk about how well Manu was passing? Ok, let's look at the Spurs schedule for the rest of the month and predict a record.

JRW: Well, there are some on PtR who keep saying, "We've lost one game per month so far. So that works out to 10-0 since they've already dropped one in December." But, looking at the schedule, I think that 8-2 is my best guess.

Wayne: I'm thinking 7-3 or 8-2. If we hit 8-2, or better, we'll be putting up a MASSIVE win total this year. If we continue a good roll for the next month, we are on a serious gravy train. Also, I'm interested to see how we match up with Denver this year. Our first game against them is after 3 days off for them. Which should be good for us.

JRW: But it's DENVER. You can throw all that out b/c the Spurs' address reads: 1200 Nuggets Noggins Lane.

JRW: Well, it depends if you're looking at the physical address, or the mailing address. But either way we're in their heads, and have been for some time. Thanks for taking the time.