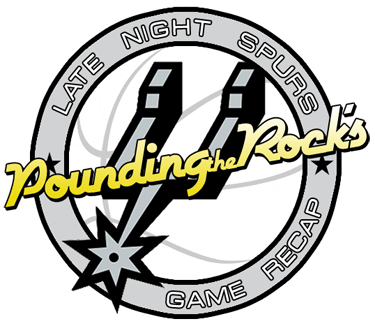 I'm sure many of you still find yourself battling through the leftovers of Thanksgiving dinner. If you are anything like me, you come from a family upbringing where "wasting food" is a grave injustice punishable by death. My Aunt Carolyn once water boarded me and my brother just because we were unable to finish her famous southwest corn stuffing.

My Post-Thanksgiving Stress Disorder aside, I hope your holidays/vacation have been smooth and pain-free. I also hope you are joining me after another victorious evening for the Silver & Black. Did we get another win? Did Golden State earn a 2-game winning streak? Did Monta Ellis have another career game against us? Does Curry still look like a 12 year old?

All I know is that Matt Bonner has had five days of cold turkey sandwiches and, according to scientific study, should (have) go(ne) 20-20 from deep tonight. 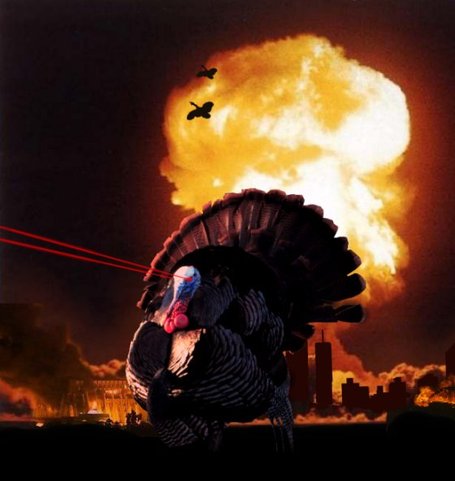 Their day WILL come and you will count yourselves amongst the doomed.

Now add 65 second half points of their own and start wondering if this type of 24 minute production can develop into a 48 minute standard. The Spurs have been a fantastic second half team this season and have had to rely on these second half explosions to save their butts from a couple of major deficits. Compare this season’s team and the 09-10 Spurs when it comes to these dire situations. Think of all the blown leads, random quarter collapses, and struggles to find any type of consistency throughout last season. The 2010-2011 Spurs may have blown a few quarters this season but they are showing that they can win no matter what situation they put themselves in. Based on what we have seen, if the Spurs can develop and maintain consistent four-quarter domination, this squad may just break the 60 win barrier.

The Spurs have beaten the Warriors eight straight times heading into tonight’s game. Even with a dominant history over their west coast opponent; San Antonio will have their hands full with Golden State’s lethal duo of Curry and Ellis. The two guards, a combined 45 PPG average, will have San Antonio’s backcourt on high alert which will leave little help for the Spurs big men to keep David Lee off the offensive glass. Another note of importance: Golden State is 7-2 when David Lee is in the lineup and 1-7 without him. Corralling the former Knick will be a huge priority for Greg Popovich. 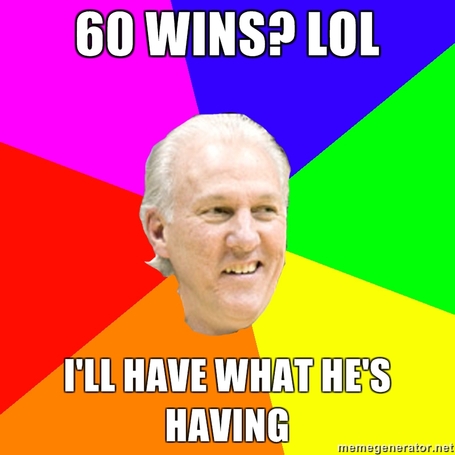 Outside of dumb turnovers (5), the Spurs are clicking on offense; shooting 52.4% overall and getting to the line 9 times (hitting 7). The Spurs are actually scoring more on the break than Golden State but Curry isn't missing much tonight. If San Antonio can prevent the points off turnovers they keep giving the Warriors, this game will be a double-digit difference by half. 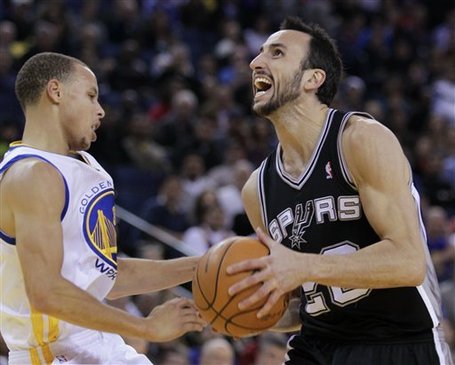 Stephen Curry is knocked back by the Argentinian's God-like Aura

If San Antonio can prevent the points off turnovers they keep giving the Warriors, this game will be a double-digit difference by half.

After committing 5 TO in the first quarter, San Antonio only handed it over once in the second. The shots from outside aren't exactly falling (1-7) but the team's aggression in the paint has created a gluttony of easy points at the line (15-18). Outside of Stephen Curry (16 PTS) , Golden State has been miserable on both ends of the floor. If you take away Curry's 7-11, the Warriors are shooting 39% overall and 16% from deep. San Antonio is forcing Golden State to drive and pop instead of moving the rock and creating opportunities. Ellis (-10) is 4-12 and struggling against the stingy defense of Ginobili (+22). All the Spurs have to do is tighten up the transition defense a little bit and keep their current offensive production. 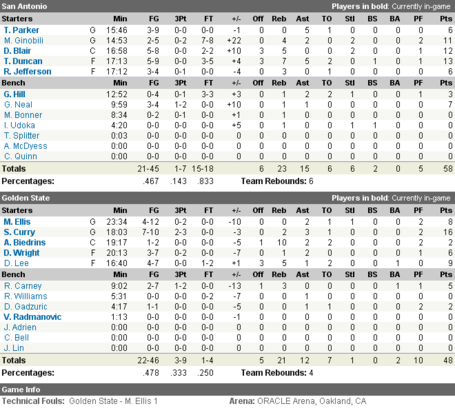 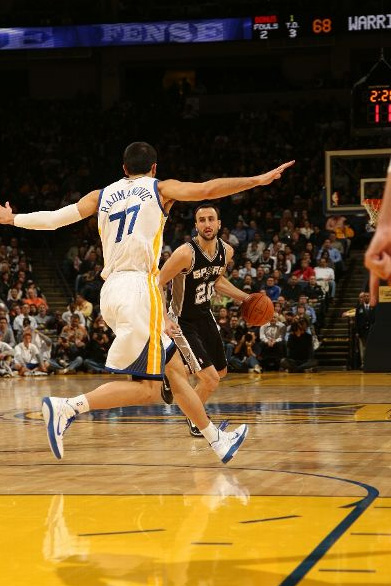 Here we see the Golden Radmonovic expanding his wings, in an attempt to appear larger and to scare off a dangerous predator. He is not successful.

3rd Quarter – Well, SOMEBODY has to eat the candied yams... 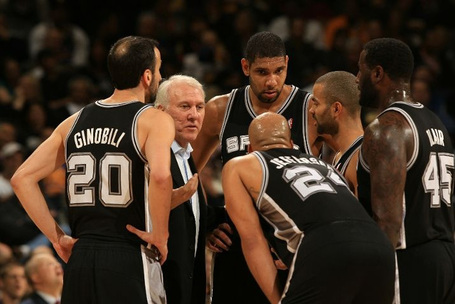 Pop: On this play, Richard, I want you to ride David Lee's head as if it were a petting zoo pony.

The Spurs never relented on the fast breaks and controlled glass throughout the 4th. This was definitely a more consistent game on both sides of the ball and is a positive indicator that this team is still working/improving. Solid play throughout the team (7 players in double digits) and smart/efficient control of the ball. The Spurs were a little careless in the 1st quarter with 5 TO but tightened up their play by only committing 6 throughout the rest of the game. You combine that with the 31 team ASTS (vs 20 from GSW) and its easy to see how San Antonio ran away this one. 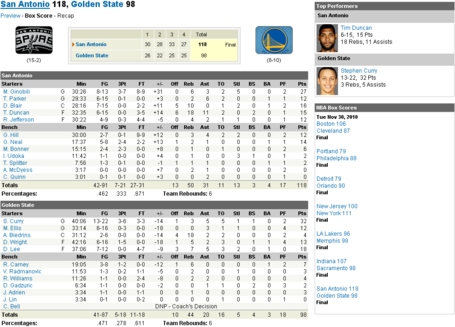 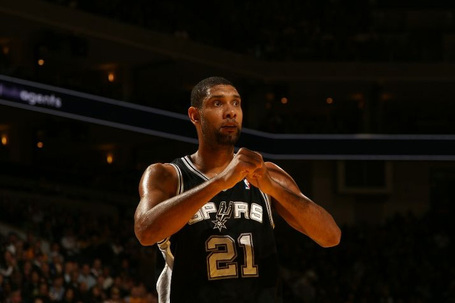 MANU GINOBILI Cares not for your humanity.

Five Quick Shots: What is this "dribble" you speak of?