First big win of the season, yes? I know the Suns aren't as potent as they were when A'm'a'r'e' was still turning Nash's glorious passes into buckets, but as the famous line goes, they still are who we think they are - lots of running and creating havoc on offense, especially those dreaded pick and rolls.

Pardon me if this'll be a little short - we're blessed to have several great posts about this game, starting with Stampler's recap, to be followed by Tim C.'s in-game recap a few hours after this one.

Let me preface this by saying that I finally succumbed to Stern and his evil empire by subscribing to International League Pass, and this was supposed to be the first game I'd watch on the it (thankfully it was on local television so I just viewed the replay). I signed up for ILP yesterday, and in less than an hour, I received a text AND a call from my credit card company reporting a "suspicious transaction" in my credit card account. You should've seen how I quietly panicked, thinking about the lifetime of debts I'd incur because of some identity thief. I asked them what the transaction/s was/were about, and they said, "Uh, someone bought an International League Pass, sir." I told them calmly that it was me and that the transaction was clean.

And people tell me that games are fixed. That's the NBA for you, fellas. Always inviting suspicion. 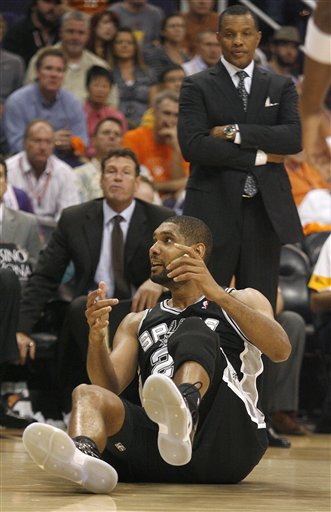 Dan Majerle: "Meh... I used to be able to pull off those sit ups during my playing days."

Perhaps the sloppiest half the team has played so far in this young season - turnovers everywhere, players were making careless passes as if it's still the preseason, bungled easy shots, and committed lots of offensive fouls. The Spurs finished the first quarter with eight turnovers, which pretty much set the tone for the 23 total that the team ended up with.

I thought he'd be a great fit at first but after seeing how plodding Hedo Turkoglu has become from the very opening sequence - he couldn't chase down a loose ball that was only inches away from him and bouncing out of bounds slowly - I already have doubts. He should be in shape since he played summer ball at the World Championships for Turkey, but he only played 17 minutes and looked lost in the Suns' free-flowing run-and-gun offense. Clearly, the experts were right in saying this guy needs the ball in his hands most of the time to be effective, and we all know Steve Nash owns the rock at every Suns possession. And putting Turkeyglue at power forward is probably more disastrous than putting DeJuan Blair at center. I know it's a long season, but good luck with Hidayet, Suns fans.

I'll speak more about Richard Jefferson in a bit, but I just want to mention about his increased number of trips to the free throw line so far. Simply put, if Jefferson drives to the basket, referees more often than not are going to give him the benefit of the doubt with foul calls, compared to, say, a slashing Tony Parker. Yes, I went there. RJ's size at the SF position is such an asset complemented by nice body control and being a veteran in this league, the refs are inclined to blow their whistles in his favor whenever he's challenged in mid-air. Maybe it's just me talking nonsense but during games that his shot's not falling, the team would be best served if he constantly attacks the rim and gets to the line.

The half ends at 50-50 and Nash heads off to the locker room looking pissed. RoLo botched a ton of Nash's passes, and it was clear Stevie was missing the ol' Apostrophe. Warrick and Hedo are what you get for not ponying up to extend Steve Kerr. 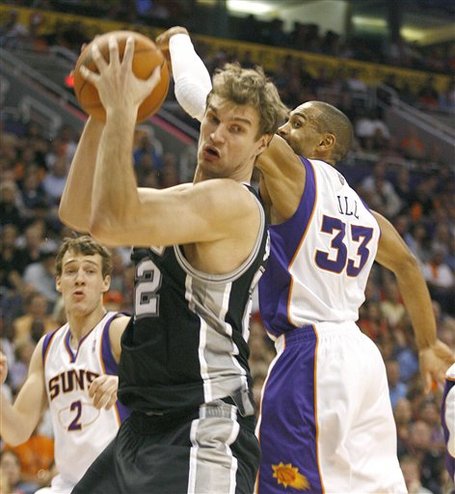 Dragic: "Oh boy, I didn't know Brazilians looked that cool even when rebounding!"

RJ remains active and involved in the offense, which brings a smile to many a PtRockers' faces. During one play, he missed a fastbreak layup but didn't give up on it and followed up his own miss (beating Blair to the LOLbound and putback). All game long, TP and TD kept finding RJ, thanks to his strong, hard cuts to the basket. Rage was also at his element during fastbreaks, and while his finishing abilities are still rusty, he finally seems to have figured out how and when to get his points.

The tale of Phoenix's offense in the second half was practically a lot of Nash, Richardson and Warrick. The Spurs were fortunate that Steve had a horrendous shooting night (8-22), but you could also argue that San Antonio probably won't commit 23 turnovers again (which the Suns converted into 23 easy points). As is usually the case in Suns-Spurs games, you always throw the stats out of the window. The team who wants it more and who has the players with the bigger balls to step up to the challenge always wins.

The Suns coming back to take a three-point lead after Jefferson's three ball party brought a tremendous scare to PtR Land and probably shortened lives. It didn't help that the Big Three, as doggydogworld pointed out in the post-game thread, froze out RJ after those big threes he hit. One was actually a good play when El Contusion found an open Le Baguette for the jumper, but Parker was just off all night because of foul trouble so no money there.

The Big Three and the coaching staff should really look for Rage more not only for long-range shooting purposes, but every time we can't get anything going out of our usual stars, I think RJ has now shown that he can be relied upon. He's worked his ass off in the offseason and it's already paying dividends. If he fails at times then we'll just have to live with it. That being said, trust is such a big factor in the Spurs organization, and Peanut just might have to play this entire season well to really only begin to earn back that trust he hasn't received from a season ago. 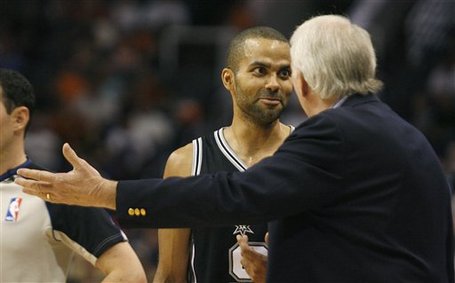 Tony: "Did you just tell me to pull off a wedgie on Nash just to stop him?"
Pop: "I'm desperate because you 'young 'uns' couldn't stop a 36-year old relic, fer cryin' out loud!"

2nd half chits and giggles

3 - Antonio McDyess -- Old man was a warrior out there and proved to be really steady.

2 - Tim Duncan -- Toss up between him and RJ. Timmeh continues to amaze, and had some big blocks during the game, including the last one on Warrick's layup.

1- Richard Jefferson -- Chose him over TD for his clutch shots. Your first 1 star, Rage. And hopefully more to come.

The Magic that Happened 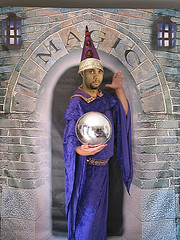 Many thanks to jrw for helping me identify these.

I’m still uncertain about the ampersand, but I do appreciate jrw’s creativity. - CapHill

As an addendum to the &:

Sure is fun to watch Homer Ampersanderson play, eh? - jollyrogerwilco

Wow, I’m speechless….Can we trade Tony so we still have a big three? - spursfan_needs_counseling

Guess who’s going to get a tattoo tomorrow of RJ’S "RJ" on his bicep! That’s right beaches, ME! - SinCitySpur

The 81-1 dream still lives! See you all next game against the Houston Rockets.