Share All sharing options for: Game #17 Preview: Spurs @ Warriors - Back on track

So the Spurs came back from a loss and a half-time deficit to whip the Red-headed Step Child of the Southwest Division on Sunday. I didn't get to see the game as I was spending my day at IKEA trying to pick out furniture. For those of you who don't know of, or haven't been to IKEA let me just say it's like a fat kid going to Willy Wonka's Chocolate Factory. It's a Swedish furniture store that has a lot of cool, fairly priced furniture that is set up in display rooms so you can see just how cool it is. Darn near anything you buy will come with about 134,972 different options or add ons. So needless to say, I was there awhile.

If basketball was like IKEA I could just see Pop telling RC Buford. "RC I need to get a Small Forward with a Black/Brown High Gloss finish (that's a real IKEA color). The Athletic Doors are a must and a Three-Point Drawers would be nice, but I guess that I'll have to sacrifice the BBIQ Holder that I wanted." Buford replies, "How about Richard Jefferson?"

A year later: Pop comes back to Buford, "Ok, I realize that I now need that BBIQ Holder. Can you also add a Good Work Ethic Stand to put it on? I also want to get one of those Rebounding Shelves." Buford thinks and says, "Let me show you the RJ 2.0, he costs 1/3rd the original price." 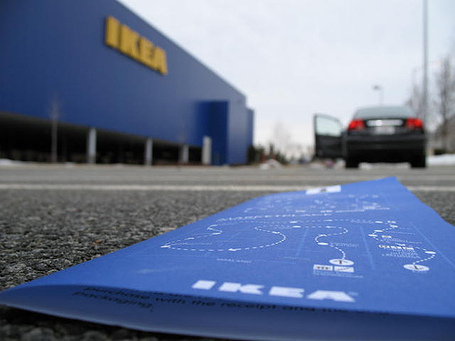 Yes, they give you a map, it's that big.

The Spurs are back to their winning ways. It feels so nice to lull the NOOCH to sleep and then beat the tar out of them in the second half. The Warriors are on the menu tonight and it looks like they've learned to play some defense....well, at least compared to last year's team. They picked up rebounding machine, Lee and now have somebody not named Nelson as their head coach. I'm not going to lie, watching Don Nelson coach was always entertaining to me. I'm sure part of it was that he never was coaching my team, thank God, but he's just one of those guys who's mannerisms are funny to me. I'm sure Golden State isn't missing ol' Don too much.

This is a very winnable game for the Spurs, but it could also be a little bit of a trap game. The Spurs will get back to running down the dream.

PG: Tony Parker hasn't had his best performances in the last two games. That being said, he's still better than Stephen Curry. His defense will need to be on point against Curry who can hit anything that's open and a lot that's not. I'm sure we'll see Hill helping out here. We might see Parker match up more with Ellis

SG: The Sickness is still sick. Manu has been money all season long, I doubt Ellis can keep up with him in anything, but scoring. Manu is the complete player that Warrior fans wish Ellis would be come. I see Manu filling up the stat sheet and having a big game nonetheless.

SF: Dorell Wright, a guy a lot of PtR'ers wanted in the off-season, is simple an amazing shooter. RJ will have his hands full on defense, but should be able to exploit Wright on offense. I'd like to see RJ come out with some fire and take it to Wright early and often.

PF: DeBeast hasn't had his best stretch of games lately either. He only got 7 minutes against the Hornets. This isn't a bad match up for him as Lee is a big hustle guy who isn't real big. I would like to see Blair have a good game and get some confidence back. Lee will be a handful on the offensive glass and Blair, SAM, Splitter and Bonner are going to need to get a body on him.

C: Tim Duncan is, well, Tim Duncan. He got 21 points in 28 minutes against the NOOCH. Beidrins is an athletic guy who is probably quicker than Timmeh, but Duncan has the size and IQ to keep that from being much of an issue. I see the GOATPUFF owning this matchup inside and having another very nice game.

Hill had one of his better games against the Hornets, as did Splitter. I hope to see both of them make an impact in this game. The Warriors bench isn't anything to right home about, but like most of the team they can score.

Pop is working on a little bit of everything right now. I like the fact that he's going with the hot hand and sticking with it. (see: small ball against the NOOCH) Keith Smart is trying to get the Warriors to play a little more defense. Ask Avery Johnson how easy it is to get a Don Nelson team to play defense.

This is the first game of a back to back, the Spurs need to get this game. It could be a trap game, but I don't see the Spurs taking this team too lightly. The Spurs have the ability to overcome slow starts and bad play (see: T-wolves and Hornets). The Warriors don't play any real defense, it's part of their charm.

The Spurs want to get another winning streak going.

Spurs get win #2 on this streak tonight

Key 1 - Defensive rebounding - This is a young athletic team, David Lee is a beast on the boards.

Key 2 - Ball movement - The Spurs need to get the ball movement going to keep the Warriors chasing.