That game on Monday night was fun, wasn't it? Good - it's always nice when your team wins easily. Now, I want you to do something for me: erase it from your mind. We were playing the Clippers - that's all there is to it. The Clips were the worst offensive team in the league coming into that game, and now they aren't. Get the picture?

Now, it's on to Phoenix and the latest chapter in the age old story of sibling rivalry. Big brother constantly beats up on little brother, over and over and over again, and little brother keeps getting more and more frustrated. But eventually, little brother's going to find big brother's weakness, and when he does, he will show no mercy, mainly because of all that built up anger and aggression. Such is the case with these two teams. Little brother kicked our butts last year, no doubt about it.

Demons cast out, monkey off shoulder, finally out from under big brother's shadow, little brother went on to lose to the Lakers(as most all teams are wont to do these last couple of years) in the conference finals. But big brother is still smarting from that sucker punch 6 months almost 6 months ago, and there's a score to settle. Too bad big brother didn't learn anything. 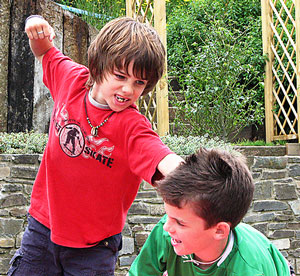 Call me a cynic, but Phoenix was probably the worst possible matchup for our boys in silver and black last season. Our defense is was terrible against [A] midrange jump shooting, and [B] the pick-and-roll. And who should we match up against in the second round? The best offensive team in the league came in with their excellent jumpshooters and devastating pick-and-roll play, and generally vented their anger at losing 4 straight playoff series to us by stomping all over us on their way to LA. You're welcome for the practice games, Phoenix.

Sadly, those two issues above weren't really addressed in the offseason. A certain tall Brazilian should help with the pick-and-rolls once he gets settled in(he was doing a great job the other night in limutes), but the jumpshooters are still absolutely destroying us. (JASON FREAKING SMITH?!? RYAN FREAKING GOMES?!? ARE YOU KIDDING ME?!?)

With that in mind, I don't hold out much hope for tonight, other than the fact that this game doesn't carry nearly as much meaning to our opponent as it would have before last season. My hope for tonight lies in the Spurs' newly acquired firepower. Yes, I'm actually hoping for the Spurs to out-gun the Suns. Foolhardy as it may be, it's still my hope. The defense definitely isn't good enough yet, though it's already improved since the first game of the season.

Enough rambling - let's get on with the preview!

PG: This really isn't anything against the 50-million dollar man, but Tony is not even in Steve Nash's ZIP code as far as leading the team goes. Basically, it's because he doesn't have to, but Nash does.

SG: Manu vs. Richardson? Pffft. Manu is easily the better player. Just don't leave J-Rich open for three, please. We don't need him going all Gary Neal on us.

SF: What a difference a season makes. Renaissance Man RJ has been very impressive so far this year. Hill is a crafty vet, but RJ continues his inspired, aggressive play tonight, he should win this matchup easily, even if the Suns switch Hill and Turkoglu on defense. Childress, on the other hand, he might have trouble with.

PF: I'm pretty worried about this one. This should be the perfect opportunity for Blair to dominate the way he has not so far this season. On the other hand, I shudder at the thought of him "guarding" Turkey Glue. I'm feeling a big night for both of these guys, but the skinny Turk could easily get the better of us.

C: Lopez is a solid young center. Not quite as good as his brother, and not close to Timmy's level, but solid. It'll be interesting to see his career develop, but healthy, early-season Timmy absolutely gets the nod.

Tiago had a pretty decent debut the other night, but let's hope for more than "decent" tonight. Against the Suns' inferior frontcourt, he should have an easier go of it. Then again, we were playing the Clippers in his debut. Yikes. Channing Frye needs to be shadowed at all times, as does Dudley. Those guys freaking destroyed us last year, and they're not getting any worse at what they do.

Gentry's a really good coach. But really, he hasn't reached Pop's "cranky old man that everyone still loves" level yet.

Holy undersized frontcourt, batman! We should be able to dominate inside, but that's what I was hoping for in the playoffs last year. I'll tentatively give us the nod.

The fans are going to get behind this team, and after the shelling Phoenix gave us last year, their confidence has to be super high coming into this game.

I don't feel good about this. Hopeful, but not expecting anything.

48 Minutes of Hell - Our Spurs-blogging buddies are at it again, and they're cranking out the stories pretty quickly this year. Kudos to them for not missing a beat.
Project Spurs - PS has really stepped up to the plate this year. They're still doing the podcasts, but have added some new features as well, like "stat of the game", which I enjoyed reading, and a bunch more writers.

Bright Side of the Sun(SBNation) - These guys hate us, or at least they used to. The staff does a great job, and I'm not just saying that because Seth has SBN superpowers. Go check it out, but play nice - we don't want to repeat any of the trolling that happened prior to that playoff series last year.
Valley of the Suns - 48MoH's Suns equivalent. But, is anything really equal to 48MoH?