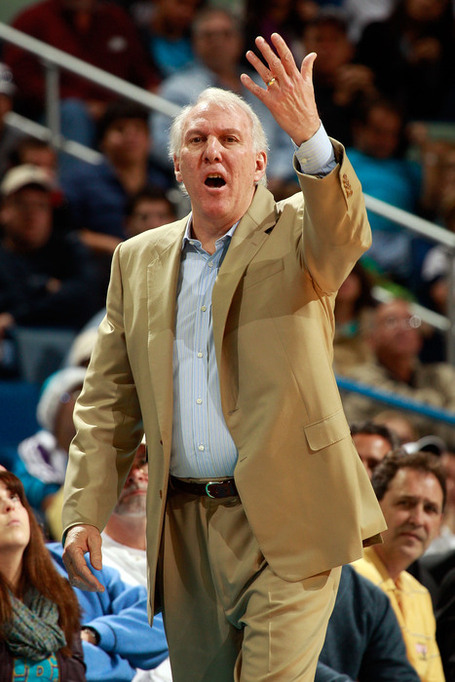 "Rise from the grave, my small ball minions, and make me look good!"

What's the best way to respond when your winning streak ends? Simple, end someone else's winning streak! While the New Orleans Hornets aren't actually in some sort of double-digit win frenzy, they did sport a spotless home record before the San Antonio Spurs came to town and put that big L on the beehive.

Sixteen games in, a majestic 14-2 record, and somehow, I continue to keep my expectations low on this team. After reading about that horrid loss to the Mavs, I was looking at our first two-game losing skid of the season. But man, oh man, this team continues to surprise me - just as how they befuddled the NOOCH with that amazing 30+-point turnaround in the second half. Let's recap this thing, after the jump. 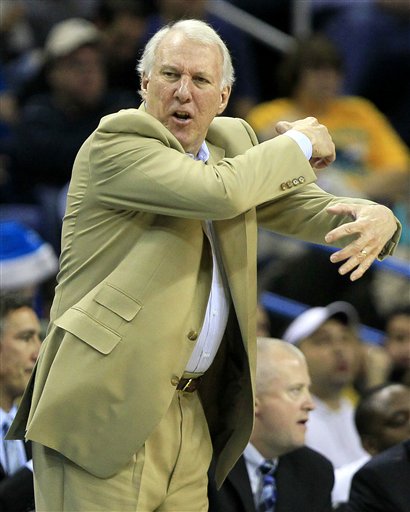 "Monty, why did you leave me? I loved you like a son, dammit! And remember the tight morning hugs I used to give you? Like this? See?"
via cdn3.sbnation.com

Let's face it -- it feels much better to always look forward to good things happening, rather than the opposite. We fragile humans cling on to hope of a brighter future in the dimmest of circumstances, like playoff losses to the Mavs, Suns and Lakers, and a three-year championship drought. So while it sounds sad to hear someone who always keeps his expectations at a low level, such a mindset can actually lead not only to pleasant surprises but longer lives as well (scientifically unproven, of course).

What has surprised me the last few days aside from another improbable Spurs win? For starters, getting my first and-1 basket in an official game for our corporate league. Yes, I'm not particularly an athletic fellow, but I get my minutes by playing with a lot of effort and possibly, a high BBIQ. It's what's been keeping me in games, and the buckets I get are just gravy to the team. So just imagine how I felt when I scored a fastbreak off-balanced shot off the glass and heard that whistle. I didn't even think I was fouled, but heck, there it was, my first-ever three-point play the hard way. Perhaps showing my excitement too much, I missed the bonus free throw. Guess that's one more thing to tick off in the basketball accomplishment list.

What else? Having my three-year old Tony Parker Nikes finally give out but in style, after playing that really hard fought game (that ended in a loss, but still). Usually I expect my shoes to break down while playing some casual, meaningless game or other. Learning that one of my best friends, after all, is pushing through with a huge marriage proposal effort that I'm going to help him with. Just a few months ago, it seemed like he preferred eschewing any creativity at all. Big and little things, but they all add up to my positive bewilderment.

Staring at that 17-point halftime deficit, one can hear that "here we go again" murmur filling the hearts of Spurs fans the world over, only we didn't realize that it'd be the good kind. Again. After one such incidence already in that Minnesota game. As much as Spurs nation has been spoiled by the championships in June, we aren't used to winning at such an early period in the season. For all the sixteen games that have characterized this season so far, it has been a surprisingly good feeling. And if I had my own RAGE score like Stampler's, mine would've been like at positive double digits already. Yep, I am that astonished. 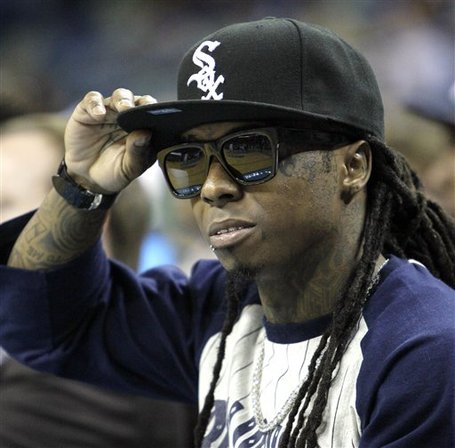 The Half That Shall Not Be Named

If I wasn't on the board to recap this game, I would've blatantly skipped watching this one on the replay, but allow me to relive the cringe-fest, if for only a few paragraphs.

What welcomed everyone at the start of the broadcast was that annoying "Wooooo!" from Ric Flair that the Hornets arena just beats to death. Don't get me wrong, I love Ric Flair and his signature expression, but it has got to seriously stop being used in these NOOCH home games. Why can't they be more creative and think up something more likeable like "Deeeetroiiit Basketball!!!" I mean, that Woo will probably be more tolerable if they used it everytime CPunk3 flops or gets whacked in the 'chops or Duncan tells him to Calm the F Down. Now that's definitely woo-able. WOOOOO!

Anyway, it wasn't the best of starts - we had three turnovers early, with Tim Duncan being involved in each of them, and David West kept on abusing DeJuan Blair in every which way possible. Has West ever had a bad game against the Spurs? I hate how we make him look like Dirk most of the time - dude just faces up and hits a ton of midrange jumpers from everywhere and he always ends up with gaudy stats. I can't wait for Tiago to get up to speed and Brazilian wax West's game off the court.

The defense was sloppy for the full 24 minutes. The team was lazy getting back in transition, bit on every single shot fake, and needlessly kept turning the ball over while missing a few gimmies here and there. It didn't help that the Hornets were making a high percentage of their mid-range shots at every conceivable angle and contortion that it eerily felt like the first meeting between the two division teams.

But there were some bright spots. Timmeh knew that his team would start flat after a loss so he burst out of the gates aggressively, going after offensive rebounds to get extra possessions. He also involved himself a lot in the offense, probably wanting to take his frustrations from that Mavs loss on the shorter Emeka Okafor. It was also interesting to hear the Hornets announcers wanting TD to shoot more instead of being a passer, which just shows how much they respected Duncan's playmaking ability and greatness as a team player. No Kobe Bryants allowed here, mmmkay?

Tiago also seemed to do well, and showed promise on both sides of the pick-and-roll. Defensively, he was quick enough to hedge and recover, while on offense, his improvement on sliding and cutting into the paint produced a couple of trips to the line, where in true Spurs fashion, he bricked 3 out of 4 freebies.

While there's a lot of talk with Tiago still "learning the system/how to play in the NBA", I don't really buy into it. I mean, the man can flat out play and is smart and skilled enough to make an impact every time he's on the floor. Having said that, I won't jump into the Free Tiago bandwagon yet, just because I believe that Pop is hiding him from the rest of the NBA. Yeah, our coach likes to play mind games like that if you haven't been paying attention in the last decade or so. And believe me, it'd be for the team's good come playoff time.

Oh yeah, Chris Quinn sighting. In the first half! Wow. 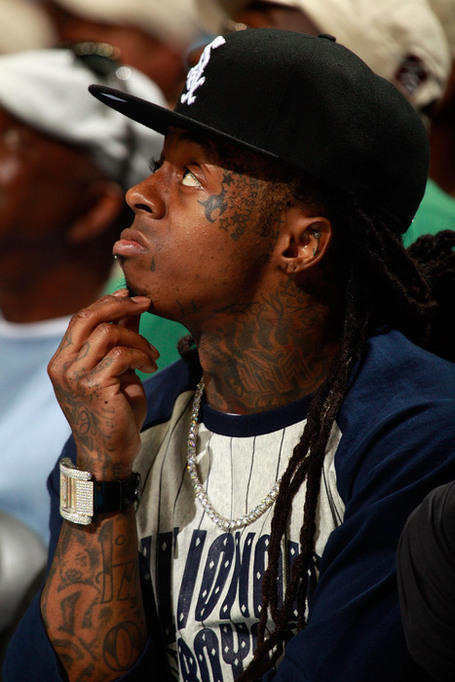 Take A Punch, Rain Down A Hundred Punches Back

Another face of this team shows itself yet again. We've seen a few already this season, particularly the comeback machine and the San Antonio Suns. What we saw from this game looks more like a badass boxer who usually starts off getting beat around like a punching bag. After waking up from his masochistic slumber, the boxer gets up from his stool, tells the opponent, "that all ya got"? and then proceeds to knock the other guy out silly. I think it all started with the Hornets color guy saying "That first half was as much of a thrashing you can give to the number one team in the league." Uhh... say whaaat? I said, don't make him angry. You won't like him when he's angry!

Pop went commando to start the half, throwing out a small ball lineup that just simply threw off CP3 and crew. Of particular importance was how Richard Jefferson played effectively at the four - something that was largely absent a season ago, and one which ex-fearless leader Wayne Vore observed to be one of the reasons why last year's team lost a ton of games. You'd think that Rage's size and athleticism would do good against the quicker power forwards of the league, but apparently last year, he was so uncomfortable you thought it was runaway groom all over again. This time, he was effective in fronting and denying D-West enough that the Hornets forgot about him on offense for long stretches.

George Hill also started to come on in this game, following up a stellar performance against the Little Ponies. His aggressiveness on offense put a lot of pressure on the Hornets guards (I'm looking at you, Belinelli and Thornton), and there were a lot of times, even with Tony on the floor, the coaching staff kept on running the offense through Hill. On defense, you can't discount the work he had on limiting Chris Paul -- limiting Scrappy Doo to 15 points (6-13 FGs) and 7 assists is a laudable accomplishment. Ooey Pooey may never touch his numbers last season for this year, but if he can successfully pick up the slack whenever one of our two super guards are having an off day, I think we'll be alright.

After a 28-16 third quarter to trim the lead to five, all hell finally broke loose, and the boom in "boom goes the dynamite" finally exploded, if you will. It began with the San Antonio Three Party -- Neal, RJ and Manu all unleashed bombs to snatch the lead, and then the Spurs offense went for the jugular.

It's not just the offense that did it, or should I say, it's the defense that jumpstarted the offense. Any time you can hold an opponent to 16- and 18-point quarters consecutively, you have a very big chance of winning games. I thought the Spurs' paint defense was particularly airtight, and instead of letting the Hornets freely shoot long range jumpers they make at a high rate, they found themselves instead shooting a lot of them off-balanced or fading away.

The team defense was particularly superb in the third quarter, when the Spurs held the NOOCH scoreless for long spells, forced six turnovers, and had three consecutive blocks in the last two minutes to close out the last minute of the quarter and set the tone for the knockout punch. Well hello, Defense, my friend! It's always nice to see you show yourself every once in awhile.

Also, Quinn for threeeeee! (to end the scoring) 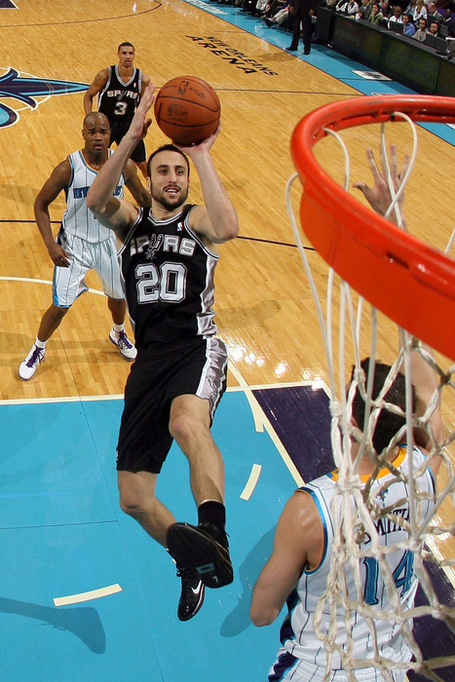 2 - George Hill -- 14 points, 4 assists, 3 rebounds, a steal, a block, and one hell of a defensive effort on one of the league's best PGs. The three-point stroke isn't there yet, but trust in the Albatross.

1 - Manu Ginobili - Dammit Manu, I don't think you've missed out on the three stars yet this season. Just a great all-around effort by The Sickness: 23 points, 3 threes, 8 assists, 7 rebounds, 2 steals and a block.

Up Next: The Warriors are capable of upsetting good teams, but also vulnerable to getting blown out in games as early as the first half. Let's go for the latter, shall we?