Share All sharing options for: Anatomy of a Hot Streak: Part 2 - Player View

Player evaluation is a lot of fun when your team is an unstoppable juggernaut. Despite a near-disaster in Minnesota and a home loss to the Mavericks, the Spurs still look like one of the best teams in the NBA. This is true both in the win column, and when you look deeper into the numbers. 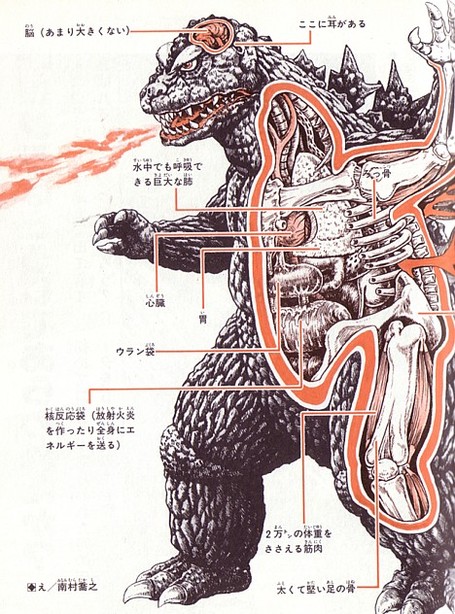 Closer examination reveals the hot streak to be made of ... 100% win?

In the last (chart-heavy) installment I showed how the team is outperforming last year's squad and the rest of the league. The following hodgepodge of colored rectangles and tiny numbers is what you get when you look at the players' performance to date. I've included my thoughts where appropriate; feel free to add yours in the comments.

More than ever our perimeter players are responsible for our offense. 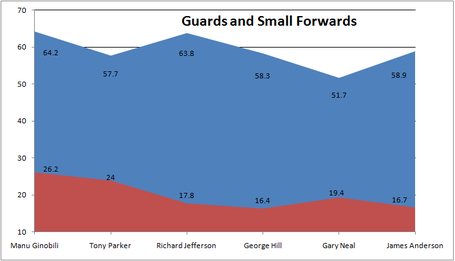 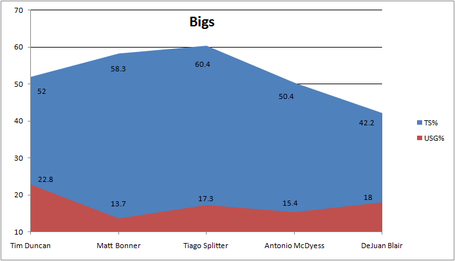 In the graphs above the red area is the percent of the team's offense each player used and the blue area is how efficient they've been. The league average for TS is about 54%. Click to see them side-by-side.

Manu Ginobili is our leader in both the amount of possessions used and scoring efficiency. When you consider the offense he creates for others and what he adds to our defense, it's clear Manu's playing out of his mind right now. [64.2 for Total Shooting Percentage? Yeah, you want that guy's usage at 23.8% -- or higher! -jrw]

Then you've got Parker, who's scoring efficiently at 58% TS and taking 24% of team possessions. As we'll see later, Tony is passing more and shooting less than the past few years. Richard Jefferson is almost as efficient as Manu but is only taking 18% of the offense. Our wings are scoring from very efficient spots - at the three point line and free throw line. Hill and Anderson are both versatile like that, and don't turn the ball over much.

With DeJuan Blair struggling, Tim Duncan getting fewer touches, and Tiago Splitter getting only morsels of minutes, the frontcourt's main responsibility on offense is to set good screens and let the guards create the play. For bigs not named Duncan, it's a matter of being efficient in the pick and roll game or as a shooter. Splitter is our most efficient big when you consider how often he gets to the line and how well he shoots there. Bonner rarely draws FTs but is efficient himself and spaces the floor for others. His usage rate of 13.7 is so low because he doesn't get putback attempts, free throw attempts or commit turnovers. 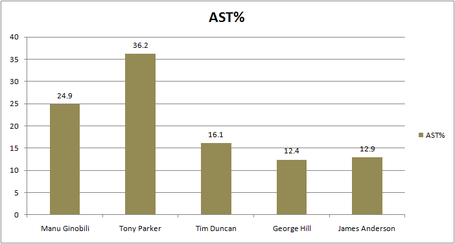 Last year Manu created almost as many assists as our poing guard. This year: Tony is back.

Few 'Centers' in today's game have an important role in the offense. B-R.com considers 27 players who've logged significant time this year to be a C, but only 7 of them use more than their share (20% usg) of the offense. No matter what position you call Tim Duncan, he's a versatile player who sets up teammates and carries a scoring load of his own. This allows him to play alongside a low-usage big who specializes in rebounding (Blair) shooting (Bonner) or defense (Dice). 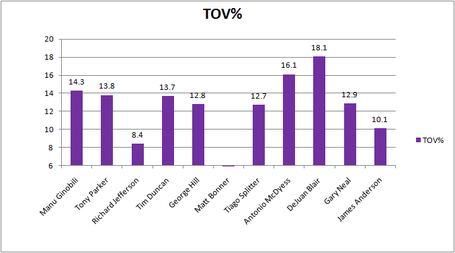 Per possession, Jefferson hasn't had many turnovers. Bonner hasn't had one yet! 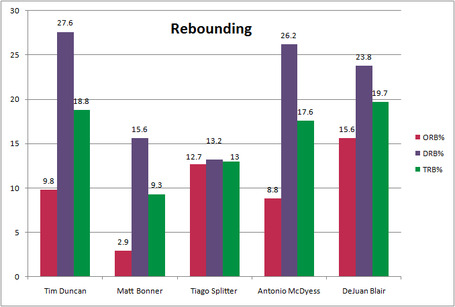 Offensive, defensive and total rebounding rates per one hundred possessions.

Duncan, Blair and McDyess are largely responsible for the Spurs' excellent defensive rebounding. While on the floor Blair and Splitter are better than average at offensive rebounding while Duncan and Dice are near average for NBA bigs. One area Tiago could improve defensively is his rebounding, but this may just be a reflection of a small sample or bad match-ups. 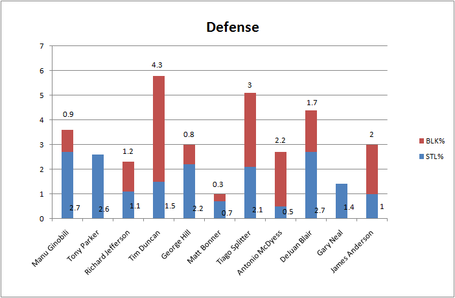 Duncan, Splitter and Blair end a lot of opponent possessions, as do the guards.

So, that's it for anatomy class. I hope you enjoyed the stats breakdown. Let me know what you think I should take on next.