Share All sharing options for: Ime Udoka - Why In the World.....? 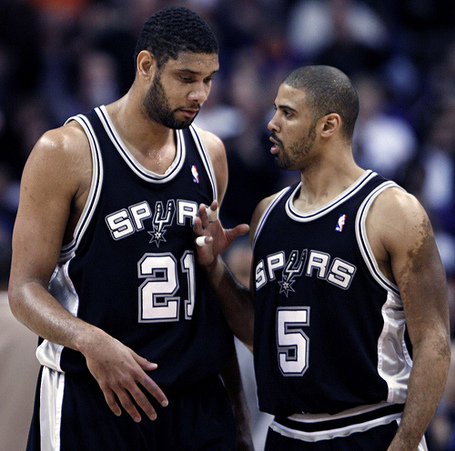 Udoka: I'm sorry, Tim. I'm still getting the order mixed up. Could you go over it one more time?

Duncan: No problem, Ime. First it's lather, then it's rinse, and then repeat. Got it now?

I got to thinking earlier. I was trying to figure out what exactly the Spurs were doing by picking up Ime Udoka, and then it hit me like an empty wine bottle to the head: To win.

Alright, I'm not going to fool you and act as if I was thrilled at the signing of Udoka at first. But as I previously mentioned, I thought about it for a while. Why did the Spurs make this move? Well, for one thing, take notice of how soon after the Spurs announced them waiving Danny Green on the afternoon of the 23rd (around 2:30 PM to be exact), and when they announced the signing of Ime Udoka around Noon of the 24th. It wasn't even 24 hours! So what does this mean? Was Green not good enough for the Spurs?

I don't think Green ever had potential to make the roster. Well, I take that back. He could have made the roster, but he would have had to been the next RJ2.0 or better. No offense to Danny, but he is no RJ2.0. A great shooter, but no RJ2.0. Anyhow, I believe sincerely that Green was nothing but a pawn in Pop/RC's masterful chess game that is the Spurs. I would say that the Spurs signed Green knowing very well that he would only be there to spell time and meet the NBA's roster requirement rule. I believe that the Spurs initially contacted Udoka around the time of signing Green (or even before) and asked him to start getting into shape.

The evidence of that is pretty clear. Udoka was signed to the team officially on a game night on the road, a thousand miles away from San Antonio, and he was in uniform ready to play that same night. Not only that but he got minutes! Tell me that this wasn't another incredible scheme by Pop and RC. But why? Well, Green doesn't know the system. You can pitch a fit all you want and say, "it can't be that hard to figure out what to do" but take a look at the 2nd year RJ, and look at what it did for Cubits. Udoka knows the system, he's a great role player and enforcer. It's almost too simple to figure out the logic on this one.