Greetings, fellow £ers. For all of you USAians, I hope you had a great Thanksgiving, and that you aren't still in a Tryptophan-induced coma. And for those of you who don't celebrate Thanksgiving, I hope you had a good Thursday, and aren't still in an alcohol-induced coma. Unless, of course, it's a mojo-approved alcohol-induced coma - in that case, I'd like to make a toast to you, for taking one for the team.

Because tonight, for the first time this season, the Spurs are facing off against THEM. The evil forces of Dallas are still smarting after that £ing we gave them in the playoffs last season, and are probably out for at least a small measure of revenge. Meanwhile, the Spurs are leading the league with their best start ever, after narrowly escaping Minnesota with a win the other night. But, there's still reason for concern. Here's how things stand in the Southwest Division right now, courtesy of NBA.com:

As you can see, despite their gaudy record, the Spurs are only 1-1 in the games that matter most for tiebreakers: division games. This weekend represents the best chance the Spurs have to not only improve that record, but open up a wide lead over their two closest rivals. On Sunday, the Spurs will be in New Orleans, which will be a very difficult game to win. That means that tonight's game is extremely important to maintaining our lead. Lose two in a row, and we're staring down 2nd place in the division, with a 1-3 division record. No es bueno. But if we can win both games, we'll be far enough ahead to feel very comfortable about our lead.

So, let's start by kicking some pony butt tonight.

Last week, Seth from BSotS referred to the Spurs as the Borg. Well, there's one Spur for whom this seems to ring especially true right now. A Spur who hasn't really shown any emotion since a certain incident which we will not discuss here. Ever since that time, Tony Parker has been dialed in. He's become the ultimate team player, doing everything he can to help the Spurs win. It's almost like he's been assimilated into the higher consciousness of the team, and now the team can't be stopped. 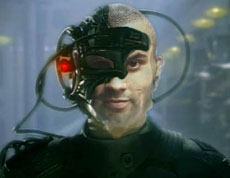 I also decided to do a little prognosticating, based on the season so far. Or maybe I just wanted an excuse to use this song in the preview:


My prediction for the Spurs' record 48 games into the season? I'm glad you asked.

Sorry, no Ruben Studdard today. Let's do this.

PG: A few years ago, there would have been legitimate questions about which of these point men was the better player. These days, not so much. Tony's been playing some incredible basketball thus far in the young season, and Kidd has continued to fade. Over the last 3 years, Kidd has become a deadly 3-point shooter, but even his percentage from beyond the arc has declined this year. Meanwhile, Tony has even started hitting some 3's of his own. If it opens up your drives to the basket, more power to you, Tony.

SG: Stevenson has actually shot the ball well this year, as opposed to his previous two seasons. However, he's still not getting a lot of playing time, with Gollum and the paper airplane eating up most of the SG minutes. Meanwhile, there is only one Manu, and he still plays for the good guys.

SF: Butler has had an off year so far, getting less minutes and points per game than he has outside of his rookie year. Also the worst since his rookie campaign? His field goal percentage. Meanwhile RJ 2.0 is off the charts this year, having (so far) his most efficient season of his career, even though he's not scoring as much as he did in Jersey. I'm giving Butler the benefit of the doubt here, but if this season's early trends hold up, Rage wins this matchup going away.

PF: Can Pop just go ahead and send DeBeast to DeBench? I like Blair, but he is just not cutting it on the defensive end of the floor this year. And now, we plan to start him against one of the best scorers the PF position has ever seen? No thank you. Dirk wins this matchup, regardless of who(besides Timmy) we put on him.

C: Timmy is having his quietest year ever so far, but unlike Butler, he's still very efficient. Chandler, meanwhile, is having a career year, which still doesn't get him close to Timmy's level. GOATPUFF FTW. Also, it would be nice if Tiago could start here, so Timmy could move over to PF for real, rather than being a PFINO(power forward in name only).

Beaubois is [thankfully] not back from injury yet, so we've just Terry and Barea to worry about on the perimeter. Marion is just sort of... there, and Haywood is having a pretty bad season so far after landing that huge new contract from Cuban.

I believe this was settled in late April, thank you very much.

Both our offense and defense have been getting the job better than the Mavs this season. However, the Mavs are the second-best(after us) road team in the league. But, I think "appropriate fear" has been instilled in our guys after the scare in Minnesota, so that we won't blow this game by being overconfident.

Best record in the league. Comeback kings. 12-game win streak. Manu. All of these things are excellent mojo.

I'd have to be a fool to pick against the Spurs at this point.

Rebounding - Dallas is a below-average rebounding team, but they're above average in most other facets of the game. If the Spurs can control the boards and limit their number of possessions, the good guys will be in great position to take this game.

48 Minutes of Hell - By now you know that these guys provide the best basketball analysis on the Spurs-o-net, especially with their new stat guy. They should have an advanced stats-based scouting report up early every gameday.
Project Spurs - PS is still going strong, with nice features like stats of the game and their trademark podcasts. I'm pretty sure they hate the Mavs as much as we do, too.

Mavs Moneyball(SB Nation) - Our SBN siblings for the Mavs, where they apparently enjoy making fun of Sir Charles saying "my mother/grandmother could score [x amount] on the Mavs". Go check it out, but remember to type in the subject line if you leave any comments.
The Two Man Game - Rob Mahoney is a blogging machine, and he does excellent work both at TTMG and at Hardwood Paroxysm. HP is recommended reading all season long, by the way.