From the outside, the Spurs 2011 Season and their hot start has to be seen as a case of history repeating. If you didn't follow Spurs basketball until we became the top team in the league last night, you woke up to highlights of Tony, Tim and Manu Ginobili and probably thought "Deja Vu".

To those of us inside the bubble, however, the team we have is almost unrecognizable. The cast is mostly the same, and on the surface of course we have the essential three each making their trademark impact. Any deeper and it's "a whole new world" (if you're a Disney person) or a "brave new world" for the more morbid fan-base. I can't explain to you why we're suddenly the unstoppable force of the Association, but if you're willing to look at a lot of numbers with me I can at least show you what has changed so dramatically over the off-season.

This is a two-parter; in the second installment I'll look at individual statistics for a different angle on the same topic. Stats are courtesy Basketball Reference.com. Shot Location data is from Hoopdata.com.

The Spurs are ranked second in team offense and seventh in defense. 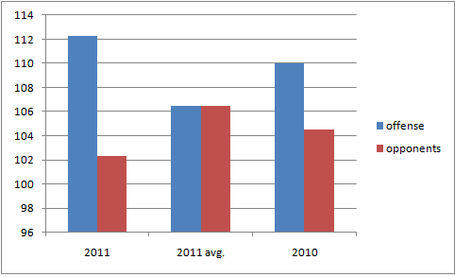 Here we're looking at points per 100 possessions, compared to the league average this year and last year's Spurs team. Compared to 2009, we've improved our offense and defense equally.

The Spurs' strengths are shooting, defensive rebounding, and avoiding fouls. 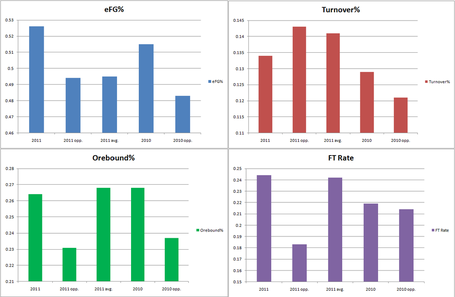 The first column in each graph (click for a closer view) is 2010-to-date, followed by opponent performance, league average, and then 2009 numbers.

The Spurs have an advantage in each of the four factors. eFG% measures shooting efficiency; it's simply FG% if FG% accounted for three-point baskets. We're fourth in shooting offense while holding opponents to the league average.

When it comes to turnovers, the Spurs have been turning the ball over more than in 2009, but we're still ninth-best in this category. Meanwhile we're forcing 14% of opponent plays to end in a turnover, up from 12% last year. 2% may not seem like a lot, but turnovers help our offense as well as our defense. 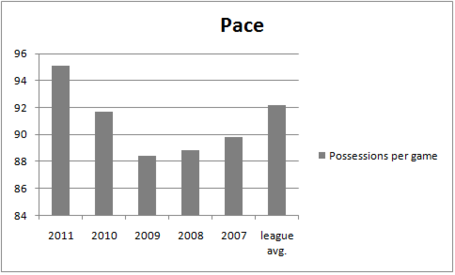 The Spurs have continued to increase team pace, and what was one of the slowest teams in the league two years ago is now one of the fastest. Although most of the change is on the offensive end, where we're replacing half-court offense with fast breaks, our new habit of forcing turnovers might be making our defense possessions move more quickly as well.

Our shot selection has improved for the better, as the Spurs now take a larger proportion of shots from the three point line and at the rim. Meanwhile Spurs opponents are only attempting 15 threes a game (fourth fewest, average is 18) and 20 shots 'at rim' (fifth fewest, average is 22). Although opponents are shooting a good % on threes and long jumpers, long-range shooting numbers vary a lot over the course of the season. Our ability to force opponents into less efficient shots is an asset that should hold up better over the full 82.