Just simply a great NBA game, perhaps the best of the season: there were 29 lead changes and 15 ties. In the fourth quarter alone, the lead changed hands 9 times with 2 ties. Only in the final minutes did the Spurs pull away. Richard Oliver of Fox Sports SW said the media row calls it SUM: Save Us Manu - eight points in the last two minutes, a key defensive play on Nelson, and a final defensive rebound. But this was a team win - no egos here tonight, just a focus on everybody doing his job to get the win. And give some respect to the crowd - on their feet and roaring like a game seven of the finals during those last key minutes. 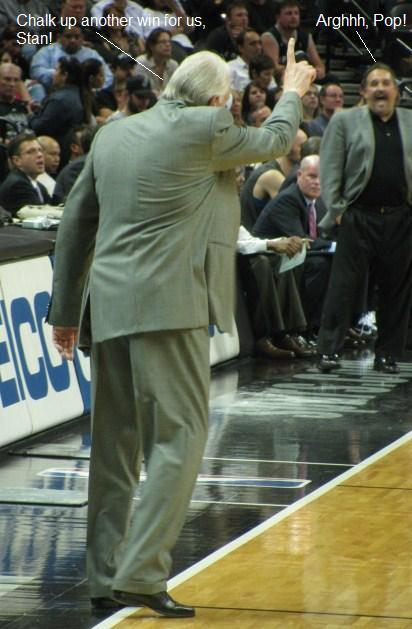 No sneaker pics tonight, but here's a photo that invites a caption. It was taken just prior to the start of the second half, with the Spurs up by one. 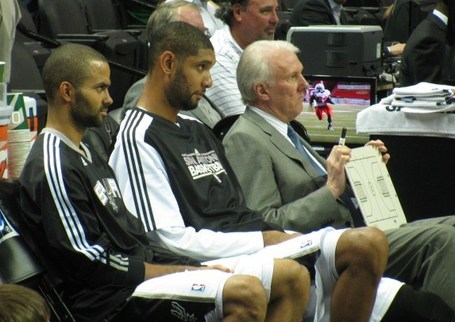 Bonner was a perfect 4 for 4 from the three point line. 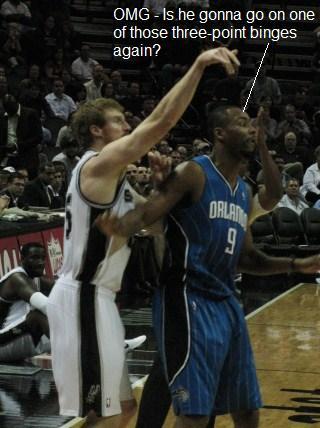 Bonner played more minutes than any Spur, and contributed 7 rebounds along with his 15 points. Six of those came under the defensive basket. Here the contact is fierce at the Magic's end of the court. 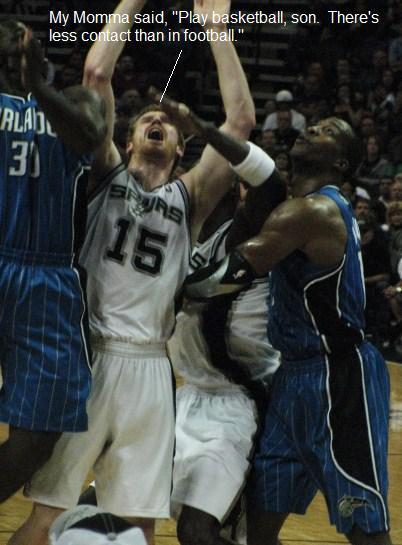 Dwight Howard was credited with two blocked shots, but everyone in the arena thought this shot by Blair was on its way down when he made contact. 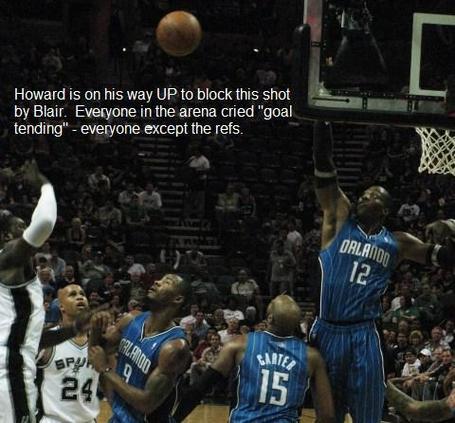 Things evened out in the blocks department as Tim blocked two of Dwight's shots. Howard drew a technical for protesting a non-foul call, and he and Tim continued to discuss the point all the way down the court. 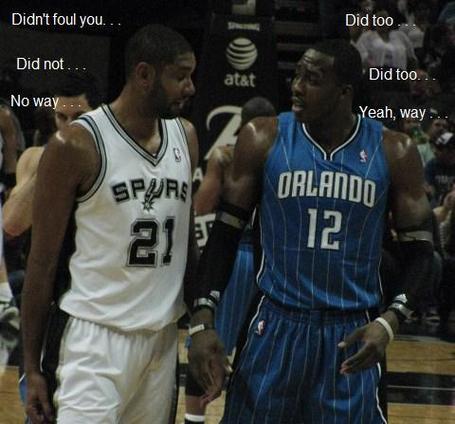 Hill made the technical free throw, and the Spurs inbounded the ball. With Howard still fuming, Tim found an easy path to the basket. 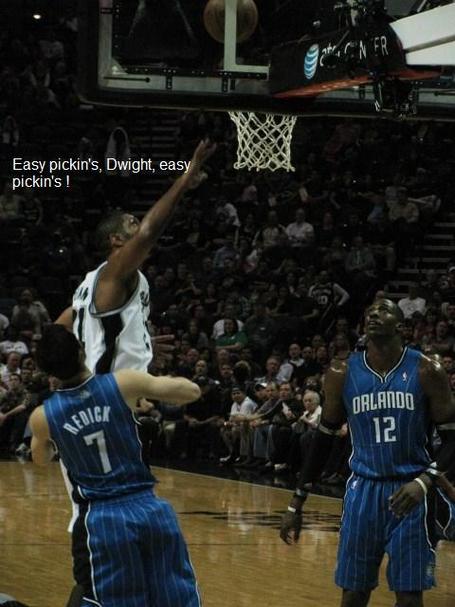 On the WOAI's post game radio show, host Mike Taylor was saying that putting aside the box score, Timmy had won the battle of the big men. Yes, Howard scored 26 and was more athletic, but Tim still had some weapons in his arsenal, too. 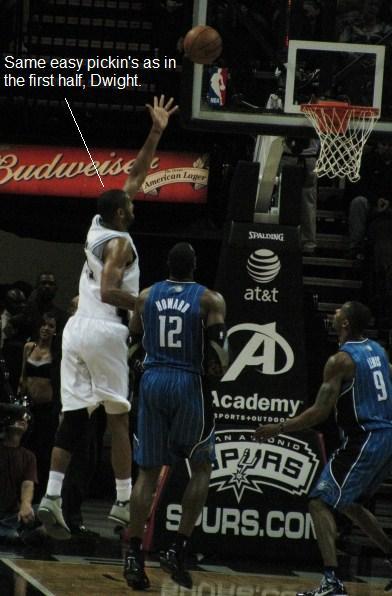 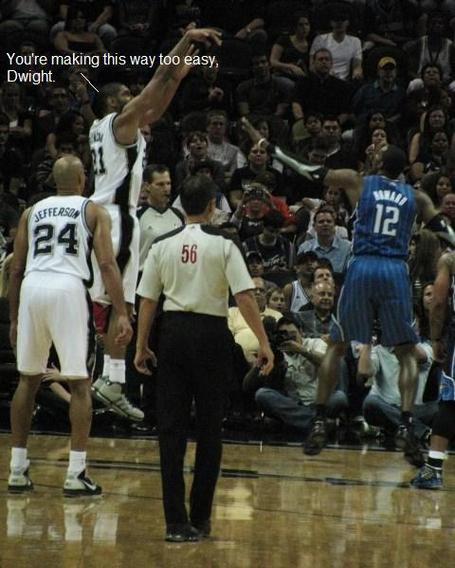 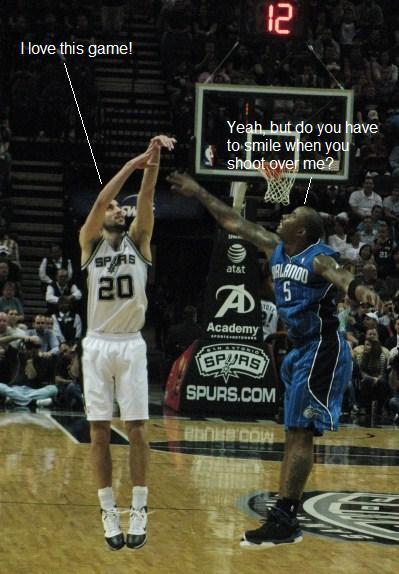 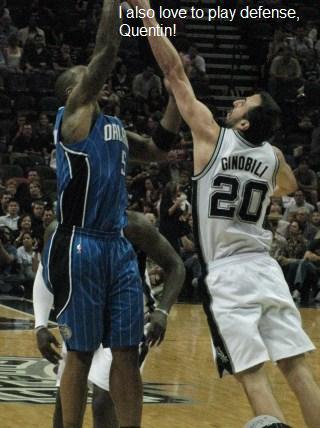 But in the third quarter, Supermanu lost his cape - he scored no points and turned the ball over three times in a row near the end of the quarter. I snapped this picture of him deliberately placing himself alone on the bench during a timeout late in the quarter, doing whatever it is he does in his mind to recover his magic. It must have worked: he opened the Spurs scoring on a layup in the fourth quarter, and then figured in the next two Spurs' baskets with assists to McDyess and Bonner, and in the final two minutes, he scored eight points, forced a turnover by Nelson, and grabbed a key defensive rebound. And Richard Oliver and the media guys had their SUM moment. 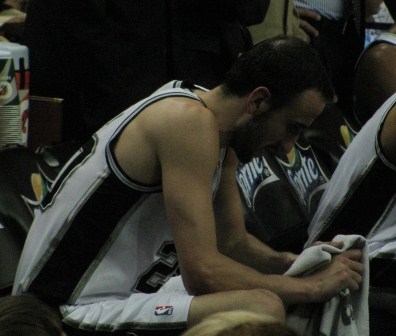 As the game wound down in the final minutes, Manu gathered his teammates on the court , and, in not so gentle tones, encouraged them to tighten up on the defensive end. 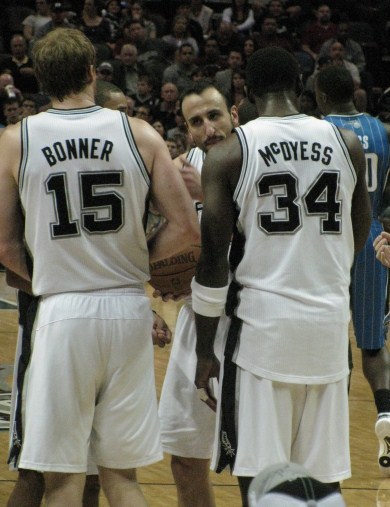 In the final minutes, the ball went to Manu and Tony at the Spurs' end, and Jameer Nelson stayed close to both of them. 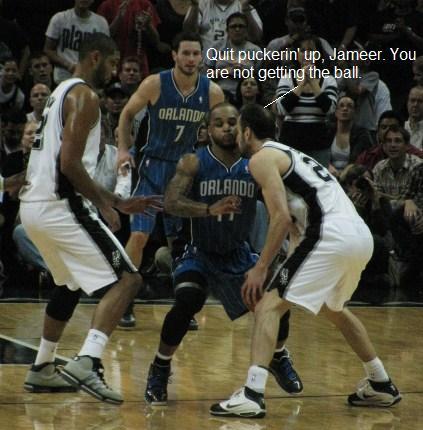 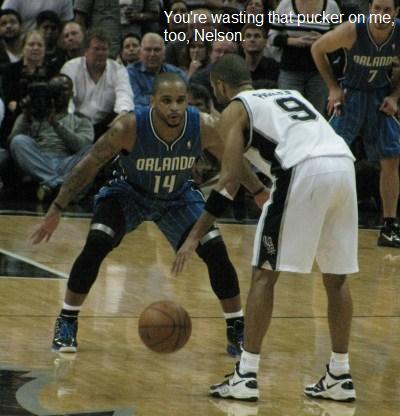 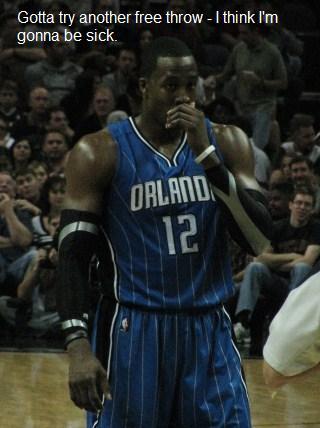 On one shot, Bonner seemed to be mimicking Tony as he hung in the air on a little jumper. He hung long enough for Howard to get into position and block the shot. 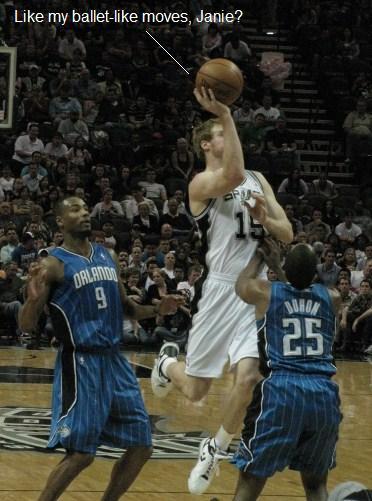 And all eyes are on the ball here, with the Magic seemingly intent on doing some sort of ritual to jinx it or kill it. 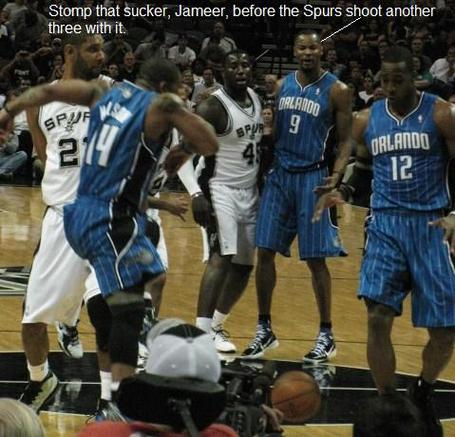