Share All sharing options for: Game #12 Recap: Spurs race past Cavs, 116-92 - The Temerity of Number Ten 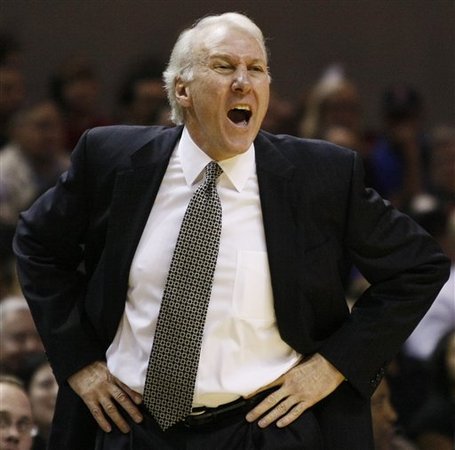 One of the most satisfying things about being a sports fan is seeing your team consistently rack up wins, and nothing lifts that feeling even more than crazy long winning streaks. I thought I'd never see this day, but here we are. Standing on top of the standings (pardon my redundancy, but don't you just want to say it over and over again?), feelin' like it's early Thanksgiving, Christmas, New Year and every San Antonio Spurs fans' birthday all rolled into one neat present.

Seriously, I never expected this moment would come so practically, I'm running out of stuff to describe how this team, while incredibly different from past Spurs champion teams, make me all warm and fuzzy inside whenever I watch them. Let me try to count the ways, and of course the recap, if you can jump high enough to make it. 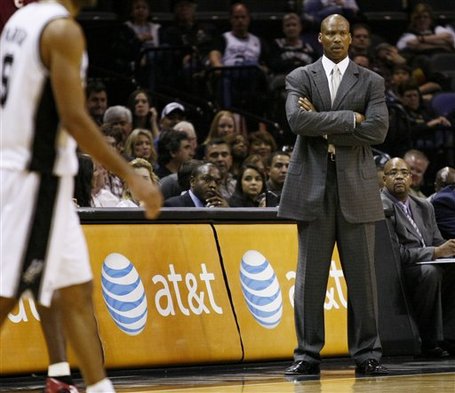 LeBron would've made me look good in this suit.

Not Much Ado About the Cavs

I don't know jack about the city of Cleveland other than their basketball team, and that team just sucks right now. Mo Williams is their only really good player, and after that, the talent dropoff seems pretty steep. Antawn Jamison has fallen so far down the NBA's star pecking order that he practically disappeared in the second half after pwning the Spurs in the first. Hickson and Varejao really don't scare anybody in the low post save for their aggression, Anthony Parker's defensive acumen will be better used on a contending team, and having a player nicknamed Boobie doesn't exactly inspire championship dreams.

Right now, even Byron Scott's track record coaching not-so-talented teams might not make much of an impact on these Cavs. That's as much as I'll describe them. I would've guessed that after Michael Jordan kept wiping the floor with Craig Ehlo's mug that Cleveland would eventually get a break, but alas, not every franchise can get a share of the glory of winning. Certainly not now, and probably not ever. Yeowzers.

About the game, how to describe it? I felt like the Spurs were locked in offensively in the first, but seemed content to coast on defense that allowed Mo and Antawn to continually penetrate and unleash a steady supply of floaters over our big men. Despite this, the threat of Cleveland sweeping the rug under us never came, and if you've watched these Spurs in the last three or four games, it was just a matter of when they'd step on the gas and decide to end their opponent's suffering.

On a side note, Tim Duncan had 5 assists in that lead half, which I thought was pretty amazing. If he played more, he could've gotten a triple-double but we all know Timmy's not one for the stats, even if he's just the Greatest Power Forward Of All Time. (channeling inner Kanye West) Of All Time!

At the start of the 3rd, RJ's seven straight points and Blair's ballerina-esque airbending drives practically sealed the game. And then as if to double tap an already dead zombie, Manu and Tony alternated on running the high screen-and-roll with the bigs, the primary beneficiary of whom was a certain Tiago Splitter, who might've played with an extra chip on the proverbial shoulder after Pop kept bypassing Mr. Seven Feet of Deliciousness for the Red Head Goodness that is Matt Bonner. This play opened up so many opportunities that the Cavaliers defense simply imploded trying to find a way how to stop it. Ball game. 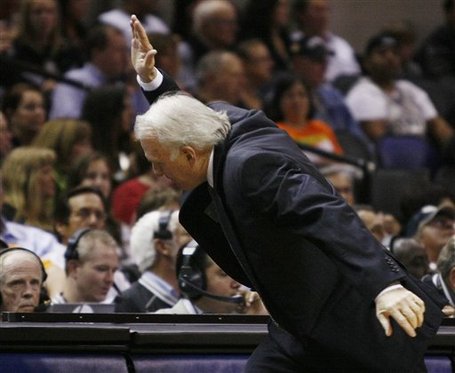 High five me you old geezer! I demand a coach-broadcaster high-five, dammit or I will kill this little fly on the announce table!

How To Construct A Team. I mean, a REAL team.

You'd think the Spurs front office combo of Pop and RC already had this down pat since Day One of the Duncan era, but I guess the last few seasons have been a real eye opener for the FO in terms of seeing the team evolve (or devolve) into pretender team status. Long story short, Tim Duncan made everything easier for them as they had to just put the right pieces for TD to be able to maximize his talents. They got him shooters to space the floor, slashers who are adept at executing the science known as the pick-and-roll, and bigs who can hustle on both ends and be smart enough to not get in Duncan's way.

To say the past few seasons haven't been the same is an understatement. It's clear that nowadays, a heavy dose of TD alone can't hold this team together, and this is where chinks in the armor began to show. Once certain teams were able to afford single coverage on Tim, it made everything on offense two notches harder. On defense, we all saw how the Suns burned us enroute to that 0-4 playoff shellacking. Sure, this was supposed to be a three-star team with Manu and Tony, but I am of the church where the belief is that Duncan is still The Franchise, the Rock, and that without him operating at 100 percent each and every game, you might as well be looking at 82 sunsets and change from October to April.

The question that was bugging Pop and RC then was, how can we win with this clearly diminished version of Duncan? Extremists already called for a rebuilding process, while others pined for another superstar to add to the aging trio. We actually tried to do the latter with the acquisition of RJ, but we all know how that ended a season ago. With the FO back to the drawing board, what to do?

Before I continue, allow me to offer a quick tangential turn in the discussion. My alma mater's basketball team is only a few months removed from having won its third-straight collegiate hoops title. The 'chip was unexpected, because we lost three of our main guys to graduation the previous season, and everyone was writing the team off. After struggling during the early part, the team finished with a flurry by beating up and sweeping the number 1 seeded team in a best-of-three Finals to capture the ring. Along the way, no real superstar emerged - almost every game, there was a different leading scorer. No one seemed to care about stats, which was further highlighted by not one single player getting any of the end-of-season awards -- no MVPs, no all-league selections.

How on earth did they win? It was fairly simple. Aside from everyone having that unselfish mindset, they all could really play. And when I say really play, I mean almost everytime, either starting lineup or bench, the team had at least four people who can create and make their own shot, sometimes all of them. Which was scary, if you were the opposing team. My friends and I call these kinds of players "ballers", because even if you throw them out there with anyone on the court, they're skilled enough to do their thing. Several years back, my school lacked these ballers, and in their place then were stiffs who were mostly on the team because they were either good-looking or looked good while playing, or hustled more than those who can actually play. Those dark ages were terrifying.

Looking at this Spurs team, who exactly are our stiffs? Matty is the likeliest answer, but even then his combination of height and shooting skill is rare enough to create a place for him in this league. After that, who else? Don't tell me it's Dice. That old piece of furniture can beat up guys ten years younger than him. I won't count Quinn or Green because they're not exactly in the regular rotation.

Gone are the days when we only had players with a specific skill or two, like Bruce's defense and corner threes, or Malik Rose's bruising and hustling, or Oberto's limited skill but insanely high BBIQ. We have plenty of people who can make shots - Manu, TP, TD, Hill, RJ and Neal. Four out of those are our starters, and if you're feeling generous, you can add &erson as another shot maker and you have three more off the bench. Blair, if he manages to slow down a bit and relax, will be in that group sooner than we expect.

Instead of wasting time trying to look for another Mr. Potato Head that will never appear, Pop took in Rage, and developed his game, adding more weapons than just his driving ability. He might not defend like Bruce, but can Bruce penetrate, stop-and-pop at a dime, draw fouls (and sink them at a higher rate) or finish alley oops like RJ? Nope. Although I do miss Brucey's out-of-nowhere I-didn't-know-he-could-do-that jams.

Before, we had Jaren Jackson and Mario Elie to can long bombs, defend a little, do a little celebratory jig once in awhile and nothing else. That was also RMJ for the past two years (big balls dance, anyone?). Now, we have Gary Neal, who can not only shoot and defend with ferocity, but can put pressure on the opponents with his drive and deadly floaters. Oh, that sounds a lot like George Hill, too.

And based on this game, Tiago's not just a Rose or Kevin Willis or Oberto clone, although all were badasses.

After that playoff loss to the Suns, Pop and RC knew they need people who can actually play (as Sean keeps saying to describe Splitter), and not just feed off a superstar. The result so far has been a pretty destructive offense, and on defense, it can only get better. Best team ever that Duncan's ever had? You bet.

Even if Anderson's gone down, the team hasn't missed a beat, and that's the sign of a quality squad from top-to-bottom. Sure, the Big Three still makes everything easier for everyone else, but now you can also pay a similar compliment to the others - because of them, the Big Three's lives are also easier. I'm betting Timmeh's been sleeping these days with a big smile on his face, not just because of the win streak, but also because of his teammates.

Of course, I might be wrong (I most likely am) and at some point, some team will expose our weaknesses. But for now, since this is, after all, my first ever double digit win streak as an active member of PtR, I'll savor every bit of it and I'll say whatever I want to say. Is it too early to be hopeful like this? If you're already at the twilight of the GPFOAT's career, I'm pretty sure nothing is too early.

3 - Tiago Splitter - How do you earn more PT? By playing the PnR to perfection and defending like it's Game 7 of the Finals. NBA career high 18 points, 5 boards (3 offensive), 2 assists, 2 steals, 2 blocks and a few hundred more new female and male fans. I thought of putting the Player Lock on him for this one but it's the Cavs, so it might not give an accurate read of how he plays against good competition.

1 - Tony Parker - Le Baguette continues his rampage with a 19-5-9 game. If he plays with the kind of fire he's shown in this win streak, I'm scared as to how much W's we can get.

Up Next: A true test at home (thanks for the correction, fellas) against the Orlando Magic, which is kinda built a bit similar to the Spurs, starting with their franchise center in Dwight Howard. He's no Tim, but he's still two handfuls and two feet-fuls for any team.