The Cleveland Cavaliers came to town just a shell of their former team, and after letting them finish the first quarter ahead by one, the Spurs went to work. No starter played more than 28 minutes, and every Spur who entered the game finished with a "plus" score in +/-. Three bench players scored in double figures, and Tiago Splitter had his breakout game: 26 minutes, 70% shooting, 5 boards, 2 steals, 2 blocks, 2 assists, and survival of a "clothesline" under the rim. For his efforts, he was chosen Impact Player of the Game, and had to face his most terrifying moment of the night: a post game interview on the court.

More photos at No Sympathy for Cavs 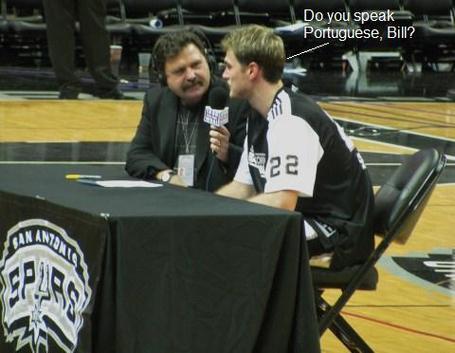 Last week's sneakers belonged to George Hill, and the Chicago Bull with the black leggings on was Korver. To whom do these sneaks belong? 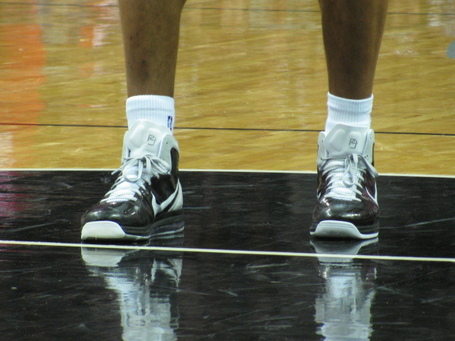 And the photo awaiting a caption (remember, keep it clean) was taken during introductions: 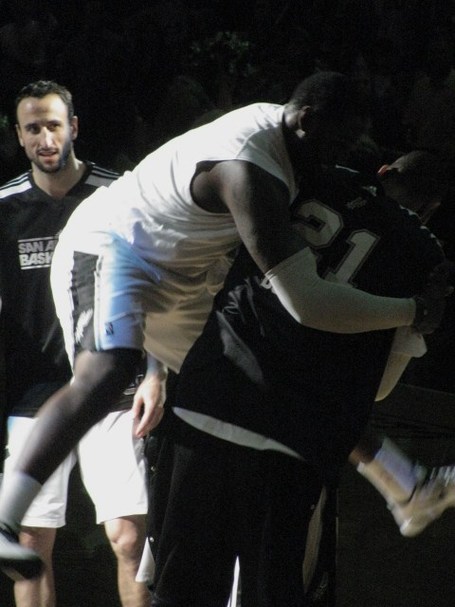 In the first half, Manu had a nifty pass to DeJuan that is on the highlight reel. Here is the end of that play: 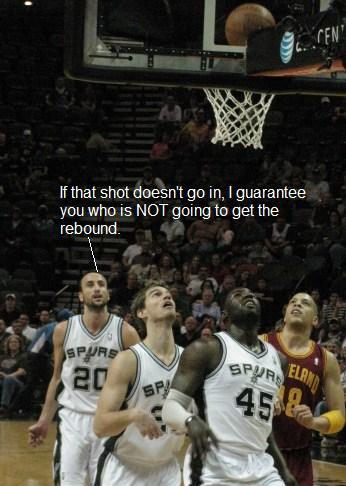 Anderson Varajao clobbers RJ in the back of the head as he prepares to go up for a dunk. Ironically, it would be Parker who would need medical attention after this for a bloody elbow. 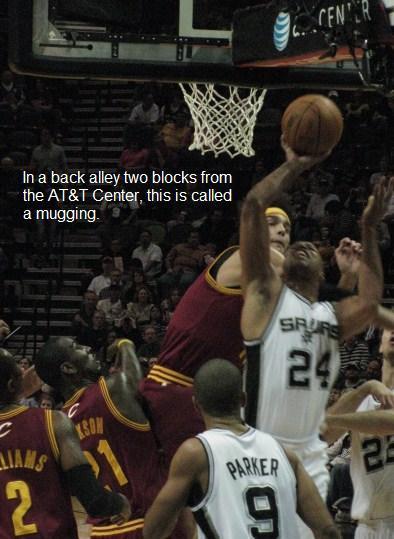 Jefferson would get his revenge a few plays later: 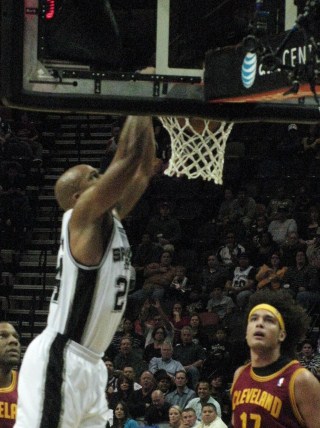 My camera just kept finding Anderson Varajao having a bad night at the office (guess only one Brazilian can be a star in a game): 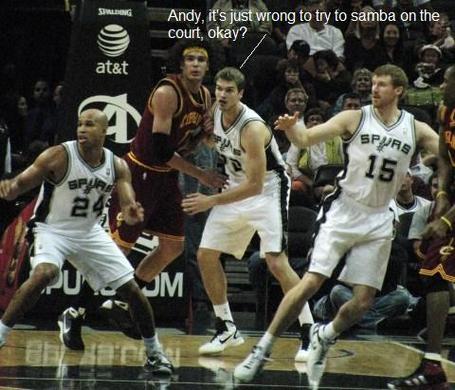 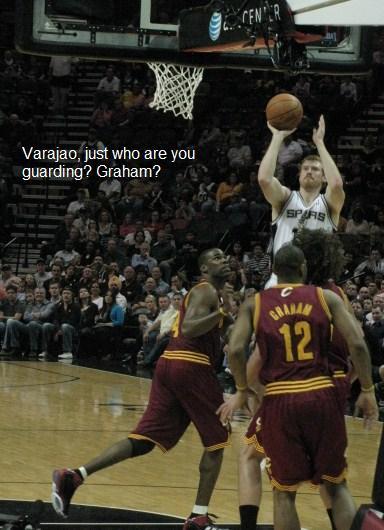 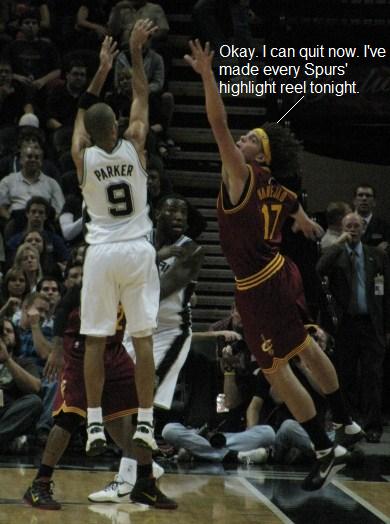 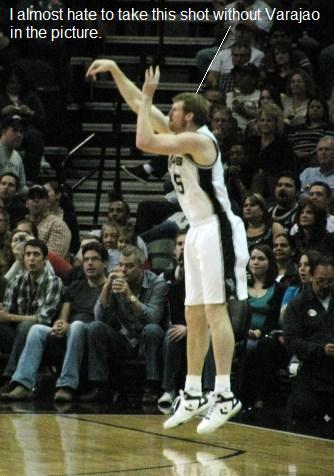 And then there was Manu working his magic. I keep humming that song from Cats - "Magical Mister Mistoffelees" - "oh, well, was there ever a cat that was so clever as Magical Mister Ginobili..." He scored eight points in 70 seconds in the second quarter - here's the last three of those, with Gibson all in his face: 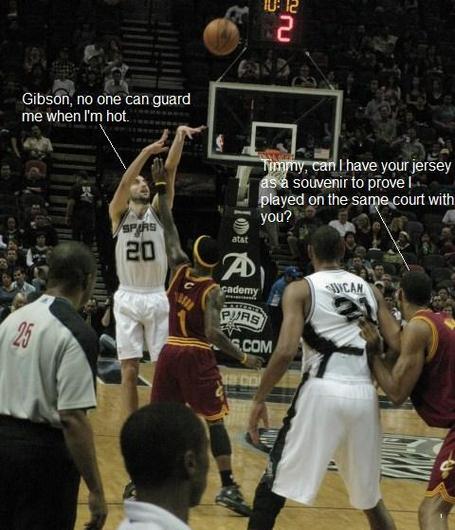 And then the human highlight reel pump-faked, weaved his way through several defenders to the basket, and at the last minute switched the ball to his RIGHT hand for the lay-up. And I have not seen a pro photo from this angle yet - a PTR exclusive! (Express News has one, but he still has the ball in his hand.) 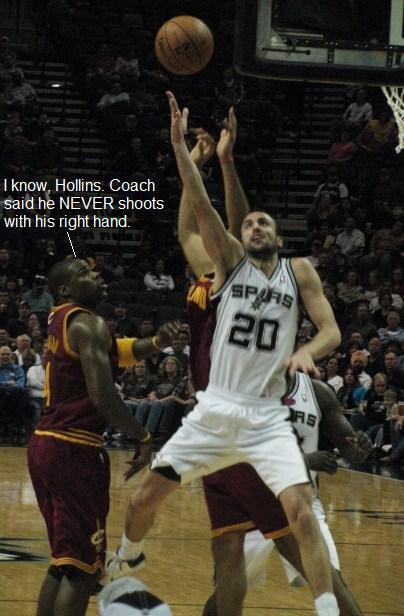 Soon after that incredible lay-up, Manu made the highlight reel again, this time for a beautiful assist to Timmy for the slam - and I promise it only looks like Tim is laughing (but he sure enjoyed it). 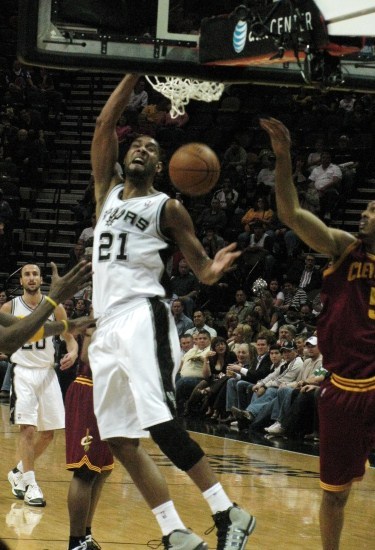 Tony finished with 19 points and 9 assists, and no screaming from me to pass the ball. 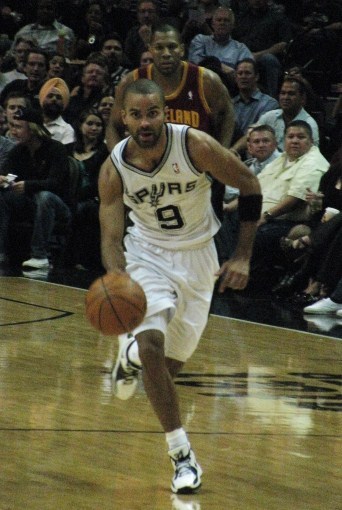 Finally, my two seatmates and I decided that Antonio McDyess is the most under-appreciated Spur, so we displayed our tribute to him with signs as the Spurs were warming up just before the game. Duncan and Manu noticed at about the same time, and alerted Antonio, who gave his "aw, shucks" smile, knowing he was in for some good-natured ribbing from his teammates. At the half, however, on his way to the locker room, he looked up our way and waved and smiled. 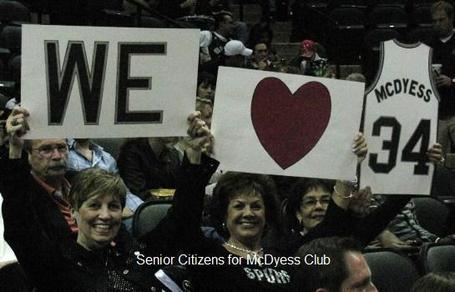