Do you know what you get when you search for images of Gregg Popovich? A picture of him yelling. 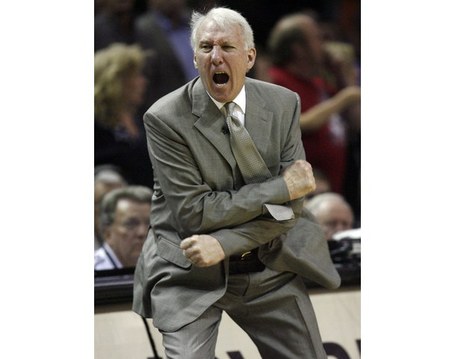 Do you know what you get when you search for images of Jerry Sloan? A picture of him yelling. 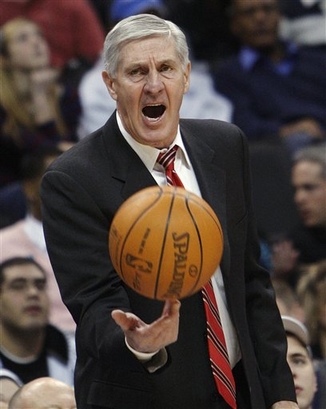 If I were to ask you who said the following, you'd probably default to Pop.

"I could have passed the ball into Yao sitting on the bench he was so wide open. He got what he wanted and we didn't put any defensive pressure on him."

But you would be wrong. Coincidence? I think not. The CIA should be proud.

And now, your resident hack preview.

PG: Despite the outside distractions, Tony played a whale of a game against Chicago. The Wee Frenchman is still dishing out the assists, along with getting to the basket for his wacky layups, but Williams is the top PG in the league, in my opinion.

SG: Raja is going to get his Bell rung when Manu whips by him for another otstanding dunk!

SF: Even when he isn't playing well, RJ is playing well this year (read it again - that does make sense). I'm giving the edge to RAGE, because he's become more explosive this year.

PF: Millsap has been a beast this year. DeJuan, not so much.

C: Jefferson seems to have fit in well with the Jazz. Timmeh hasn't had to carry the team this year.

George is playing better, Matt is shooting lights out, and Tiago could do well, considering the Jazz don't have a strong bench down low. IT'S OKAY TO PLAY THE BIG NEW GUY, POP! CDECK WOULD APPRECIATE IT! Other than Miles, the Jazz bench seems a little thin, but it certainly hasn't hurt them on the comeback trail.

Usually I would have this as a tie, as I respect the hell out of Sloan. He's a great coach, and it's a shame he's never won COY. However, he will not be at the game in order to attend a family funeral, so the advantage goes to his CIA brother.

The Jazz put together an unbelievable string of comebacks these past two weeks. These guys are tough, and I, for one, won't feel comfortable with any lead.

We pulled out our own version of the comeback against the Bulls.

Yes, we're on the road. Yes, this is a FIGABABA. But the Spurs' sheer offensive weaponry, along with the absence of Sloan, should give us enough to continue the early season roll (I hope).

48 Minutes of Hell - You know the drill. Best analysis on the Spurs-o-net.

SLC Dunk (SBNation) - They're a little miffed that Millsap isn't on the All-Star ballot. And they should be.