So there are a lot of good movies out, with Stampler already mentioning some of them in his last recap. I haven't watched any of them, but I do plan to see Due Date, at the very least, and then Easy A, just because my current flame Emma Stone told me to. There is one movie that just concluded its run in most theaters, and it's the last movie I've watched so far: The Social Network (97!!! on RT, 95!!! on Metacritic). To be honest, I enjoyed it. It might be a little bit over-the-top and sensationalized, but heck, that Zuckerberg fellow is richer than the rest of us so he probably deserves to look geekier than he is in real life.

What does this have to do with the Bulls and the Spurs matchup tonight? Absolutely nothing. So before we forget about that movie chronicling a young snotty billionaire's not-exactly-humble beginnings, I do have a few Facebook screenshots in his honor, and then surprise, surprise... an actual preview. I don't exactly feel good about facing the Bulls. I've always felt they were a bad matchup, but what the heck. Let's jump this.

I've missed out on all the BABA game thread fun the last few days because of a couple of things. One, it was the weekend when my buddies and I held a bachelor's "weekend", instead of the usual party, to celebrate the first member who'll get married in our high school class. We went out of town in this one, and while these bachelor thingies are supposed to contain a lot of adult fun, I entered the trip a little pessimistic. My friend's wife-to-be issued us an order that she's having none of that stuff similar to those legendary stories told in movies such as The Hangover, so everyone was pretty much expecting a sausage-fest weekend filled with a thousand awkward moments between thirteen guys that I can probably make a Razzies-nominated film out of.

However, you just don't put guys together in one villa, miles away from the capital, in the country's port city where Americans and their bases used to hang out, and expect them to oh bee-have themselves, right? So just to make a long story short and wholesome, a friend was showing the groom-to-be some of the photos that we've taken so far during the trip. It started with pictures of us drinking, playing poker, drinking, playing Rock Band, drinking some more, and then a sudden time warp to us watching the Pacquiao-Margarito fight the following morning (Sunday in Manila). Where were the pictures from that Saturday night, the one where the fun supposedly happened? Exactly. 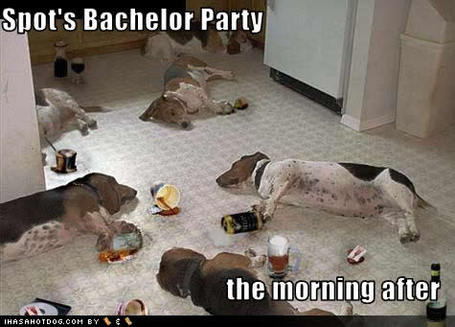 Visual representation of the past weekend's festivities.

The second thing, as already mentioned earlier, was the PacMan fight. Sure, almost nobody cares about boxing nowadays, but just like the other furriners here whose worlds stop when an event to showcase national pride is happening, I had that sense of duty to drop everything and watch one of the greatest athletes of our time. Now that all the punching's over and Pac goes back to his political life, I'm ready to tune him out and move back to basketball, thank you. 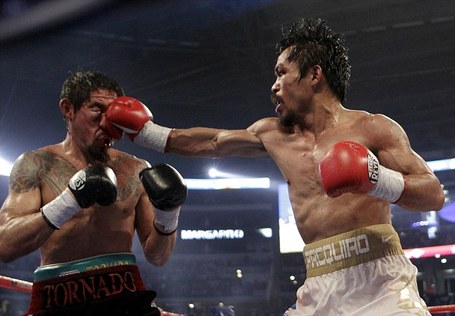 While poring over the photos, have some old school music with a new twist. Because everyone needs to appreciate the past.

Or if you want something else, here's an awesome band with a song to make Pop proud.

Let me give you a little bit of a peek at how I come up with crazy ideas for previews. I'm in the second year of a three-year Master's degree course, and this year is so far the worst in terms of classes. All but one of the subjects I've attended or currently attending are incredibly boring, and I have to sit through each three-hour subject, with a schedule of 6-9 pm, waiting to see if that "press button to eject self" scrawled/vandalized on my desk (not me, I'm innocent) will actually result into what it says.

Anyway, what I usually do to stay awake is to take notes, even if I couldn't understand a damn thing about the lessons when the teacher is talking to the blackboard for three hours. But the worst instructors are so bad, you couldn't take any notes at all. So what I do is scribble on my notebook for the entire period -- sometimes I trace logos of the notebook's brand, re-invent my signature, diagram different variations of the triangle offense (kidding, of course.. or not), draw my classmates, or write down stupid ideas for PtR. There. If ever you feel you've had enough of these hack jobs, you're welcome to call my professors and tell them to stop being boring so that I can be a little bit more productive.

I made one of these for a game against the Warriors. I kind of intended to resurrect it when we play the T-Wolves, but caved in (i.e. ran out of ideas) and made it early. Anyway, let's get to Facebook-ing. 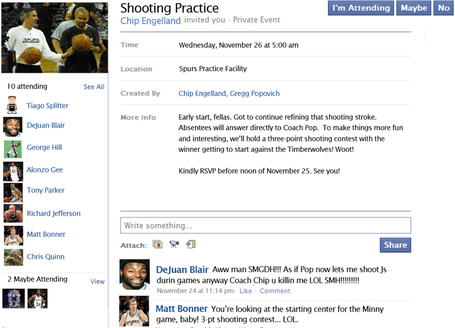 Of contract extensions and passing the ball. 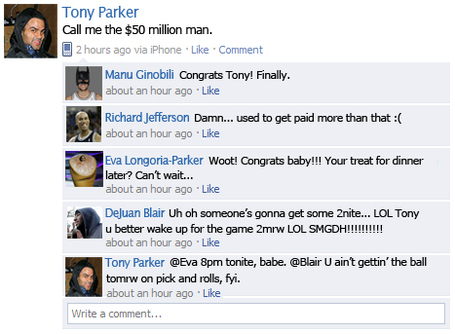 The value of minding your own business, as demonstrated by Rage. 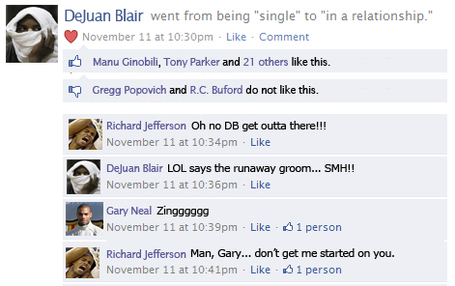 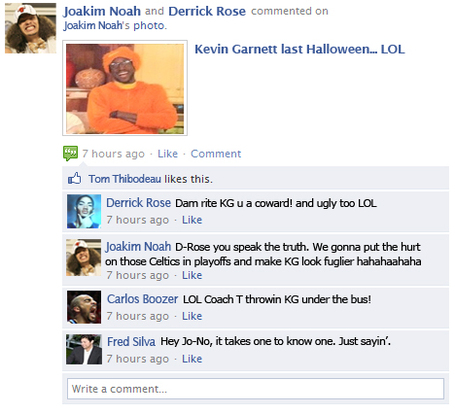 The quest for pulling off something similar to the great Pau Gasol theft. 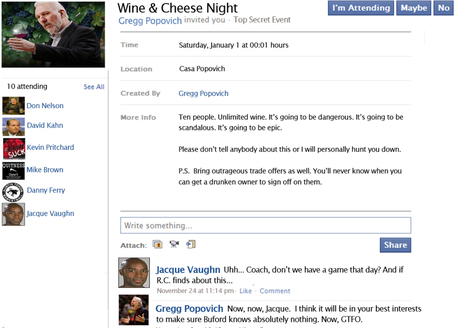 I could've made a couple more, but I gotta study. Riiiiiiight.

Pardon me if I've messed up the table below, I'm no good at html or whatever it is you kids call it nowadays.

Lastly before you go to the actual preview, make sure to Like PtR's Facebook page, if you haven't already. Now, GO!

PG: If only Tony Parker wasn't playing so well, I would've easily given D-Rose the advantage here. Rose, like Frenchie McWonderbutt, is also having a career year in assists, averaging 9.5 this season after recording about 6 assists per game in his career. Hmm... I wonder what's up with all these wanting to rack up assists among PGs. But as long as Tony passes the ball to Manu, I'm not complaining.

SG: Hello, Bogeyman. Nice to see you again. Prepare to be destroyed by His Manuness. He will show no mercy even to past teammates.

SF: Am I on the RJ doubt-wagon, still, by putting the edge on Deng? I might be, but I think I have very good reasons to respect The Luol. Deng's had a 40-point game already this season, and seems to have developed a reliable three-point shot, just like our own Rage 2.0 Plus, Deng's a master at the midrange jumper, something which has been a weakness in the Spurs defense the past couple of seasons. Hopefully the coaching staff can make the necessary adjustments, and that RJ can again do a decent job on defending Luol.

PF: Timmy's been on cruise control the last three or four games, but he'll face a stiff challenge with the big men of Chicago. Let's see if he's been playing possum all this time. Taj Gibson is a pretty effective big man - can rebound, block shots, defend and score some - makes me wish that we should've drafted this guy.

C: Jo Noah is ugleh with a meh, but he always kills our bigs with his energy and hustle. I think in the 2 losses the Spurs had a season ago, he and Rose really made the difference.

With the Booze-man still out, the Bulls' bench looks considerably weaker compared to ours. Still, they have some deadly long ball specialists in Korver and Watson, while Brewer, back in his Jazz days, have always played well against the Spurs. After that, Chicago is pretty thin upfront with Turkish newbie Omer Asik and Bonner Mirror Image Brian Scalabrine bannering the subs. Ex-Spur Kurt Thomas is also there but more than his crazy eye, his declining skills due to age isn't something I'm worried about.

Tom Thumb-odeau was a really good defensive coach back when he was with the Celtics, and I expect him to do his thing with the Bulls as the season progresses. I just hope he hasn't seen or studied enough of our new guys yet to develop a plan to effectively contain the new B.A.M. And of course, he can't contain Manu. No one can.

As for Pop, he has more rings than Thib and has been so far "sensible" with his lineups and rotations that has the team off to a flying start, so no doubt who gets the spur here.

The Bulls have surrounded Rose with guys who will hustle their behinds on both ends of the floor, and they always seem to get the breaks. If the Spurs can't match the energy of this young team, expect a long night.

Is there such a thing as revenge mojo? So far the Bulls have had our number, so we need to continue the Payback Caravan.

It's good that we've taken care of the scrub teams to cushion our 2nd home loss of the season. Yeah, I haven't drank the Kool-Aid... not just yet (although I'd like Tim C.'s and CapHill's spiked version if I do finally drink it).

48 Minutes of Hell - You know the drill. Best analysis on the Spurs-o-net.

Dance Moves Can Reveal Your Personality - Hmm. I'm not sure.

More Chuck & Beans goodness - It's a Zombie World out there.

The proper way to make hay using a sucker punch. 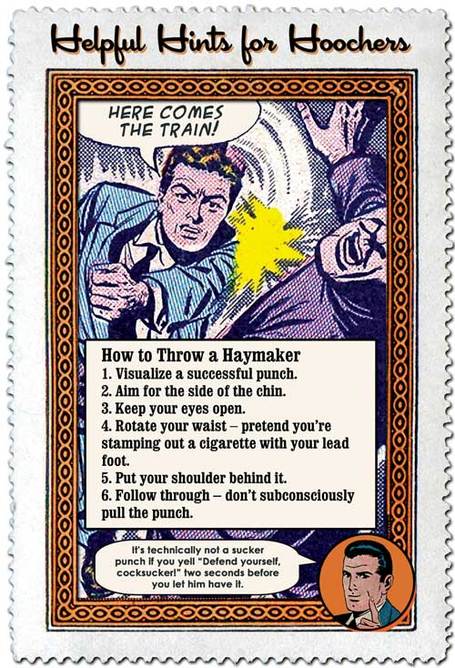