Share All sharing options for: Game #2 Recap: Spurs 90, Hornets 99 - The Storm Before The Calm

Win the opener, lose the next. Feels a lot like last year. Or maybe not.

Jump in for a quick-hitting recap that will hopefully ease the early loser wounds a bit. And as always, some tremendous in-game photos from janieannie.

A Tale of A Half, A Disaster, and A Silver (and Black) Lining 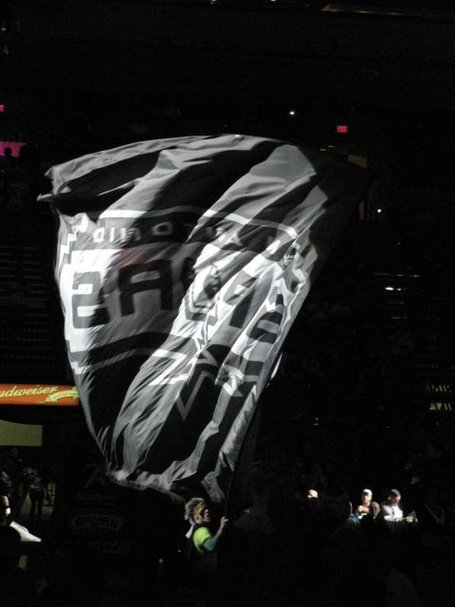 Let me give you three views on what the 1st half looked like:

a) Spurs defense is baaaack - We held the Hornets to 43 points in the half, compared to the 66 we gave up against the pace-crazed Pacers.

c) It was just a sloppy game - The teams turned over the ball way too much (7 TOs each in the 1st quarter) and just missed a ton of usually makeable shots.


I hope the team doesn't even think about option (A) to make themselves feel good. Strictly speaking, we stunk up the joint. The only thing that saved us from having a bigger deficit was our free throw parade in the the first quarter, and effective slashing by Manu and Tony.

And then the NOOCH slowly started to take that away, along with Marcus Thornton hitting some crippling fadeaway jumpers -- the kind that makes you think if this keeps on going, we might as well hire a sniper to take the guy out. Damn Thornton shoots lights out everytime against the Spurs, you'd think he was God disguised as Marcus Thornton or something. 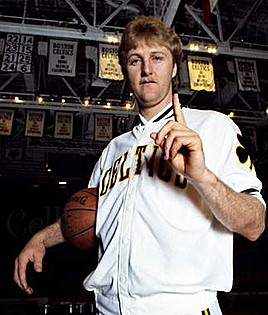 Actually, it was Larry Legend in the guise of Marcus Thornton.

Yeah, Larry, God doesn't only suit up as Michael Jordan - occassionally he dresses up as Kobe Bryant, Chris Paul, LeBron James, Channing Frye, Jason Richardson, and Goran Dragic. But on this special Halloween, he thought of donning an ugly mask and went with Thornton instead.

And oh yeah, David West ate up DeJuan Blair this game. West shot jumper after jumper in Blair's face and the poor sophie couldn't do anything. To be fair to The Beast, D-West is also another one of those players that feel like it's Christmas whenever he plays the Spurs. Makes me hate Christmas, sometimes. If only the belief that "bad people don't get any presents" is true, the Spurs would've won a championship every year David Robinson AND Tim Duncan were in the league. And Michael Jordan would've had no rings, so... scrap that idea. 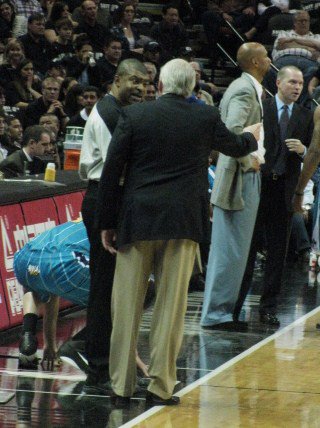 Pop: "You gotta eject whoever that Mbenga guy is for wearing a Halloween mask while playing. That's illegal!"

Pop: "Then what's that? Something he was born with?

Ref: "Mmm... yeah, I guess you could say that."
via janieannie (sphotos.ak.fbcdn.net)

Just when you thought, after seeing that first Suns-like game against the Pacers, that we'd have no problems at all on offense, we got a heat check this quarter. Honestly, I'm quite disappointed about the lack of adjustments after the half. Somebody should've pointed out that NOLA was heating up with those 26 second quarter points, and formulated a plan to put punk-a _ _ CP3 and his merry band of jumpshooters on their collective behinds. Instead, what happened was a parade of points that I think started with an all-too easy Thornton steal after an inbounds pass. Manu practically gave him the ball as if to dare the little man if he could dunk. Ouch.

A couple of Thornton jumpers here, some David West mid-range shots there, and a sprinkling of Scrappy Doo long range buckets and we were staring at a 33-point third quarter Hornets explosion. The Spurs' defense had a little something to do with it, too, allowing most of these shots to be fired unmolested. I'm thinking of giving everyone in Texas a free pass since the Rangers needed to win that Game 3 of the World Series, and the Spurs players probably were thinking about that, too. I'm most likely saying BS, but I don't know, somebody give me a reason to think why the D crumbled like that. 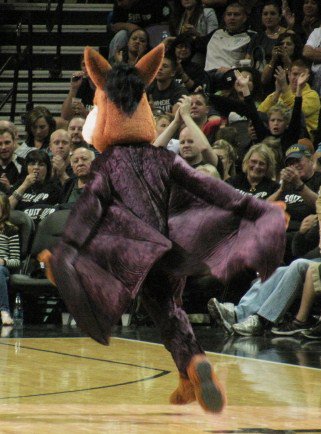 Visual representation of how the Hornets "flew" away with this one.

How about the offense? For starters, we didn't score in the last four minutes of the quarter. I'm having a hard time remembering that lineup but I think it was Parker-Neal-Jefferson-McDyess-Blair. I remember Tony the most because it seemed like he was back to his dribbling nowhere, jacking up shots mode. Kinda makes you wonder if he got his extension too soon, but I don't really wanna go there and start another litany of "Trade Tony" or "Worst Extension Ever" posts. Dice and Blair also missed a few chippies, and allowed Jason Smith to blossom into a superstar for all of four minutes. 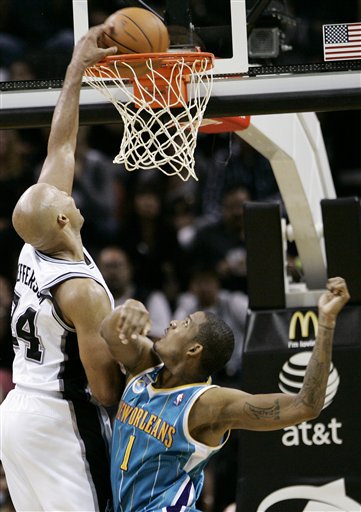 When all else fails, cram that chit down.

Early morning, April 4
Shot rings out in the Memphis sky
Free at last, they took your life
They could not take your pride

If it feels like I'm all furious about the loss, I feel the exact opposite, actually. In a world where wins and losses are the only measuring sticks, there are no moral victories. BUT, that being said, it's still hard not to find good things about this loss, considering that it's just the second game of the season.

The sample sizes are still inconclusive, but Rage is starting to finally pump some much-needed blood into the heart of this ex-champion team looking for a last shot at glory. Two games in and he looks like a different player, one who's out to regain some lost pride, one that was beaten to death a season ago.

The guy refuse to gave up, and it lifted his teammates. I think he scored only two points in the first half but went berserk for 16 in the second half, most of those points in the fourth. He did miss that wide open three that would've tied the game and tore the batcave living atop the AT&T Center, but the missed threes were practically one of the recurring themes of our offense this game, so you could argue that he just kept in step.

I particularly liked one stretch where he FINALLY got to realize that he had to score or just do something to wake his teammates up. A made up RJ train of thought: "Hmm... wait, no Timmy, no Tony. Okay... there's Manu, and then George who's not really shooting the ball well. Neal's a rookie and Blair's having a bad day, and then there's me. Wait, what the hell am I doing? I"M THE SECOND OPTION NOW AND I HAVE TO SCORE!"

And score he did - with two surprisingly confident pull up jumpers (one off a broken play that was all net) and a jump-out-of-your-seat up-and-under slam over Trevor Ariza. Defensively, I thought he did a decent job, not that Trevor's an offensive juggernaut anyway, but he kept Ariza from getting into the flow of the game where he'll wreak havoc on both ends. 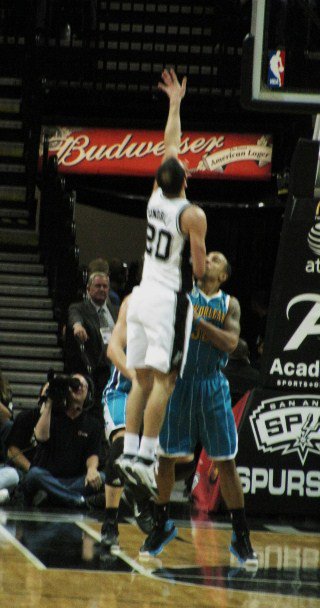 One of a million ways NBA players say hi to their family in the stands.

Of course, you can take that all away from Jefferson and say he just benefited from Manu being there, owner of the never-say-die gene that just refuses to lose. I'm happy that BatManu tried his darn best to rally the troops and show Pop that we're not throwing the white flag too early like we used to. What I'm not too excited about was the atrocious gunslinging from distance, where at one point he missed seven straight. Ended up 2-11, and that one open three in the fourth he also missed. Our players are officially scared of open shots. It's a frickin' disease, people.

After Anderson's welcome last game, it's now "Welcome to the NBA, Gary Neal!" He was instrumental in that comeback as well, and it's good to know that he won't be a smaller Roger Mason, Jr. At least not yet. I liked his pitbull defense -- chased Thornton around and cooled him down a bit. He even looks the part, too. Hopefully he can shoot it consistently and that this showing earned him a few more minutes.

I'm also quite glad that this didn't turn out to be that Bulls game last season when the team went to Chicago after that rousing opening day win, then proceeded to get their butts whupped by double-digits.

The (S)Hit List, or players I just want to call out 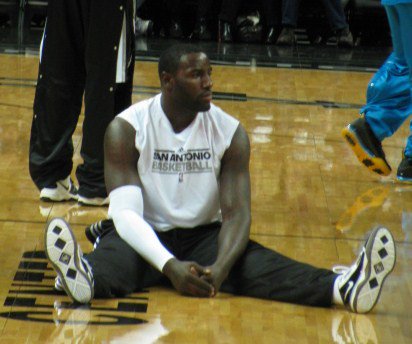 Blair has a sad.

DeJuan Blair - I got my ear bleeding after hearing Sean Elliot say a million times for Blair to calm down and work patiently. Which reminds me, he really does seem to be wired like Manu -- players who thrive under chaos. He was at his rebounding best in that dizzying rally, and had some monster glass-eating boards. Now only if that translated to some offense.

Tony Parker - "The Extension" or $50 million Man got extended time on the bench after some poor second half play.

Tim Duncan - Not a good night for Timmeh, going 2-10 and missing a number of easy shots. Law of averages after going 10-12 the other night.

George Hill's shot - Still MIA. The two straight missed OCEAN-WIDE open corner threes in the first half was shocking. If you can't hit your bread and butter spot, it may be a concern. Liked his defense on Paul in the second half though and the 7 assists, so keep your head up, kiddo.

Your Three Stars, even though I don't feel like giving them

(2) Richard Jefferson -- 18 points, 4 rebounds and 3 assists. Take LeBron's usual stats and halve it, and that's where Rage was at. A half-LeBron. I'll take it.

(1) Spurs Front Office -- Much rejoicing with the crafty and well-timed Tony Parker extension.

Finally, a few bonus goodies from our jolly good leader, jollyrogerwilco, who was at the game: 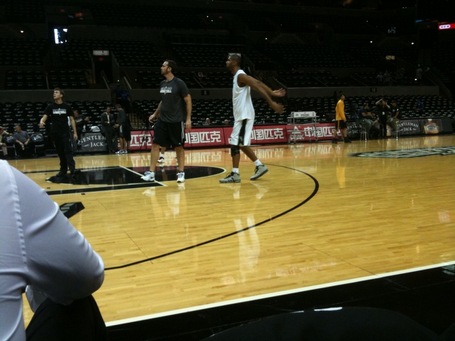 Blake Griffin and the Clips await on Monday. Oh yeah, finally some Tiago Splitter action, too.