Sweet-Shooting Spurs ambush the Ex-Tiago Splitters, 108-85 (a.k.a Temper Your Excitement)

Share All sharing options for: Sweet-Shooting Spurs ambush the Ex-Tiago Splitters, 108-85 (a.k.a Temper Your Excitement) 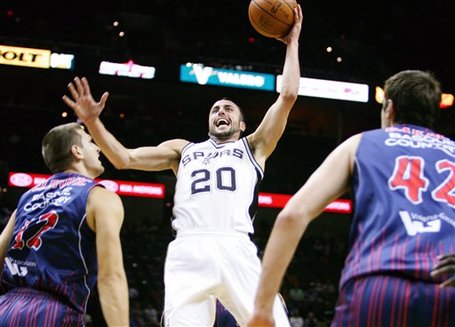 Welcome to the Big Dance, boys.

If you haven't read it yet, Scott Sereday from 48 Minutes of Hell crunched the numbers to find out if preseason games could be a good indicator of a team's performance in the regular season.

Heading into this game, the Spurs' record was at 2-2, and if you've been following the team and the NBA long enough, you'd probably scoff at the notion that having a good preseason could actually lead to a similar result when the games start to matter. With the Spurs battling a Caja Laboral team laboring (heh) over the loss of its best player to the Big League, this great preseason = great actual season theory still probably won't get any traction nor attract that many believers.

After the jump, some impeccable shooting performances, candidates for new nicknames, and why the Euroleague could be ahead of the NBA, in one aspect.

A mad but possibly talented 'mate from Australia once recapped, haiku-style:

While winning big seemed to serve as sort of a panacea for the previous game's U-G-L-Y loss, I'd rate this win as the least significant of the preseason, and yes, even including the next few games up ahead. That's because while Caja Laboral is one of the better teams in Europe, it is, in no shape or form, an NBA-caliber squad. Let's just get that out of the way, mmmkay? 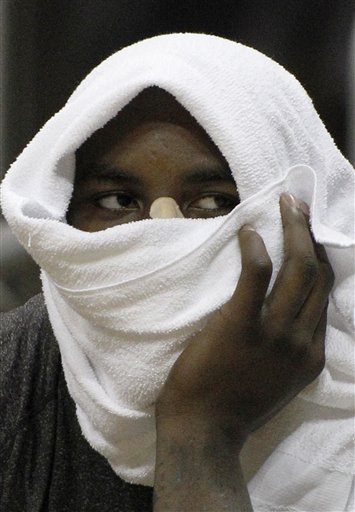 Someone forgot to take their breath mints today.

Since the average attention span of PtRockers is about 2.1 seconds, I'll blaze through a list of some players I thought played a good game. Just to mix things up, Pop-style, I'll put the 3 Stars first and then the honorable mentions after.

I think listing him at 6'4" seems a bit generous. He's quite small and I'd recommend to him these 4-inch man-heels to gain a little more height. Despite that and being the natural scorer that he is, he can get his shots off, no biggie. The only problem is making them fall. Tonight, the rim was kind to The Nail as he finished with 12 points on 5-11 shooting with 2 three-pointers, 3 rebounds, 2 assists, and 2 steals. Not a bad line, at all. And I thought he defended with intensity and kept fighting through a lot of off-ball screens Caja ran for its shooters.

Even in limutes, DeBeast continues to impress. He finished with only 4 points but had 12 LOLbounds, five of them coming off the offensive glass. Someone from the game thread mentioned, that at some point he nearly out-rebounded the visitors. He still has some difficulties finishing over bigger opponents, but he'll get there.

For stretches there, the Wee Frenchman looked like the 2008-09 version, making the Caja guards eat dust and toying with their big men in the paint. He probably scored 6 or 8 straight in one sequence. You could see Tony returning to form just by the way he pushes the ball up court. There were times when he'd fake out the defense by running a secondary break off a made basket, and then pulling back at the last second to set up a play. And I think he could be slowly realizing, while still not completely straying off his usual game, that he has more teammates now that are capable of making shots. 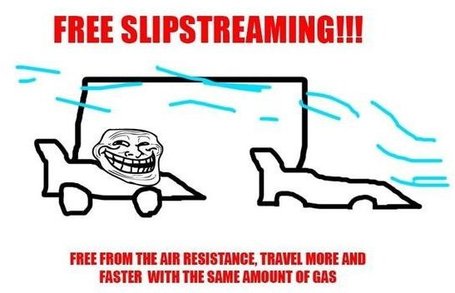 Once in a blue moon, live streaming comes free.

Richard Jefferson - I thought he was aggressive when he had to be, fished some fouls and made a threebie.

Tim Duncan - Looked slow for most of the game but hey, you'll never know with preseason Timmeh, or even regular season Timmeh for that matter. But when I checked the boxscore, I was reminded once again why Barkley calls him Groundhog Day: 10 points and 11 rebounds (5 offensive) in 15 minutes.

James Anderson - Still a bit hesitant to shoot, but a very capable player nonetheless. He had a nice off-balanced layup.

Antonio McDyess - Could've been my 4th star. He was really comfortable out there and hit teammates for some easy buckets, as you can see with his 6 assists. Still think our frontcourt is a bit undersized but with warriors like SAM, I can roll with it.

Garrett Temple - I'm really liking this kid's size, which will really be an advantage once he learns to use it often and to full effect. I'm rooting for him to earn a spot in the regular rotation.

On the Other Side of the Equation 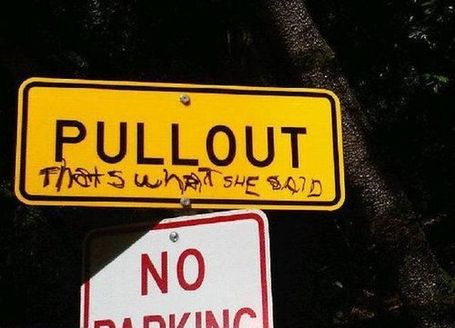 Caja Laboral likes to shoot a ton of threes. Guess you could say the same for a host of other European teams, the Phoenix Suns, the Golden State Warriors, and the New York Knicks. Caja chucked up 26 attempts from distance and made only 7 for a measly 27 percent.

I thought Stanko Barac (Number 42) was the only one who played hard. He battled inside and even schooled Duncan in one play. Got schooled right back by the GPFOAT, however. Lesson learned: no one shows off Mr. Duncan and gets away with it, buddy.

I was expecting a shootout between Ginobili and FIBA World Championship hero Marcelo Huertas, but it didn't materialize. Huertas kept his shot-happy tendencies in control with only 6 points, but was able to register 9 assists.

Observations of Randomness, because that's what we do

PtRocker In the 666 has his own Nicknames Dictionary. (Curly, BigFun, BabyCorn... guess who's who)

Tiago looks good in a suit. 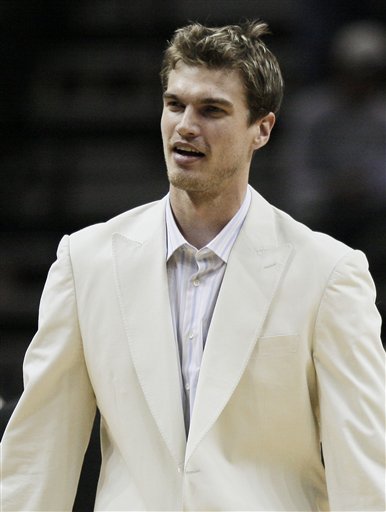 Trying to make up for missing International Suit Up Day, eh, Tiago?

The Euroleague one-ups the NBA by fulfilling what some fans have been clamoring for: a broadcast free of dumb commentators (except for Bill and Sean, of course).

Tim Duncan got poked in the eye in the first quarter, and just when everyone was expecting him to call it a night, returned to play some good basketball. Way to go, Timmeh.

After the game, Pop talked too closely to the Caja Laboral coach, I thought they were going to... uh, you know. Yikes.

Chilai wants to go to jail.

These are the kinds of things that only geniuses like Manu and yours truly come up with. 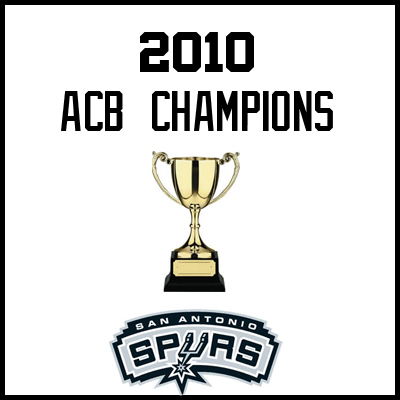 See you all next game. Deuces.