I attended the Miami game Saturday, and since there wasn't an official game recap, I will subject you to my side of the story and some poor photos after the jump.

After watching some highlights of some NBA preseason games, and seeing that not many fans attended their home games, my friend was not too sure if the game would be worth all that money we paid for it. After all, we saw how empty the seats were for the Maverick's first game, right?

WRONG! You can't compare Spurs fans with any other fans in the NBA. It was a sellout game, and fans were doing the wave for a good part of the third quarter.

Our starters beat theirs until Pop subbed Dice for Tim. At the point Bosh had zero points and not for a lack of trying, and he only scored one field goal after that.

I thought Jerrells played too many minutes for my liking and he sucked. And after looking at box score it showed that he had 4 turnovers and 3 fouls in 17 minutes. He seemed a bit out of control.

Koo-Zaan did not wow me like he did against Houston, but he hustled and altered shots. I remember the old couple next to me asking me about him and the lady saying " I have to read about him". He won't make Duncan expendable but he ain't Ian either. He seemed like a good project.

Anderson surprised us with his great D. He looked good against Lebroom, and he dominated against their bench. He had two blocks in front of me that made me jump out of my seat. He also had two steals that I don't remember now. He is going to be amazing so we better come up with a nice name for him.

I don't have to talk about Blair, but I will. He was AMAZINE. He looked strong and fast. I saw him in front of me grabbing a rebound between Bosh and James and scoring and an one. He will be awesome this year.

RJ shots were awful, but his D was really good. I think he knows where to be and what do, for the most part. Too bad his shots weren't falling. I mean sometimes they were not even touching the rim when he was wide open. Yikes.

Things you won't read about nor hear on the radio:

Timmi wanted to play with TP and Manu and RJ and DB in the beginning of the 2nd or 3rd, I forgot, but Pop told him to get off the floor and subbed Dice for him. Some of the crowds were clapping and cheering him so he wouldn't feel bad.

Bonner hurt his left hand and wanted out. He was explaining to Pop that he hurt his hand and Pop just looked at him and laughed and went back to sit. I don't think Pop takes Matty seriously, who would?

My eyes were somewhere else in the arena when my friend told me that he just saw Manu pretending to slap Tim and Tim acted as if he was really slapped hard. My friend was laughing so hard that I feel bad even now that I missed it. 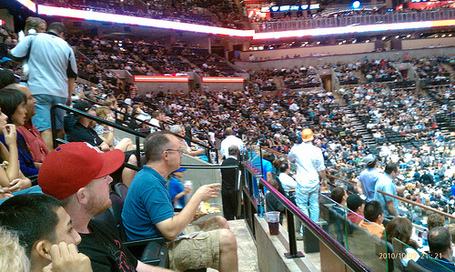 Guess where Bowen? Yes Bruce Bowen was carrying his baby(I think), and walked in front of me but by the time I got my phone out he was already there. I think I saw his baby with hands near Bruce's face trying to defend his dad. IMAG0069 (via sa_sleepless) 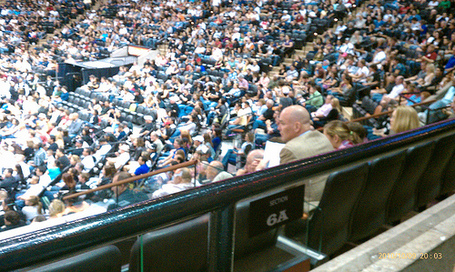 Welcome back Danny Ferry. This time you are allowed to show your disrespect of Lebroom. IMAG0068 (via sa_sleepless) 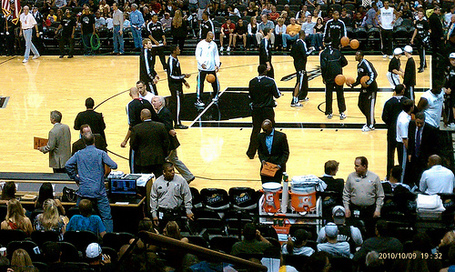 Jacque Vaughn not sure what to do. IMAG0067 (via sa_sleepless) 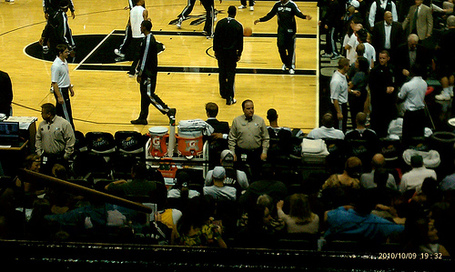 Ah, the love between Timmi and Tiago . IMAG0066 (via sa_sleepless) 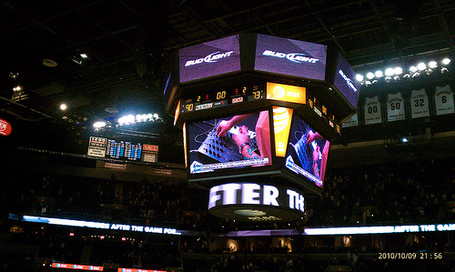 I didn't think it would end like this. IMAG0070 (via sa_sleepless)

So I hope you enjoyed my two pennies, and maybe next time I can prove that Penney does not look like Manu.