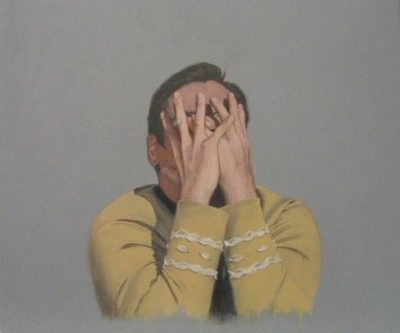 Because sometimes a facepalm is not enough

Writing a recap of one of the Games That Matter can be a blessing or a curse, depending on the outcome. Tonight it's a curse. I'm in front of my computer, tethered to my seat by a heavy heart, and I'm writing this on the fly, so expect some emotional hackiness.

A recap, after the jump.

Let's Get This Out of the Way

I know complaining about the refs can be a faux pas, especially if you're writing it in a blog that people might actually read. In the majority of the games played in the NBA, their influence, whether they make the right calls or not, is negligible at best. However, to deny they can affect the game is also ridiculous, especially in close games between evenly matched teams. This was one of those games.

As I'll recap later on, we played good-to-great basketball through three quarters, and yet we weren't able to put this game away. Why? Well, one of the biggest reasons was the 12 offensive rebound we gave up, an oddity in a season where the Spurs are very near the top of defensive rebounding efficiency. Looking at the boxscore offered a simple explanation: Blair had only played 1 minute at the half, and McDyess had played 5. Pop was so desperate that he put in Theo, but the senior citizen was off-rhythm and couldn't do much.

One of the keys to this game was avoiding small ball. A combination of bad time management by Coach Bull and a deluge of ticky-tacky fouls called by the refs in the first quarter made that impossible. Should I mention Pop being tossed from the game because of an altercate with the young and often-wrong referee Zach Zarba? (I wonder if he's at all related to this guy.)

Ultimately, the referees most likely disrupted the Spurs' strategy, but we can't blame this loss on them. Not after that 4th quarter.

A Tale of Three Quarters

For three quarters, the Spurs were as we've come to know them this season: an offensive juggernaut with mediocre defense that from time to time shows glimpses of potential. The first half had both teams fighting head to hear, never gaining an important lead and scoring in mini-runs that never managed to gather any momentum. The Spurs were a well-oiled machine on the attack, scoring as a consequence of solid ball-handling and inspired passing.

It was a cornucopia of offensive basketball: Tony's jumper was falling at last; Tim was as good as he's been all year, scoring over and around and through every Mavs player unfortunate enough to be asked to stop him; RJ appeared to have finally figured it out, scoring jumpers and forcing his way down low, and following Dirk around as well as anyone can be expected to; Manu did a little bit of everything, and was a catalyst once more for some of our more fluid ball movement of the night. I don't remember Manu ever passing the ball so creatively, day in and day our, as he has done this season. It's beautiful.

Not everything went our way: Blair's entire night was an exercise in futility. Every bump into a Maverick meant a foul against our compact beast, some of them fair, others not so much. His sole smile of the night came after a brilliant pass from Manu that left him wide open for a dunk, but the extra free throw was short - because it was that kind of night. Blair continues to show he simply can't guard tall, strong centers at this point in his development. The turnaround layups near the basket are mysteries he hasn't cracked yet, but I have confidence that a player with his feel for the game will figure it out.

Bogans was too shy on a night he was shooting well, and also earned fouls at a rate that can only be explained by witchcraft (or Joey Crawford being the main referee). Dear SAM was also foul-prone, and he never got into a rhythm offensively. He hesitated, he shot outside his sweet spots, he hurt us more than helped. And apparently he also badmouthed Coach Bull's wife, because otherwise I can't think of a good explanation for him not seeing any minutes in the final stretch of the 4th quarter.

It was even at the half, or close enough, but finally in the third quarter we played some Defense with a capital D. Mason and Hill were key in the run that for a moment or two seemed about to break the game wide open. Mason's playmaking abilities were never as good last season, and he showed off two wonderful passes in this game: one was a classic pick and roll with Tim, straight out of Manu's codec, and at one point in this third I witnessed Mason (Roger Money Mason!) pass an open three because his defender was just a little closer than it was comfortable, dribble a few feet forward, and then pass back to an open RJ for a beautiful high-arching three. It happened, people. Alas, we then tipped in a missed free throw by Kidd, and finished the quarter in a whimper.

Regardless, the third quarter was ours. Unfortunately, the fourth would be theirs, and in a far more spectacular way.

Fourth Quarter Nuclear Meltdown My Eyes My Eyes Are On Fire

We're definitely past the point of a fourth quarter collapse here, and entering the realm of nightmares and taxes. Up by 10 entering the final quarter, the Mavericks outscored us 42-23 in those 12 minutes of unimaginable pain won handily. 42 points! Take away Ericka's three at the end of the game, if you will, but that still leaves us with 39 points in a quarter. Too many. Way too many. I still can't understand what happened, but I'll try my best.

The Mavs struck first and fast. They scored in the first 4 possessions of the quarter, and the defense was passive at best. On the other end, the hoop was closed. Manu obviously had no legs after to start the quarter, and could've used some time at the bench. Tony's jumper went AWOL, and RJ grew inconsequential midway through the quarter. Tim Duncan was on his own, and as valiantly as he fought to get us back into the game, he just wasn't able to.

The game was tied in the blink of an eye, and we were 92-92 with 5 minutes left. And then Terry shot a long triple and got nothing but net. Down 3. Dyess missed, Duncan missed. Dirk grabs it, and swishes another three ball. Down 6. Offensive foul by Manu, his second TO of the quarter. Dirk gets the ball again, and makes the mid-range two. Down 8. And that was the game, as they say. 3:36 were minutes left on the clock. In 1 minute and 20 seconds the Mavericks won the game, riding the hot hand(s) and making long triples. Another blink on an eye.

There's not much to say. We've won games before because the right shots fell and because Bonner/Mason/Finley simply couldn't miss. And however, it was the lackadaisical attitude at the start of the quarter that got us in a situation where something like that was possible, even predictable.

I want to blame Coach Bull and his small ball in the 4th quarter, I really do. It was stupid to keep Dyess away as much as he did, only because he had 4 fouls, but the truth is that McDyess was subbed in when the team was ahead by 2 points, and was benched when we were down 6. His defense on Nowitski was subpar, and I actually liked RJ's job better.

Hipuks said it during the game thread: at some point we need to win against the good teams of this league. Bullying the infirm will carry us to the playoffs, but no further. The Lakers game is even more important now, if that can be true.

For the record, this was a game in which we tipped in a defensive rebound into our own basket thrice. That's three times, three. We were doomed from the start.

We have to have this, right? It's in the contract, I bet.