I've never done a QuickCap before. So here's what you get: you get my notes from the game. Lucky, lucky you. 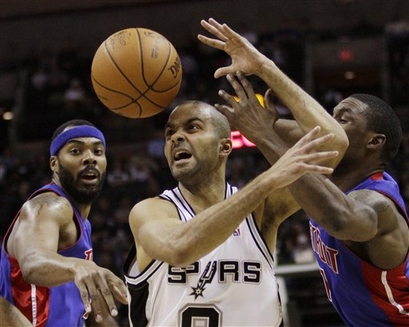 Tony Parker shoots the ball using only the intensity of his gaze.

First quarter: Good start with contributions from Bogans (quick 3-pointer to score the first points of the game), Parker, (distributing) and Blair (rebounds). Richard Jefferson is the primary offensive weapon and even gets the oop (with Parker providing the alley). Prince starts to catch fire, though, and sloppy ball-handling by the Spurs combined with physical play from Detroit keeps the game close through the first seven minutes. The Pistons take advantage of 4 turnovers as well as poor contesting by the Spurs to keep a slim lead for most of the final five minutes of the quarter, but Manu puts on his cape and scores a quick five points to put the Spurs back on top. Rip Hamilton hits a fall away buzzer-beater, though, and the quarter ends with the Pistons leading 28 to 27 and shooting 70.6%--yeesh.

Second quarter: HORRIBLE missed call sets the tone for the second quarter when Manu is inexplicably dinged for a foul on what is clearly an offensive charge by Ben Gordon. Somehow the Spurs manage to cling to the lead throughout the first half of the quarter despite getting into foul trouble (Hill picks up his third only two minutes in). Detroit ties the game on a Rip Hamilton jump shot. Bogans hit a stone-cold killer three, but woe, IUPUI then picked up foul number four. Manu TOUGH to the basket. Manu is the MVP of this quarter. That's what happens when the Sickness is charged and gets the bad foul call to start a quarter, motherfuckers. And Bogans and Jefferson are playing well together. We like. Oh ffs, the basset hound next door is baying again. And why is she outside? It's cold tonight, damn it! Spurs playing with consistency now, and Manu keeps the momentum going with a 3. Our defense is still a bit ragged, but we're playing smarter. Villanueva has the hot hand, but we're matching him bucket for bucket. We go to the half with the Spurs leading 59-52 and shooting 61.1% to the Pistons' 50%. Nice.

I'm going to go get a veggie burger from P. Terry now.

Oy, the turnovers. The fouls. Ooh, beautiful pass from Dice to Jefferson. Oh crap, 4th on Timmy. It's time for TinyBall! Well, no, this is SlightlyLessLarge Ball, with Dice and Blair still on the floor. And IUPUI hits the 3 with authoritah! The Spurs are up only 2, though, by quarter's end, 77-75. We're moving the wrong way.

Fourth quarter: Aaaand now we're tied on a Parker-esque drive to the basket by Ben Gordon. But RJ hits the 3! He still leads Spurs scoring with 17. Spurs fighting harder now, showing better defense and hustling for the rebounds. MACEDOG! All the way to the rim past Tayshaun Prince! We're up by 9 now, and the crowd is starting to get into it. And Mace gives them a reason to scream by promptly knocking down a 3! Damn, what''s our 3-point percentage? Holy shit, 58.3%. That's better than our field goal percentage (55) right now! Funny, I've always thought of the Pistons as the Bad Boys of Defense, but it's their defense that seems weak, at least in this game. Oh, hey, another 3 by Mace. He's the MVP of this quarter. TP puts the Spurs up by 12, and I can see the exasperation on the Pistons' faces. That more than anything spells the end of the game to me. Sure enough, TP makes the sweet steal and takes it all the way down. Followed by the beautiful Ginobili drive, and CV's three isn't falling now, and I think we've got this one. That's right, you heard me you hayseeds, I'm calling it with 5 minutes to go. Mojo be damned!

Update: Looks like that was the right call. The Spurs are first to 100 (Lawler's Law!) and -- wtf? The floor is coming up in pieces? The housie walks by just now and says laconically--"they'll get some gaff tape for that." And they do. This house is full of basketball geniuses, I tell you what.