This FanPost is inspired by my suggestion that Hill increases the pace of the game and BlaseE's encouragement to look into the numbers to see if my perception is correct. My observation was that it seems that when Hill gets the ball early the team plays a faster pace as a whole. If you have no allergic reaction to graphs or plots feel free to continue reading.

One way to verify this is to determine how many total possessions (between the two teams) per minute occur when a specific player is on and off the floor. With these numbers at hand we can take the difference between the two and get a metric that would be positive is the player increases the pace of the game and would be negative if he decreases it. The chart below summarizes these data: 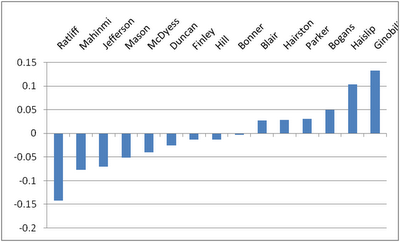 First of all when Manu is on the floor the speed of the game increases dramatically. Most of us would expect this after watching Manu play for so many years.

The most interesting observation however is the position of Jefferson on this chart. Jefferson decreases the speed of the game more than any Spur that consistently gets any minutes. This is extremely surprising given that when the Spurs acquired him most of us thought that he would provide the speed and ability to attack the rim that previous Spurs teams so often lacked. This observation can be interpreted in many ways but one possibility is that Jefferson is being asked to focus on defense and there is some evidence that the Spurs are better defensively when he is on the court.

A second observation that is surprising is the position of Bogans. There is no other Spur getting consistent playing time (other than Manu) that increases the pace of the game more. I dont know how I would interpret that but it is a telling statistic.

Coming back to the initial reason for this investigation is the position of Hill. Hill seems to have little effect on the speed of the game when he is on the court as he does not increase the pace of the team or decreases it appreciably. It seems like I was wrong in my observation that Hill increases the pace although you would not be able to tell by watching the game.

A tangent of this conversation is the projected starting lineup now that Parker will be out for a few games. BlaseE pointed at the possibility that we have a line up of Duncan, Hill, Jefferson, Mason and McDyess. It would seem that a lineup like that would play an extremely slow brand of basketball. In fact, this combination of players has been on the floor for about 7 minutes the whole season and averaged a total of 3.5 possessions/min (Our most often used lineup averages 3.82 possessions/min). They went on to score 15 points and allow only 9 in those 7 minutes.