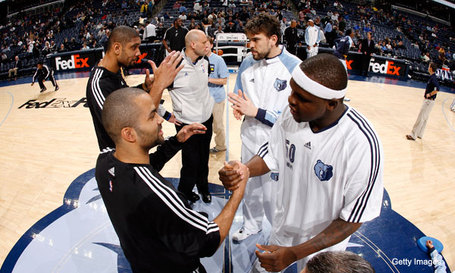 I'm still not satisfied with that win over Atlanta, and we need to get some payback against the Grizz. Also, this Memphis squad is creeping up behind the Spurs in the standings. Lots of things to worry about, people. Hack preview, after the J.

I will now shamelessly post some choice quotes from the Hawks game, see if it helps with the mojo or for whatever use it may serve.

I thought we played and executed pretty well for most of the 48 minutes for more of the game than we have lately. Tim was a monster on the boards and I thought Richard showed some good aggressiveness tonight, that’s what we have been looking for. It was a good night.

On if Antonio McDyess starting was a matchup adjustment

Not necessarily. We just like the offensive balance. He did a real fine job. He is getting more and more comfortable shooting the ball and not deferring to people. He played well around the rim tonight. He has always been a solid player; it’s just a matter of him finding a spot for himself. Hopefully that’s happening.

On the injury to Tony Parker

No one is going to replace Tony Parker. Everyone will step up and we will play hard and play to win.

(Play to win? Did I read that correctly?)

They have very athletic guys just like Chicago. Josh Smith is a great shot blocker in the middle and you have to take it to his body and be aggressive. We definitely did that tonight.

Rage Against the Overpaid

On learning the Spurs system

I just have stick with it – the opportunities are going to come. I haven’t shot the ball well the last few games but you can’t let your confidence go down since you might get frustrated or annoyed. You have to stay the course. Coach Pop does a good job of telling me to focus on other things like rebounding and defense – the offense will come. When you have been doing things for quite a few years and then get into a new system, you are going to have your ups and downs. 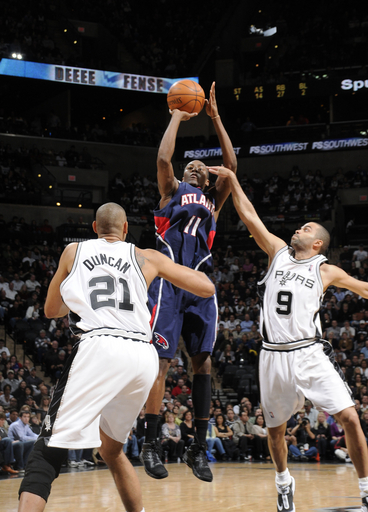 I think we did a good job on Tim at the beginning but you have to remember he’s an All-Star and a future Hall of Fame player. Tim finds ways to get his game open and make his shots. Tim attacked the rebounds tonight and got some easy put backs and shot extremely well from the free throw line. When Tim gets going early it normally carries the entire night.

Tim Duncan is one of the greatest players of all time. He’s just so smart on the court and you always have your hands full when you play against him. Tonight was a big team effort for San Antonio and they were ready to play tonight. The Spurs were very hungry for a win and you felt that vibe from the start of the game.

I got nothing, so have a lame Grizzly Bear fight!

Since the All-Star reserves (Congrats, Z-Bo! What? No no no, you're not getting a cheeseburger! You got selected as an All-Star! You still prefer the cheeseburger over it? Are you kidding me? You're... hopeless.) have been announced and the All-Star Weekend fast-approaching, here is a clip of Conan 'O Brien wreaking havoc in the 1995 All-Star game in Phoenix. This also explains the origin of David Robinson's nickname, "The Admiral." High comedy. (thanks to BDL for the original linkage)