To Spursland and Back Again: A Foreigner's Tale - Part 2

Share All sharing options for: To Spursland and Back Again: A Foreigner's Tale - Part 2

It's actually quite difficult to find time to write when you're actually having fun doing different stuff all day long. I have a new appreciation for Wayne's work during his Las Vegas trip - that was something else. I would work as hard, I really would, but I have the perfect excuse: it's my freaking vacations.

I woke up early that Sunday, with absolutely no plans. Wayne wasn't going to come till Monday, Tom my host was away, too, and the other people I knew in SA were busy with life. So I decided to focus on fixing something of the utmost importance: my computer access. As I'd mentioned in my last post, being the hopeless newbie that I am I had no idea that the North American sockets had little to do with the ones used in Argentina these days. My battery had quickly run out the day before at Madhatter's, and I couldn't imagine life without PTR and Gmail for three whole weeks - especially while in Spursland. And yes, I know I'm sick.

I started walking looking for a Walgreen's. For the foreigners, Walgreen's are mini Walmarts, small supermarkets (is that an oxymoron?) in one of which I'd bought my pre-paid cellphone. I knew there was one nearby, but I had no idea where it was exactly. Armed with my brand new San Antonio map, I wasn't going to let that stop me. Thus I set out in the general direction of the Riverwalk and the Alamo, downtown San Antonio, asking people left and right where that elusive Walgreen's was, but no one was sure. In the meantime I crossed the Riverwalk two or three times, and took some photos - this is my attempt at being artistic like Hipuks. 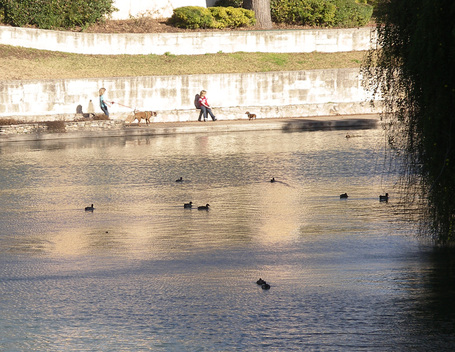 I finally found a Walgreen's (thanks to a drunk teenager, in fact), just opposite a Children's Museum that looked interesting - too bad I didn't have any little cousins to use as an excuse to visit it. It didn't have the adapter, but I was able to buy some stuff I'd forgotten: toothbrush, comb, etc. Did I mention I suck (tm) at traveling? I decided it was time to bring out the big guns, so I walked all the way to the Rivercenter Mall. As far as malls go, this one actually has an interesting design. It's shaped like an U, I believe, around the tail end of the Riverwalk, and there's a bridge connecting both wings.

Still, it's just a mall, and both malls and airports are universal constants across the world. I asked a random Hispanic guy I came across about the adapter, and he suggested a shop that was about to open. As I was waiting, 15 minutes later, he came up to me, waved, and told me to follow him. Apparently while he was buying for a cell phone he noticed the adapters on the wall and came to get me (across the entire mall) because he knew I needed it. If that's not some old fashioned Texan hospitality, I don't know what it is. Great guy.

I walked by the Alamo, but didn't go in because I'd already talked to Jane Ann (jannieannie) and we were going to go together with jollyrogerwilco and Ben, a friend of mine, the next day. You see, Jane Ann is a retired history teacher, so she can really make the old walls come alive when she's talking. But we'll get to that soon enough. In front of the Alamo you can find lots of funky shops, but I'd been warned against them. Ripley's Believe it or Not is there, and honestly it looked a bit silly from outside. What shocked me, though, was this kid's game: 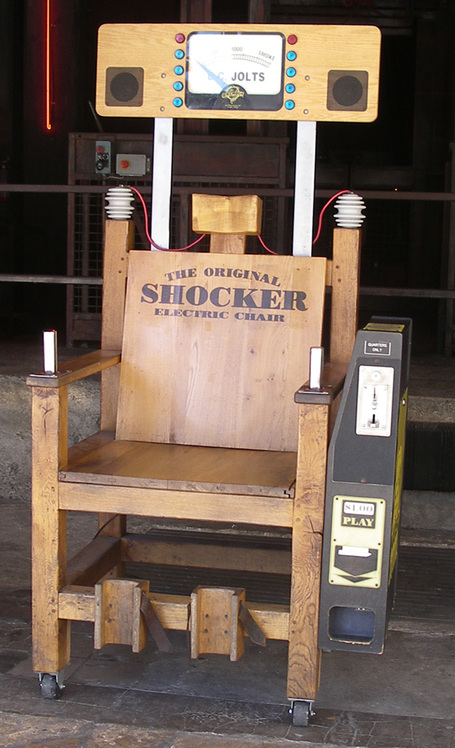 Seriously, how's that good for kids? An electric chair? Really? Even though you can't see it, the LED screen said something like "Are you brave enough? Can you withstand it?" Hell no, I can't resist electricity. I'm trying to imagine that being in an Argentinian arcade, and I just can't picture it. Maybe it's a local thing. Next to it was some sort of low quality wax museum, like Madame Tussauds' pauper son. The entrance featured three true American heroes: Superman, Bob Dylan and... Tiger Woods. So there it was, Wax Tiger, grinning at me, tirelessly waiting for the scandal to pass and his real self to don the leader's red one more. His smile was intoxicating. 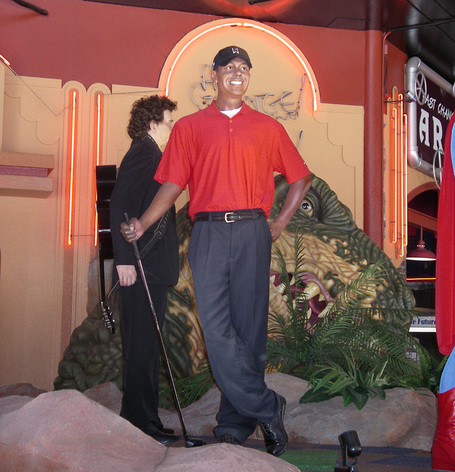 His eyes followed you everywhere

Since I was on my own, I decided to save some money and eat at McDonald's. They're another universal constant, now that I think about it. I remember my surprise and secret disgust when I spotted a McDonald's set up inside an incredible classical building in Paris, opposite the Louvre, and sporting a marble McDonald's sign. Really. In any case, the food was what I expected - I finished quickly and started walking back home, thinking of taking a nap and maybe actually doing some writing for the blog.

It was not to be. When I got to my room and plugged in my computer, I found out there was an open wi fi connection I could shamelessly steal, so I proceeded to do just that. Once logged in I spotted an e-mail by p2cat. For those of you that don't know her, she's a member of PTR, but she doesn't post much. (Wish I could post her photo, but she wouldn't let me.) She said she felt bad about me being alone in SA, and offered herself as an impromptu tour guide. I immediately accepted, so we talked on the phone and she picked me up an hour later. We drove to a parking garage downtown, left the car there, and she started leading me around the city. We went straight to the Riverwalk, which looked very nice in the twilight despite the chilly wind blowing that day. Finally she picked a bar whose name I can't recall, and invited me my first ever margarita. 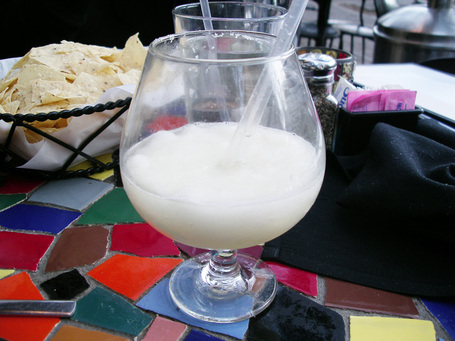 You never forget your first

Eventually, we started walking again. She showed me the gorgeous Menger hotel, said to be haunted. It has an amazing bar, completely covered in wood and with an unfathomably large moose head hanging from the wall. I took jollyrogerwilco and my friend Ben the following day so that they could see it, too, and I think they were suitably impressed. Then we walked all the way to La Villita, the original San Antonio settlement, now home of artisans and artists (and a guy who makes bonsai trees - damn, I want one of those). In the Riverwalk front of La Villita is a nice amphitheater, and p2cat told me that's where the Spurs start their river parades when they win a championship. Cool, eh? The light wasn't good at that hour, so I didn't take a picture.

Crossing Alamo street just opposite La Villita is the entrance gate for the Hemisfair Park. There's not much to do there nowadays, except from visiting the Tower of the Americas, but we still walked past it and we could see the water fountains near the tower. It was beautiful, but again I refrained from taking a photo in the middle of the night, knowing I'd have other chances. And then I walked up some stairs, and there it was: the Alamodome. I crumbled like a cookie: I had to take a picture of that. Here it is: 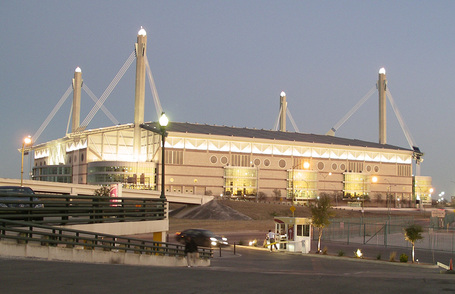 Now that's a fine looking arena, isn't it? Why did the Spurs leave again?

p2cat dropped me off at the Holyday Inn where Ben was staying, in Camaron street, not far from the Alamo. I've come to learn that Camaron street, despite being near the neuralgic center of the city, is a microcosm of its own. It's the only place in San Antonio so far where I've seen hookers and beggars, and a guy actually asked my friend Ben to give him his jacket at some point. Somehow, "I'm sure you have a better one!" wasn't a convincing argument. It was rather late by the time I met him, so we decided to just grab a bite somewhere.

MiTierra had been suggested by many people, over and over again. It's in Market square, and it seems to be _the_ traditional Mexican restaurant. As soon as you enter your senses are assaulted by its sheer "Mexicanity" - the place was so Mexican I was expecting to see the Chapulín Colorado having some tacos in the counter. It was full of lights and what seemed like Christmas decorations, which gave it an odd atmosphere that I liked, and it was brightly lit and colorful. Despite my limited understanding of what good Mexican food entails, the cheese enchiladas I had were tasty enough. In fact, I'd say this was a completely positive experience if it weren't for the 4 burly mariachis walking around the tables, randomly plucking their guitars. Every 20 minutes they'd launch into song, and I had to sit through some of the most boring classics in Mexican music. They even sang "La Bamba", for FSM's sake!

Since I don't have any photos of MiTierra, here's one of a humongous tree Ben and I found somewhere in the Riverwalk. Ain't it something? 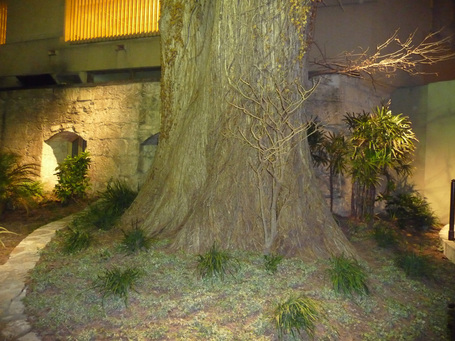 Doesn't do it justice

I'll try to write about our get-together tomorrow - I'm waiting for jolly's photos so I can spice it up some. So look forward to that, I guess.