To Spursland and Back Again: A Foreigner's Tale

Share All sharing options for: To Spursland and Back Again: A Foreigner's Tale

Hey there, you crazies. It seems my trip came just in time to help me dodge a major breakdown in the Spurs community (and witness first hand a major breakdown in Spurs basketball). One of the first things Wayne told me when we met was "Horrible game last night." But somehow, it didn't bother me as much as it would've if I weren't on vacations, in San Antonio, and at the time only 24 hours away from my first live NBA game.

I thought I'd share some of my no-dventures so that other foreigners like me can live vicariously through me. Or something.

Because of some unwelcome flight rescheduling, I had to leave Buenos Aires midway through a bachelor party I had organized. You can't imagine how frustrating it was when midway through my check-in I received text messages from my friends telling me what a grand ol' time they were having without me.

Thus, one of my last memories of Buenos Aires was seeing a good friend of mine dressed in nothing but animal-print shorts and wearing more makeup than a transvestite. 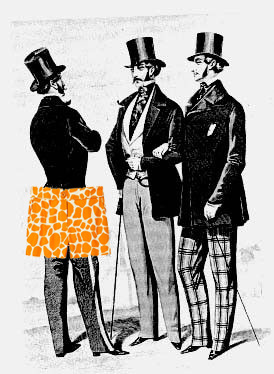 Visual approximation of the bachelor party

After the check-in I went through the security points, had to fill some forms, waited for half an hour and then I finally got into the plane that was going to take me all the way to... Panama. You see, having such a tight budget meant cutting corners wherever possible, so I'd gotten the cheapest flight available. That went through Panama, all the way to Houston and then from there to San Antonio. 17 hours of joy at 40000 feet.

Thankfully my college years had allowed me to hone my sleep-anywhere-anytime skills, and I managed to blink away just about 11 hours of those 17. The rest was spent reading Moro's Utopia, (or using it as a means to fall asleep quickly again, rather) chatting with the German/Paraguayans hybrids sitting next to me, eating my first ever roast beef sandwich and getting my mouth burnt badly because of it, and getting through the American Iron Wall.

Boy is it hard to get into the US.

After many days and many dollars spent getting my tourist visa in Argentina, I still had to fill out lots of papers and forms to be allowed into the country, went through about 4 security checkpoints, and had to deal with a charming interview with an officer of the law that involved questions like "Why did you get your visa in 2009?" Because it's January 2010? I was finally let through after I answered the "What do you do for a living?" question with a cocky "Civil engineer.", which proves once again that we civil engineers are international badasses that can't be stopped by immigration laws.

You know what's really, really dangerous, though? Not your bags, or the stuff you might have strapped to your body, no. It's your shoes. Those leather shoes you walk on every day and barely pay attention to. They were x-rayed, prodded once, x-rayed, looked at from different angles, prodded again and finally returned to me. I think I hesitated before putting them back on. 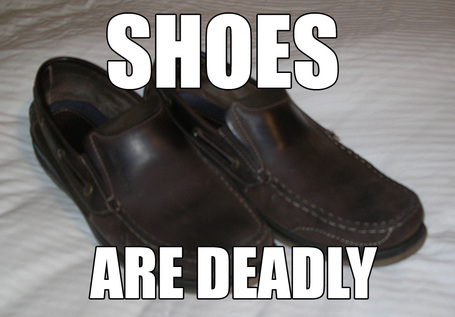 I was going to mention something about carbon knives with diamond cutting edges, but I guess I don't want to sound both pretentious and potentially dangerous.

Fittingly enough, the first distinctly American feature I saw through the tiny airplane window was a baseball court. Maybe it's a sign that our cultural barriers are getting thinner and thinner every day, and it's more difficult to find things to differentiate us.

Or maybe I just have sports in my brain.

I finally got to San Antonio, and picked my luggage still intact (a real worry after so many comings and goings), so I started looking around trying to spot Wayne. I didn't see any angry bald guys, but sometimes avatars can be deceivings, so I kept looking with hope in my eyes at all the people with buzz cuts I came across. Since that wasn't working, I decided to step outside and try to see if Wayne passed by on his SUV. 5 minutes laters, I was still waiting.

At that point I started wondering what I was going to do if Wayne didn't show up. My options were alarmingly few considering that I had to get online to find Wayne's phone and that I didn't know where I could find a wi fi connection, I hadn't booked a hotel, I didn't know the name or the address of the guy at whose house I was going to stay in, and I didn't even have a cell phone. I guess I could've just taken a taxi to some random hotel, but what if Wayne came after I left?

Thankfully Wayne showed up two minutes later, running over from the other terminal with a big smile on his face that shocked me to the core. Wayne actually looked... amiable. Approachable. So there you have it, guys: despite that scary avatar, your fearless leader is actually a big pussy cat.

Anyway, he got me to where I'm staying now, a little guest house with a microwave, a bathroom and a comfortable bedroom. And best of all, a wonderful, huge bed that I know I will be missing when I get back on the road. I'm not sure if the owner wants to have a picture of it online, so I'll have to ask him before putting it up. In any case, I'm living in style.

Can I Have Some Tea Instead?

We went to The Cove next, for dinner. (A note: In Argentina "dinner" means going to a restaurant at about 9 PM, sometimes later, then talking for half an hour or more as you wait for your meal, and then spend an hour and a half eating and chatting. It was 6 PM when we got to The Cove. That's just not right.) Apparently Texas is in love with Mexican food (or maybe that's the US in general?) because everywhere I look I find Mexican restaurants. Me, I'd never had Mexican food in my life, since it almost doesn't exist in Argentina, so I settled for a hamburger. Wayne and Mrs. ATS bought some fish tacos and something else I can't recall right now, but I'm sure was uber-Mexican. We stayed outdoors, because... wait, I need to describe The Cove first. 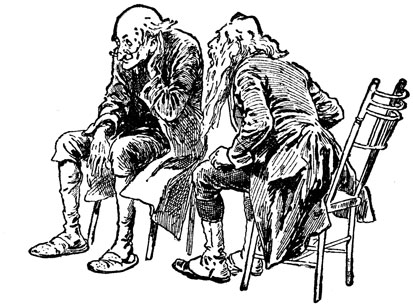 Visual approximation or Wayne and me listening to the kids rap

Apparently, the Cove is the favorite local teen hangout, or one of them. It's a wild mix of car wash, bar, restaurant and laundry, and there are live music shows that feature bands of kids not old enough to shave. The kids had taken over the tables inside the bar area, so we had to stay outside in a place that is probably great in Summertime, but was pretty cold on Saturday. Once the heater was turned on, we were fine, so we decided to watch the teens have fun (because that's what us old farts do). One of them was beatboxing, and a girl and a boy were rapping along, and kept inviting people to join in. It looked like a lot of fun, actually. If you could rap.

Oh, and I think Wayne got hit on by the hot mature barlady, but don't tell Mrs. ATS.

After some trips to Walgreen's so buy some stuff and having an incredibly difficult time getting my brand new pre-paid phone to work (we're dumb), they went back to Austin, and I unpacked. I was about to call it a day when I decided it was way too early, especially since I had a brand new map that would hopefully keep me from getting lost in the middle of San Antonio during the night. 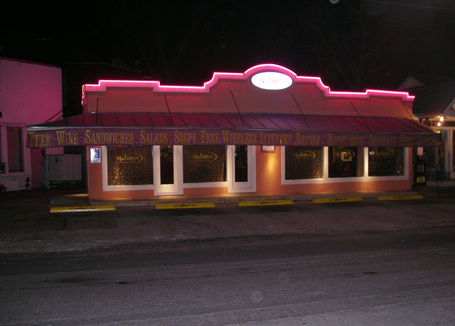 My first stop was a cafe Wayne had mentioned called MadHatter's - I needed to check my e-mails and write a short note to my folks (and maybe, just maybe check PTR, because I'm sick in the head), and apparently this was the closest place with wi fi. It was actually rather trendy looking, and rather full considering it was nearly 8:30 PM (fellow Argentines, that's like 1 AM for them), but I managed to spot a table with a plug nearby.

I asked for a coffee, expecting a little ceramic cup with expresso coffee. Instead, the guy told me to go to a corner of the cafe that had automatic serving machines and get some myself. Okay, that's fun, I thought. Except that the cup was plastic, it was like 30 cm tall, and the coffee was filtered and not good at all. I suspect I wasn't supposed to fill the entire cup, anyway, because when I tried to put sugar in it I discovered that they had very small packets with only a little sugar in each. After opening over 12 of them I started thinking I was _doing it wrong_.

And then I realized that my computer's plug didn't match the local type of socket. Yep, I was definitely doing it wrong.

I gave up for the night and started walking around. It's particularly interesting how many signs and names are written in Castillian in San Antonio, although some have so be jokes of some sort. I spotted a restaurant called "Oloroso", which is Castillian for "smelly" or "stinky". The city also seems to love neon signs, at least downtown, even in cases when it doesn't seem like a very appropriate choice. For instance, I found a dentist who has a colorful "dentista" sign in his front door. I can't help but wonder how that's working for him. 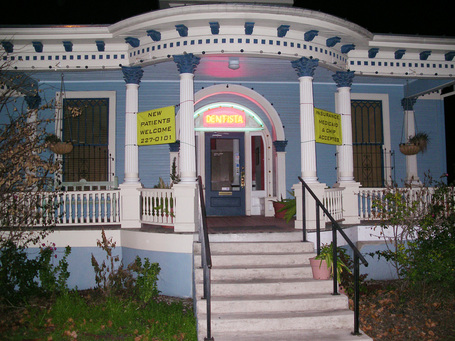 The kind of person you want looking inside your mouth

I turned at random, trying to slowly get back to my new place, and suddenly started notice that all the houses were rather impressive and looked old. For a second there I thought that this was the norm in San Antonio (you know, it being part of that mythical "First World" and all that), but then I noticed the signs explaining the history of each house. This one was my favorite: 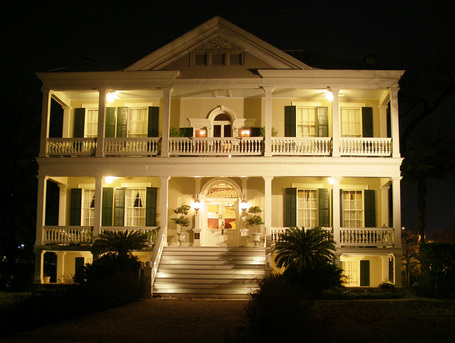 If I was an architect, I could tell you the house has a neo-classical style. If I was a historian I might know it was built by German settlers midway through the 19th century. Being a dumb engineer, all I can tell you is that it was made of wood and it was very nice-looking. Oh, and that a bulldozer could probably pull it down in about 10 minutes. AWESOME.

(Later I found out that I'm staying in the edge of the King Williams district, famous for its classical houses. So that explains that.)

And then I took another turn, walked down a couple of blocks, and there it was: the Riverwalk. It was the very edge of it, and it was so dark that I couldn't see much, but it was still a welcome sight. My photo doesn't do it justice - I wish jolly had been with me. 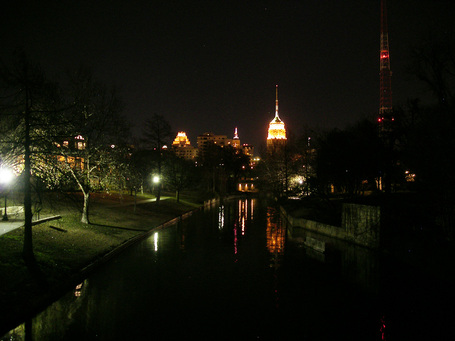 Dallas doesn't have that

Anyway, that's it for tonight, I'm tired and we just lost to the fucking Bulls, as either Wayne or Queness said a couple of hours ago. I'll try to cover days 2 and 3 tomorrow, because I know you all want to know what losing your first live game ever feels like. Should be gut-wrenchingly fun.