Proud Texas Citizens. Kinky Friedman, on the left could have been our Governor. You gotta love a guy who's campaign slogans are "How Hard Could It Be?" and "Why The Hell Not?" The legend on the right is Willie Nelson, who once smoked pot on the White House roof. Texas Proud, Baby! 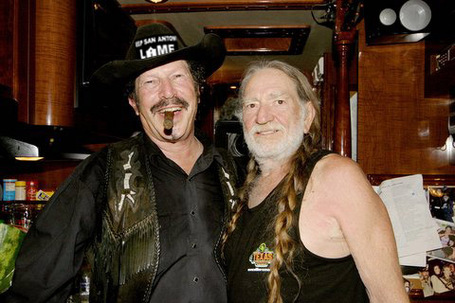 So, In honor of LD's upcoming epic journey, I promised myself I'd write a few words about my hometown. What? He's already in town? Bummer. So, OK, I guess I'll post this anyway. For the rest of you peeps. Here's the short and not so sweet lowdown on San Antonio. It's the 7th largest city in the nation. It's boring. It's hot. There's nothing to do here. So that's pretty much it. David, I'm so sorry you have to spend a week in this city. I've lived here a long time, but I'm thoroughly medicated so it doesn't really affect me anymore.

(Just want to give credit where it's due... here's the Keep San Antonio Lame myspace page and facebook page.) Learn it. Live it.

Thanks for coming, please tip your waitress on the way out.. More after the jump if your masochistic self is up to it.

Did the part time viewers leave? Is it just us? Good. Because now I'll give you the real insiders view of San Antonio. But keep it to yourself, because I'm doing my damndest to move SA back to #10 on the population list. It's not gonna be easy. I understand people are migrating to this state at an average of 1000 people per day. (And I don't even want to think about the percentage of Laker fans in that number).

Damn it Lyle, you're not helping me out here!

Alright, first and foremost, I absolutely love my town. Love. It. It's quirky, there's a nice cultural mix and most folks are very friendly. As a matter of fact, it has the feel of the ultimate small town. If you placed 10 random San Antonians in a room together, by the end of the night those folks will have discovered some common connection. OMG, I went to school with your cousins sister. Or your neighbor is my dentist. Wow, didn't we once sit next to each other at a Santana concert? And so on and so forth. This kind of thing happens all the time. All the time. Trust me someone on Monday night will say, "You look familiar". Seriously.

Let's move on to the name, it's San Antonio. San Anto is also sometimes acceptable if you're a local and in the know. Never, ever is it permissable to use San Antone. Unless your name is Bob Wills or Patsy Cline or you're singing San Antonio Rose. That's it. The only exception. So, don't do it. That's right... I'm looking at you, Marv Albert. 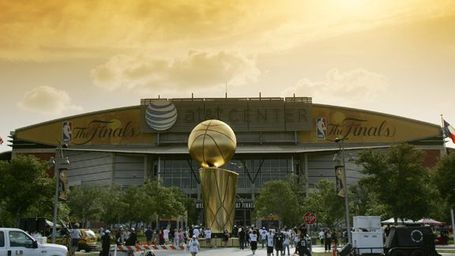 Right about now you're probably wondering about the title of this post. I borrowed it. And it totally epitomizes the perception of the city. Those that get it embrace it, those that don't... well, they embrace it, too. In the words of the creator of the Keep San Antonio lame movement, "A movement which requires no effort. We are lame and we love it... or leave it. Remember: Lameness, like all else, is just an illusion. Be the Lameness". Like I said, we're quirky.

Here are a few facts to get out of the way or if you want more in depth info, you can head over to the Official City Website or the City Wiki page. People (that would be the Native Americans) have gathered around this area for about 12,000 years. For the most part, the Native Americans lived at the San Antonio Springs, which they called Yanaguana which means "refreshing waters". San Pedro Park (home of the Springs) is the second oldest municipal park in the nation. The oldest? That would be a lovely park called the Boston Commons.

Huh... would you look at that? Where are the Native Americans?

San Antonio wasn't officially named until 1691. It was the feast day of Saint Anthony of Italy, so Spanish explorers and missionaries named the city in his honor. Actually, there are some reports that another Spanish Explorer, Alvar Nunez Cabeza de Vaca visited and documented the city by the river in 1536.

There are four major industries that support the economy in SA. Financial Services, Government, Health Care with a strong Bio-Medical Industry and Tourism. For your information, the number one tourist destination in Texas is the San Antonio Riverwalk followed very closely by the number two destination, the historic Alamo.

The San Antonio Riverwalk was in danger of becoming a paved over sewer system after the great flood of 1921 killed over 50 people in the downtown area. Instead, an architect / conservationist by the name of Robert Hugman convinced city leaders that flood gates could regulate the flow of water. With monies from the Roosevelt New Deal WPA program, Mr. Hugman's dream become a reality. And may I say thank you, thank you, thank you Mr. Hugman! The Riverwalk is now home to dozens of Hotels, Bars, Restaurants, Nightclubs and Shops. However, my favorite parts of the River are those that are not commercially developed. I like walking by the cypress trees and especially enjoy the new museum reach extension of the Riverwalk. 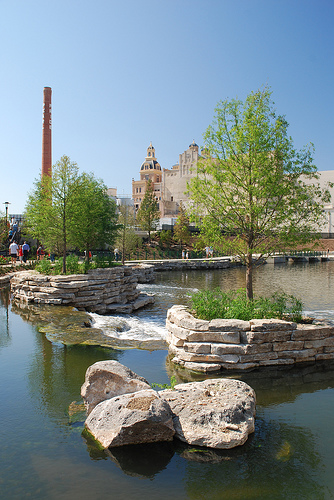 Just one little thing about the Riverwalk, we drain it during the first week of January. Yeah, you heard that right and no, you don't want to know about all the items that have been found in that river. So don't come during that time period, unless you want to be disappointed. However, we even turn that into a party and we crown a Mud King and Queen. Once again, we bring the quirky.

My favorite use for the Riverwalk, a championship parade! 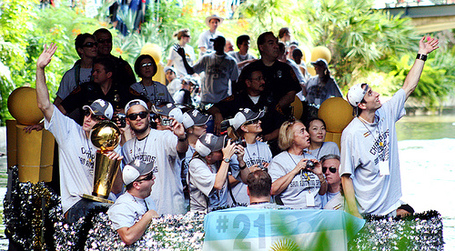 Enough about the riverwalk, let's talk about The Alamo. Approximately 250 Texians (the numbers are still in question) held off approximately 2400 Mexican soldiers for 12 days. All the Texians (some of which were of Mexican descent) died, although they were able to kill 400 - 600 before perishing. The battle of the Alamo, instead of quelling resistance helped Sam Houston and increased the number of soldiers willing to fight for their freedom and the future Republic of Texas. The final battle over Texas took place a little over a month later at San Jacinto, where the rallying cry was "Remember the Alamo." Supposedly that battle lasted less than 20 minutes and Texas was on it's way to being a Republic. That's the basic story, but I'm sure this guy (Phil Collins) could defintely tell you more. Wait... what? He's British? That's weird.

So let's move on to some of my other favorite things in the city. Icehouses. Yep, a place to congregate, watch a game and have a cocktail or a long neck. Whichever. One of my faves, is La Tuna. I don't know about you, but I'm willing to flirt with the danger of contracting tetnus in the name of a good time. Aren't you?

The ground covering for La Tuna... pretty, isn't it? 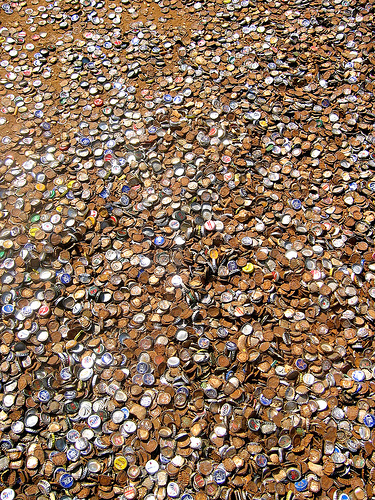 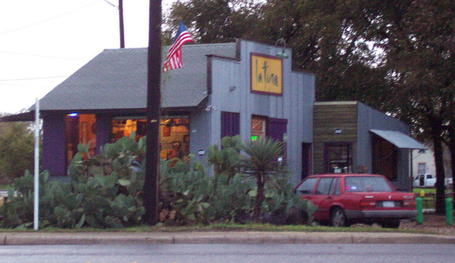 Next up? Good eats. Where to begin and where to end? The list is endless, but I guess we begin with Rosario's. Site of the first PtR get together and our meeting place on Monday night. Their sister restaurant on the Riverwalk, Acenar is also a winner. And we can't forget about the leaning building that is the Liberty Bar. If figs are in season, order the appetizer... it's delish. True story, I once saw Tommy Lee Jones drive up in a smart car to enjoy lunch at Liberty Bar. I'm glad he's environmentally conscious, but that was just strange. By the way, he's a Spurs fan. 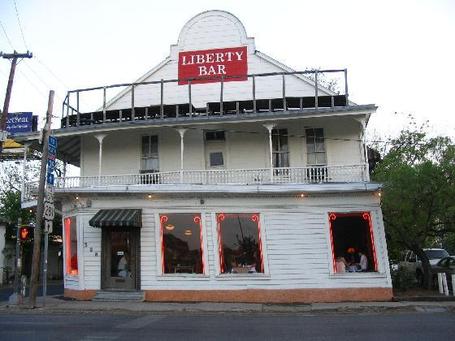 I understand Mr. Parker loves Bistro Vatel and Damien Watel does the French thing right. He also has a number of other lovely culinary options for your eating pleasure.

If you're out after a long night, then I'd recommend Mi Tierra where every day is like Christmas. This is an SA institution. Chris Madrid's and Timbo's for Burgers. Il Sogno Ristorante which is owned by Andrew Weisman, one of the best chef's in the state. Shaq's favorite dining option, Lulu's which features a 3 pound cinnamon roll. Yes, 3 pounds. O.K. enough with the food. I'm sure some of my SA peeps will be sure to add all their favorites that I wasn't able to mention.

Museums/Places if Interest: In San Antonio, we don't tear things down. The people of this city have long had a strong conservation streak and you can see it all around. Especially in the downtown area. Without these citizens of great vision, we would have lost the Alamo, the Riverwalk, the Majestic Theatre, the Empire Theatre, La Mansion del Rio Hotel, the Spanish Governor's Palace just to name a few. While other Texas cities were tearing down their older buildings to replace with the shiny and new, San Antonio was preserving and nurturing.

The Institute of Texan Cultures, I love this place... it features all the cultures that helped make Texas unique.

San Antonio Museum of Art, it's a wonderful Museum and it's also part of the new Riverwalk expansion.

The Spanish Governor's Palace the National Geographic Society has labeled this the most beautiful building in San Antonio.

The Majestic Theatre this was built in 1929 and we're lucky to have it.

Were people dropping acid on a regular basis in 1929? Just asking. And another thing... where do you get a white peacock? 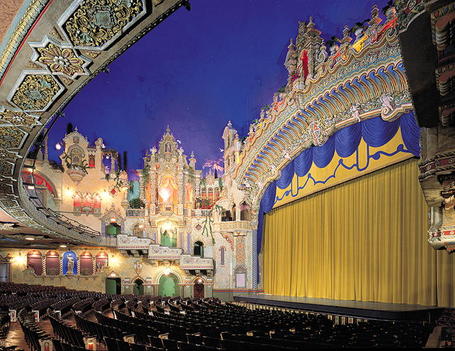 Blue Star Arts Complex In the heart of the city. In South Town or the King William area, whichever you prefer. Love first Friday... especially since they're refocusing on the Art/Artists instead of the drunkenness.

The King William Historic Neighborhood One of the loveliest neighborhoods in town with so much character.

Brackenridge Park where San Antonians can congregate and picnic. The San Antonio River runs right thru the center of the park and it's next to the SA Zoo. Also the lovely Japanese Tea Gardens are located within the park.

San Antonio Botanical Gardens Wonderful Jazz concerts and Shakespeare plays in the Spring and just an all around gorgeous site. 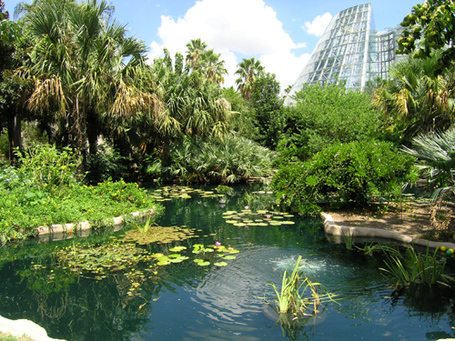 The Gunter Hotel Home of the famous Robert Johnson recordings. Wow, did that floor you? That's right... the Robert Johnson arguably the greatest Blues man of all time.

Wow, one album and countless musicians and singers felt his power. A-mazing. 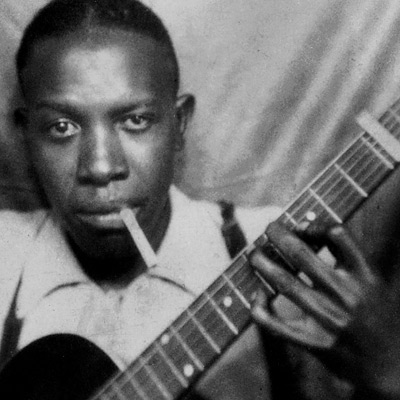 Although I'm truly just scratching the surface of the San Antonio experience, I can't leave you without mentioning the wonderful Missions and the San Fernando Cathedral.

Besides the Alamo, there are four Missions and I believe all of them are still active Catholic parishes. They include Mission San Jose, which is probably my favorite. It's especially nice to attend the Mariachi Mass at that location. Also, Mission Concepcion, Mission San Juan and Mission Espada which is right next to the Espada Dam and the Aqueducts.

Mission San Jose... to bad I couldn't find a Wedding photo. Those are fun. 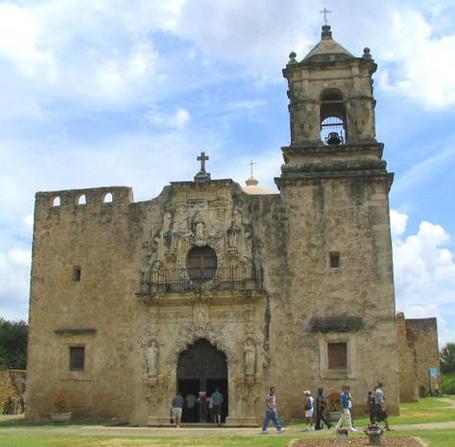 The famous Rose Window, supposedly created by a Stonemason to honor his dead fiance', Rosa. 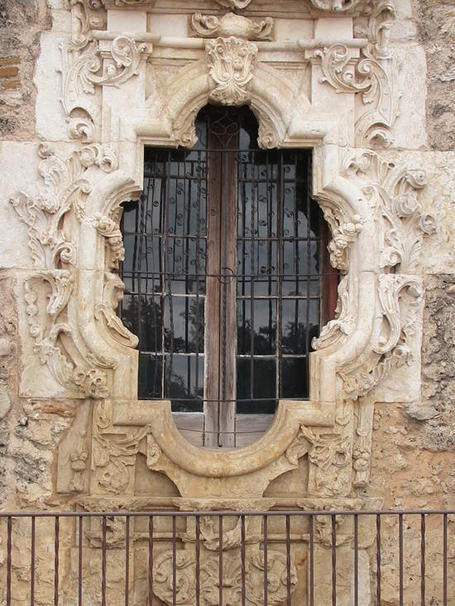 Finally, the San Fernando Cathedral. It's beautiful and you can participate in a Mariachi Mass or a Spanish mass. Supposedly the Ashes of the Alamo Defenders were laid to rest in the cathedral, but in all honesty they were probably buried on the Alamo grounds.

This is the heart of San Antonio. 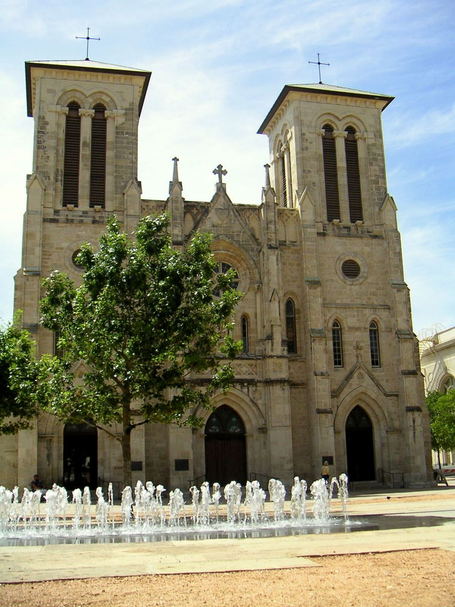 Oh, shoot... did I get the heart of San Antonio all mixed up again? Hmmm? 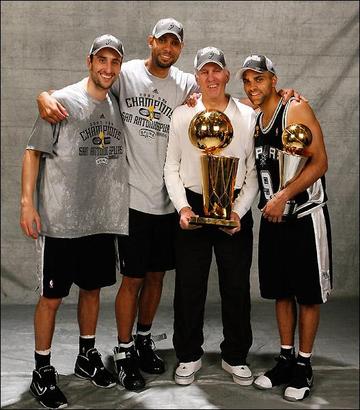