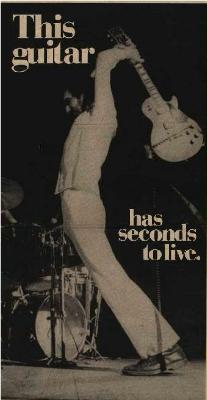 We've lost three straight this season to the Jazz, now down to one chance to salvage the series. I say we stop fooling around and show them who's the boss.

A pathetic attempt to pump you up, after the jump.

To use a very, very abused cliche, the Jazz just know how to play the right kind of music when going against us, at least this season. We've been 3QC'd, abused in the paint and pushed around like little kids thrown inside a mosh pit of crazy teenagers on crack.

Like most of you normal human beings, I like music a lot but I'm not that knowledgeable about the intricacies and the history of music or whatever that is that junkies like to throw around to tell people how smart they are when it comes to their tunes. I'm just an ordinary dude who listens to stuff that I like and also enjoys the music that I find here in PtR, like the ones that Tim C., jrw, LD, Wayne and bellasa share in TWSS posts or game threads.

So what's my point? Nothing really... just wanted to make a stupid intro to probably THE GREATEST FREAKING BAND ON THE PLANET DEL POTROOOOO!

But first, here's a song to get you sorta riled up. Skip to about two minutes and a half if you don't want the video's introductory humor.

That's really not the name of the band, but wouldn't it be cool if they were introduced as "Ladies and gents, here are your servants of suckitude!" No, it's not your favorite band, and it's not Argentine, either. Okay, a little. I thought maybe it's high time for a little CADTWNHMS to get the mojo working. I wanted to form my own little band using the Spurs players, and I chose four. Well, okay, I was too lazy so I just made 'chops for four people. Here goes nothingness...

Banging Away At Drums... 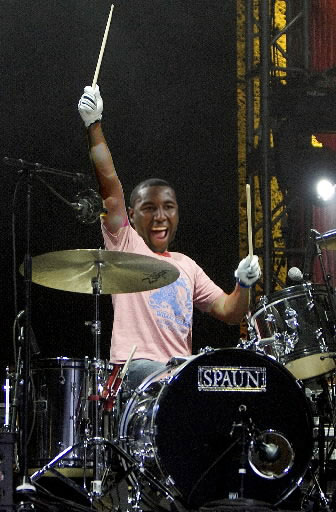 I could've made a case for Manu Ginobili behind the drumkit, too, but eventually I had to go with the Blairness Monster. First and foremost, witnesses have said that Blair makes a unique smacking sound whenever he grabs rebounds, which seems fitting to play an instrument that supposedly makes more noise than music when you hear it. But Blair continuously pounding the glass is a thing of beauty, and he makes great music with it.

Another thing is for his size, you'd expect him to be slow and plodding, but he's the exact opposite - just a ball of energy out there going after every missed shot and slipping and sliding through cracks in the paint to catch those drop passes. I look at drummers and their craft is one of controlled chaos. Hit, hit, bang your head, hit some more and probably go deaf.

Relentless and yet still staying within himself, not trying to steal anyone's thunder, staying behind the scenes waiting for that solo to come and when it does, he kills it. He just kills it. And then once again, he fades slowly in the background doing his thing. This time, however, you can't get him out of your mind. His instrument is hard to drown. He's now in your head. Can you escape the Beast?

I like him as some sort of Dave Grohl. Dave bid his time playing drums for Nirvana, staying behind the limelight while Kurt Cobain drugged away his genius into oblivion. Grohl then emerges as a multi-dimensional artist and eventually gets to front his own band, but with mixed results. Blair, at some point, will probably become the Spurs' frontcourt leader, but for now he's enjoying his time playing support crew to the GPFOAT.

Nobody Notices The Bass Man 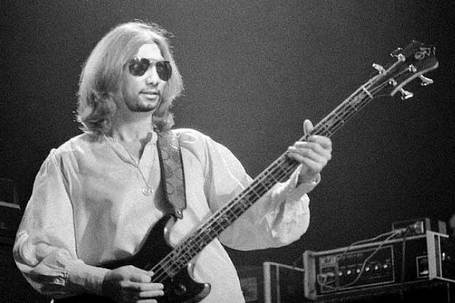 There are some famous bass players, but admit it - you hardly ever notice them. Not that we don't ever notice Tim. We in fact love him as much as Manu, but we don't go all out singing his praises like fangirls. With Duncan, there's always some sort of quiet reverence, as if his self-demands for humility and simplicity are so convincing that it trickles down to Spurs fans.

Now that he is in the twilight of his career, Timmeh continues to provide that steady support you'd want from a band member - never ever craving for that 3-minute band solo or SportsCenter highlight, just hovering around making sure everyone's on the same page. If somebody loses his way, he's the guide that leads them back to playing the right notes. To say he's cool, calm and collected is probably an understatement. He is Peace personified. (although the last Hornets game might tell us otherwise)

Led Zeppelin is one of the greatest bands ever, and John Paul Jones is probably its most underappreciated member, similar to how fans underrate Tim's importance and impact to the game when placed beside fellow superstars. Led Zep's complex arrangements seem simple when JPJ's on tap, like how Duncan makes the game look so easy with his moves, and how he also makes things easier for his teammates. 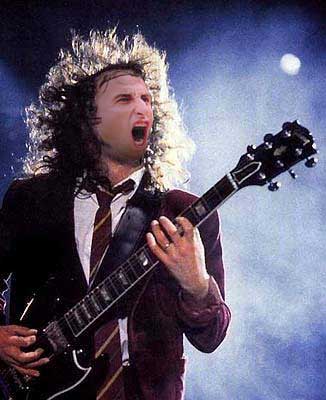 There are many other Spurs players who can fill the role of lead guitarist, but Manu trumps them all. He's not really the leader of this pack, but nevertheless fans shower him with so much love as if he was a god. Really, sometimes it's not even fair to the other band members. I thought this was a team thing?

His riffs are the type that elicit oohs and aahs from the crowd, reflecting the play of one Ginobili that, as Peter Vecsey described, you needn't necessarily see score to be dazzled. Like sometimes, you don't want someone singing but just need to listen to the guitar man do his thing and cast you under a spell. There are nights when he plays like he's drunk and all over the place, but when he gets it together, even just for a night --- how else can I describe it? Magic.

Russell Hammond and all the bands who had the lead guitarist as their most prominent icon. Yep, Russell's not really a real dude, but he represents all that is sometimes unjust in the world of music. But for the Hammonds and Ginobilis of the world, life is good.

A Passion For That Euro Flair 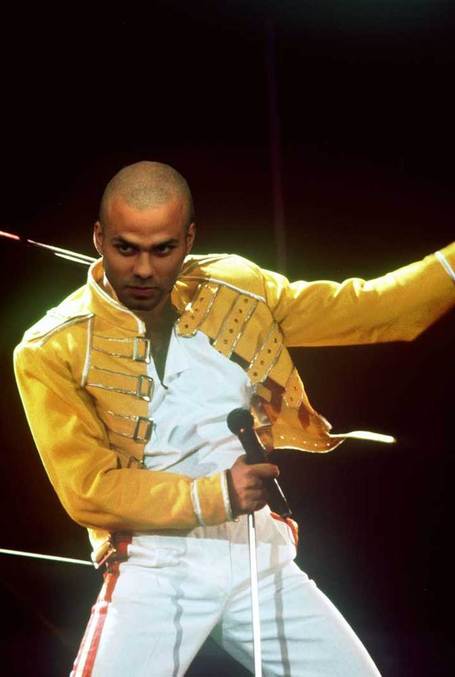 Totally not gay. (not that there's anything wrong with that)

Hardly do you ever see a band that has a vocalist that doesn't like the limelight. Though Pop and the San Antonio Spurs front office often preach humility and have an unwritten rule outlawing showboating, Tony Parker seems built to play a flashy game, and at times gets away with it.

The frontman feels like it's his stage, his band, and that he has the responsibility of controlling the unpredictable ebb and flow of the night. As a point guard, Tony holds the ball as much as, perhaps even more than Tim and Manu do. If he wanted to, he can go for 40 points and there are times when he feels he's obligated to outperform all challengers (think JJ Barea in last year's playoffs). These are probably products of a mind trained to become the man - three rings, a Finals MVP, a hotter than hell wife - who needs the team concept anyway?

And yet even as he is struggling this season, Tony has showed us his willingness to hold back. The injury definitely has something to do with it, but there are glimpses of a frontman willing to cede the spotlight in nights when his voice doesn't seem to be completely there - realizing that passing the rock for a score carries as much importance as putting it in the hole yourself.

Pretty obvious that I 'chopped Tony on Freddie Mercury's body there. The British rocker was all sorts of flamboyant, which can capture some of the essence of Tony's game (and also that of Manu's as well). He's not yet the leader of this merry Spurs band, but there are signs that point to the young guard eventually inheriting the reigns. When that time comes, I hope he'll lead this team to even greater heights.

So there you have it. Sorry if I butchered some of your favorite music legends. I haven't decided on the others, so maybe you can play a little band roulette on the comments discussion below.

Also, what songs will this Spurs band be playing? Hmm... should be an interesting playlist, if any of you are able to come up with one. Care to name the band, too? I suck at names.