Spurs Beat Lakers: Cup Half Full and Cup Half Empty

Share All sharing options for: Spurs Beat Lakers: Cup Half Full and Cup Half Empty

Not only did the Spurs get a win over a team above .500, they beat the best team in the league 105-85. Of course, they beat that team with only half of their best two players.

There are a lot of ways to slice this game up. If we had hit a decent number of our free throws, say going 8-11 instead of 4-11, we would have had 4 more points. If they had missed a normal amount of their free throws, say going 11-16 instead of 15-16 (Artest and Odom combined to go 12-12 and are both barely over 60% shooters), they would have scored 4 less points. That would make it a 28 point game. It means we would have been up 20 at the end of 3. It means they never would have gotten closer to 14. It means the fourth quarter never would have been played by starters.

How...ever. It didn't happen that way. Instead, we had to grind one out against a Lakers team without Kobe and Gasol. Big whoop. Bynum played just over 42 mintues and Odom played almost 40. Kobester logged 32:18 through 3 quarters, but didn't even take a shot in the 4th. Just a strange game all the way around. Hipuks sums it up here for us: 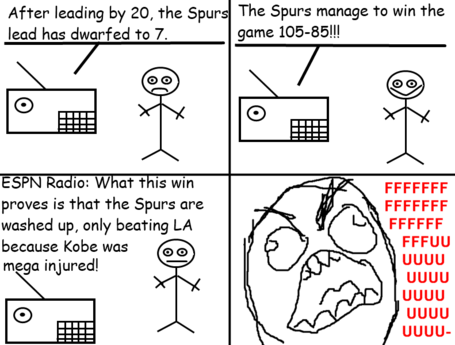 On the good side, we shot 57.3% against the best defense in the league. On the bad side, um, screw it. There is no bad side on this one. We played a pretty solid game. The margin is somewhat misleading since we hit a couple late 3's, but we didn't lose a quarter for the whole game. Our worst quarter was tying 22-22 in the third.

On top of that, HoopData shows us playing a really solid defensive game. It's only one game. But, it is a nice win. Time to leave it behind us and hit the road. See you guys tomorrow for the Thunder game.