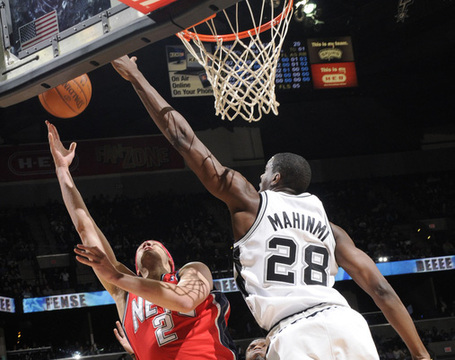 Hey look, a unicorn an athletic 7-footer in a Spurs uniform!

Yeah, I know... very punny. I'm trying to be as clever as the dialogue in Avatar.

So, the Spurs won a game tonight. But the bigger news was that the team got very solid contributions from a guy who hasn't played a game for them in 2 seasons. That's right, Ian Mahinmi played tonight, for the first time all year. Not only that, he played meaningful minutes when the outcome of the game was still in doubt. More surprising than his minutes, however, was that he actually looked like he belonged for the most part. In fact, Bill Land didn't even realize Ian was playing until he had already been in the game for almost a minute.

Let's be realistic here: Pop was most likely showcasing Ian to his counterpart, Kiki Vandeweghe, who has a trade exception to burn after sending Eduardo Najera to Dallas in a trade yesterday. So, we shouldn't think that Ian's playing time today was an indicator of things to come for the Spurs' rotation. But it was really nice to see him get a chance to prove himself again.

So, how did it go? Join us after the jump to find out.

The Spurs came out of the starting blocks with very little energy. New Jersey had quite a bit more energy, and got a few good looks at the basket early to build a 12-7 lead less than halfway through the first quarter. At that point, only Richard Jefferson, Tony Parker, and DeJuan Blair had even attempted a shot. Then, Manu Ginobili came into the game, and things started to turn around. The Spurs started moving the ball to get good shots for Tim Duncan. After Timmy got a couple of shots to fall, Pop benched him in favor of Mahinmi, and a funny thing happened: he did well. Ian did a great job of fitting in to the offense, and even made an impact with his size on the defensive end, and the Spurs finished the quarter down by 2.

To start the second quarter, Courtney Lee got into the lane and attempted a shot over Mahinmi. Yawn wasn't having it, as he blocked the shot, leading to a fast break. On the break, Jefferson found him for a monstrous dunk that nearly brought the backboard down. Two possessions later, he was fouled and made both free throws(no wonder the Spurs want to trade him). Yawn was pulled about a minute after that, when he picked up his third foul, only one of which was legitimate. Meanwhile, Manu was scoring almost at will on New Jersey, even if he made some questionable decisions with his passing. By halftime, the Spurs were up by 2, but still couldn't seem to get stops.

After the half, the Spurs came out flat again, allow New Jersey to open the 3rd quarter on a 5-0 run. That's when Tony Parker woke up. Tony scored all of his 8 points in the third, and the Spurs captured the lead on his second bucket, then never gave it back. The Spurs built the lead to double digits, and Mahinmi replaced Duncan again with less than 3 minutes left in the quarter. Yawn made another bucket, but it was Manu who really got the crowd going when he threw down a vicious dunk in traffic with 35 seconds left. This left the Spurs up by 12 at the end of the 3rd.

In the 4th, Mahinmi got even more burn, playing the full 12 minutes. The Spurs simply played to keep preserve the win over the final 12. Roger Mason and George Hill played well, while Mahinmi hit a mid-range jumper(gasp) and another dunk and layup to complete his scoring for the night. With 2 minutes left, an interesting lineup made its way onto the floor, when DeJuan Blair(PF), Mahinmi(C) and Marcus Haislip(SF) were all in the game at once, giving 3 of the Spurs' young big men some more burn.

Rebounding: The Spurs won the battle of the boards 39-28

Assists: The Spurs had 24 assists on 36 field goals, so the ball movement was good, but not great. They'll need to do better against LA on Tuesday.

Haislip looked awkward playing the 3, but that might change with a bit more experience.