A Quick Statistical Update on the Spurs

Share All sharing options for: A Quick Statistical Update on the Spurs

Some of you may remember a statistics-based post on where the Spurs stood on offense and defense a little less than a week ago. Well, with the latest winning streak, there's been some changes.

So, if you'll remember, I put more stock in efficiency ratings than actual points scored or given up. This is because teams play at different paces - for example, 2 of the Spurs 4 wins this past week were against the Heat, who played at a slower pace(91.2 possessions/game), and the Timberwolves, who play at a faster pace(96.1). With that in mind, there's going to be a lot of variance in how many points you score or give up, depending on the pace you play with.

For efficiency per 100 possessions, we're going to look at basketball-reference.com. I've included images, since there's no way to hyperlink to pre-sorted stats for the three categories we're looking at. We're also going to look at John Hollinger's team ratings, which take a few other factors into account, as a second opinion.

First, let's talk about the offense. When we last checked, the Spur's offense was 5th in the league. That's pretty good for such a "boring", "washed-up" team. But after the wins, where do we stand? 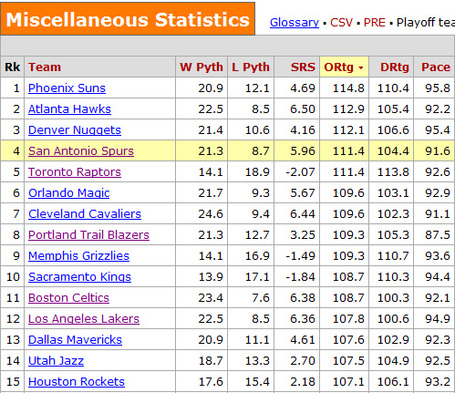 The Spurs are tied for the 4th-best offense in the league right now, although if the decimal points went further out, we'd see the Spurs slightly ahead of Toronto. Not too bad, huh? Now we'll look at Hollinger's offensive ratings, where our turnover rate knocks us down a bit. But, we're still in the top 5, after being 7th last week, so not really much to complain about. If the Spurs can clean up the TO's, they should be able to pass Toronto and Denver in the rankings, bringing them to 3rd overall. I don't have to tell you what a departure that is from previous seasons.

As Spurs fans, the offense is a nice luxury, but that's not what we care most about. We want to see this team get stops. Last week when we looked, the Spurs were the 11th best defense in the league, by efficiency. What does it look like now? 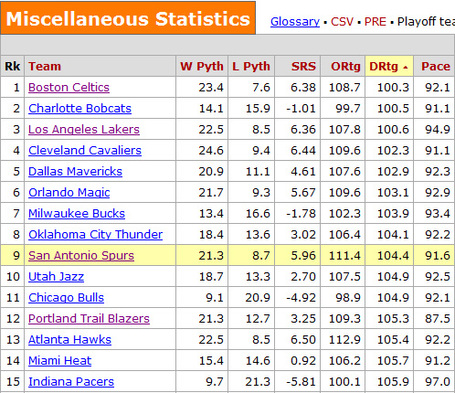 So they've moved up, but here's where I play Debbie Downer: All 4 of the teams the Spurs played over the last week are in the bottom half of the league in terms of offensive efficiency, but their best defensive performance by far came against the best of those 4 teams(Miami). And there's some other good news: the rebounding woes experienced earlier in the season are pretty much completely gone. The Spurs have the 2nd best rebounding rate in the league(after Memphis, of all teams), which helps them rise another spot to #8 in Hollinger's defensive rankings. If they can keep up the good work on the glass, and play tough defense like we saw in the second half against Miami consistently, this team will be who we thought they were coming into the season: One of the league's juggernauts.

It's been a while since we look at the leaguewide Simple Rating System (SRS) ratings from B-R, so let's do that now. 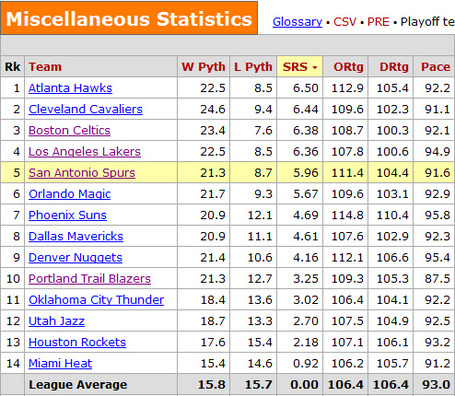 After that demolition of Miami last night, the Spurs have moved up to 5th in the league in terms of their overall efficiency by the SRS metric. They're still second in the West, but tantalizing close to the Lakers - a couple more big wins should put us into the pack of teams with 6.0+ ratings. I say "a couple" because the next two games are against weak competition, not a team in the top half of the league like last night's contest.

And finally, we come to Hollinger, whose power rankings really like the Spurs. Again, I prefer the SRS method because of its simplicity, but Hollinger's computers weight the most recent 10 games more heavily, and that's led to the Spurs being 3rd-best in the league by his calculations.

The Spurs improvement has been evidenced by the results on the court lately, but it's nice to see statistics backing it up. But the real tests are going to start soon. Our next 3 games are against Washington, Toronto and Detroit, so those won't really tell us anything. But after that, we have Dallas and the Lakers, with one cupcake(New Jersey) in between. The big games are just around the corner, so the Spurs would be wise to speed up the learning curve and gain some more consistency.

Happy New Year, everyone! And may the Spurs make it a great year for us to watch them.