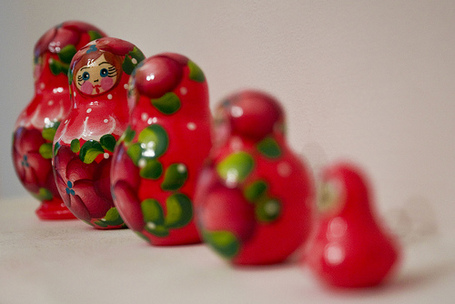 You know what the Silver Stars remind me of lately? A matryoshka. You think you know what you have, but when you look closely, another hidden doll appears, and another, and another. During our four-game losing streak I had this team pegged as a three-woman show: it was Becky, Sophia and Ann against the Martians, with Vicky tagging along to let Becky rest for a few minutes from his "dribbling the ball past halfcourt" duties. That's it.

But then the Stars started winning, and one of the main reasons for our sudden success was Vickie Johnson's spectacular play. She's now shooting and attacking the basket as if this were her 5th season in the league and not her 13th. So okay, it should be 4 stars and no role-players, right? Wrong, because at least for one night Lawson-Wade rediscovered her shooting touch and showed off an unprecedented (from my perspective, which doesn't mean much) court vision, joining in the fun.

We're one game behind the Sparks, and one game above the Lynx. Anything can happen, folks. All I know is that if we play like we did on Saturday, then the championship isn't a dream.

More positive thinking, self-delusion, recaps and previews, after the jump. 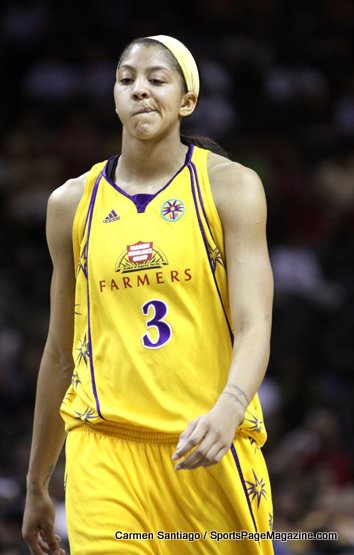 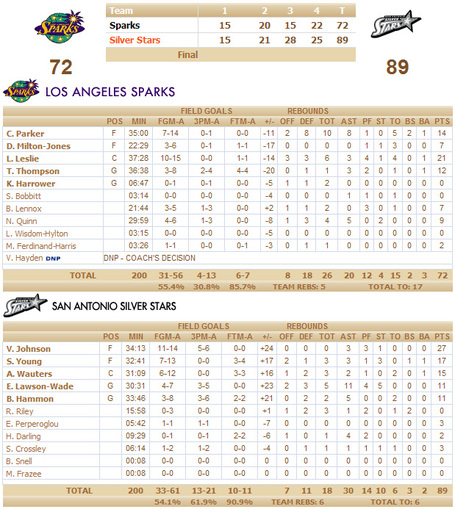 The other day I said the Stars were clutch. I'm willing to extend the definition of "clutch" to whole games that can decide the outcome of the team's season. The Stars needed that game, as they do the next three, if they want to make the playoffs and have a fighter's chance to win the championship. Their opponent was their direct rival in the playoffs run. That's a high-pressure situation, and they responded with one of their best games of the season.

I'm going to be brief: the Silver Stars won because they shot lights out, passed the basketball beautifully, falways inding the open woman, and took care of the ball. As simple as that.

The first half was a bloody battle, but not a defensive battle. The Sparks actually shot 68 percent in the first half - including 9 of 11 in the second quarter - and somehow they trailed 36-35 at halftime. How did that happen? Turnovers (the Sparks had 17 TOs, which led to 19 points for the good gals, against 6 TOs for the Stars). Los Angeles blew a six-point lead after they committed two turnovers and went scoreless for the last two minutes of the half. A Vickie three with 29 seconds left cut the Sparks lead to 1 with 29 seconds left, and then she hit a buzzer-beater to give the Stars a one-point lead. It was that kind of night for Vickie.

For once, the third quarter belonged to San Antonio. Vickie continued playing as he had at the end of the first half, and made 6 of 7 shots in the quarter, including three triples. Hammon chipped in with 6 points, and Sophia and Ann with 2 more each. A 14-4 run extended the lead to 11, and that, as the saying goes, was that.

How good were the Stars? Well, they were balanced: Besides Vickie's 27 points, Edwige had 11, Sophia had 17, Ann had 15 and Beckie 11. For the first time in the season all five Silver Stars starters scored in double figures. They also had franchise records for assists (30 on 33 made field goals), assists in a half (17 in the second half), 3-pointers made (13) and 3-point field-goal percentage (61.9).

Is the team learning how to win? Or maybe I'm just the one learning old cliches.

Notice how Becky prodded VJ into rethinking her retirement. Hmm... Bruce, anyone?

3rd - Sophia Young: Sophia is hurting. Apparently she had a wrap on her right knee and wasn't her usual self. You probably couldn't tell by just looking at the boxscore, though, because she had her usual 17 points, 2 offensive rebounds, 3 assists and 3 steals. Just another day in the office for our talented forward.

2nd - Vickie Johnson: Vickie Johnson. Wow. She tied her career high with 27 points on 11-of-14 shooting. Vicky is determined to retire with a ring on her hand. (The WNBA uses rings, right? I'm such a noob.) She had 0 rebounds, which is rare for her, but she was dominant offensively. Her +24 +/- was a game high.

1st - Edwige Lawson-Wade: So.... who saw this one coming? 11 points on 4-7 shooting (3-5 from deep) was possible, but career highs in assists (11), rebounds (5) and steals (5)? Just an incredible all-around game from one of our role-players, and exactly the stuff we need if we want to get anywhere.

Just a couple of videos that I found on Silver Star Nation's forum. Check them out:

Becky's HalfCourt Shot
Becky nails it from half court during her pre-game warm up. (Too many Becky videos? Get out of here.) Thanks go to HotForHammon again.

Anyway, not much time left, so let's write some sort of preview for tonight's game.

As I mentioned on Saturday, today's game will be "Lisa's Farewell Game". Yup, Lisa Leslie is retiring, and the WNBA will miss her. Not many players have achieved her fame, and I'm sure that's very important for a struggling league like the WNBA. If you have the chance to watch her play tonight, you should do it.

Some bullet points, blatantly ripped off the official preview:

The Silver Stars and the Sparks (so much glitter) have met twice this season so far, with a win for each team.

And finally... finally! Today we actually have LIVE ACCESS. If you're lucky enough to be able to watch it on TV, KMYS and NBA TV will both have the game.