FIBA Americas 2009 Recap: Tiago Splitter and Friends Are The Champs

Share All sharing options for: FIBA Americas 2009 Recap: Tiago Splitter and Friends Are The Champs

Brazilians are on a high and are probably capoeira-ing all week in celebration of their basketball team's latest victory.

Did Tiago Splitter contribute something significant to the successful outcome? Jump in and find out.

Before we proceed to the championship game, it's best to take a look at a few games prior to the finals, just to put things in perspective. 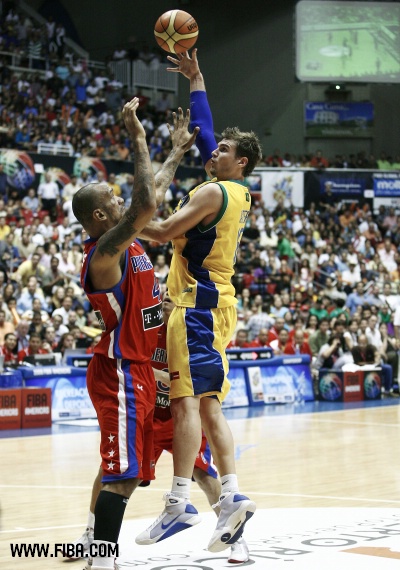 With the absence of Team USA, there isn't really any team in this tournament capable of dominating everybody, thus the potential for a lot of nail-biting finishes when it comes to games that mattered. Up to this point, Brazil had only been tested by Argentina and Canada, and passed these tests with flying colors.

Having already won 3 of its quarterfinal games and qualified for the semifinals, Brazil went up against host country Puerto Rico in what was to be a Finals preview of the tournament. Since it was a no-bearing game, we would've expected zero stars and full of bench player futility, right? However, FIBA don't ball like that. That's what I like about these tournaments, there's no such thing as a no-bearing game and everyone goes all-out to win.

So as NOT expected, this game was highly testy and featured a great comeback by Brazil in the last few minutes of the game. The turnaround was sparked by 3 technicals called on Brazil, with Tiago Splitter accounting for one of the three (Tiago won't be bullied, you bullies!). These resulted in six big free throws by Puerto Rican gunner (and a Spurs camp participant some years back) Larry Ayuso that padded Puerto Rico's lead by 19, 73-54. The situation seemed to motivate them Brazilians as they slowly chipped away at the lead spearheaded by guards Marcelo Huertas and awkward-shooting Alex Garcia, and forwards Anderson Varejao and Guilherme Giovannoni. But alas, the comeback was staged a bit late and Brazil finally experienced its first taste of defeat in the tourney.

After sitting out the game prior to this one, Tiago Splitter was a big ball of energy out there, dominating the Puerto Rican frontline for 19 points and grabbing 8 boards, 4 of them on the offensive end. Tiago was also 1/4 from the stripe - true Spurs goodness. Varejao was equally a beast with 22 points and 10 boards (5 offensive) as the two big men held the fort while Barbosa was given another game off to rest.

(You can watch game highlights here. I'll put them up once they have it on youtube.) 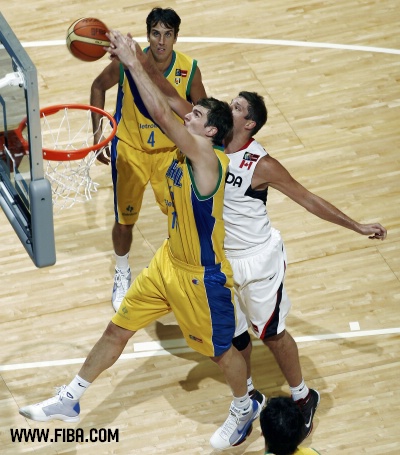 Even with the loss, Brazil ended up first after 4 quarterfinals games owing to a higher quotient. Puerto Rico needed to win by 6 points if it were to surpass Brazil, but was unable to do it. The net result: Brazil got an "easier" opponent in Canada, a team that it has beaten in the QFs, while the big guns of Puerto Rico and Argentina were forced to duke it out on the other end.

Two games of rest did wonders for Leandro Barbosa similar to what it did for Tiago, as the Brazilian Blur tore up a missing-you-Steve Nash Canadian team's defense for 22 points. After a monstrous game, Splitter came back to earth with just 6 points and 4 boards. He was, however, the best passing big man for Brazil out there collecting 4 assists. I don't have anything to say and I'm just filling up this post with this extended sentence. On to the finals and the gold then, Tiago and friends! 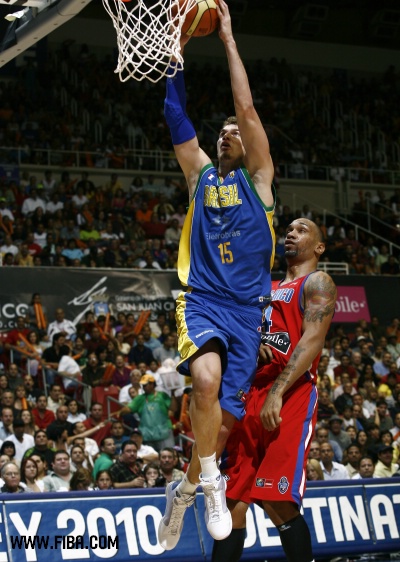 A fitting end to a hard-fought game. Puerto Rico, after getting revenge against Argentina and weathering 31 big points from Luis Scola, was coming in feeling like the team destined to win it all on their home floor. The only thing is, Brazil jumped the gun on them early on. The Brazilians established double-digit leads for almost the entire game up to the final minutes, echoing shades of the first encounter between the two teams but only this time, the tables were turned in Brazil's favor and Puerto Rico had some catching up to do.

The game was a pretty low-scoring affair as Brazil, egged on by coach Jose Manuel Monsalve to do better on the defensive end after their only loss, pretty much locked down the Puerto Ricans. Brazil almost had a meltdown in the face of a searing fourth quarter run by the hosts, and narrowly avoided a collapse when Carlos Arroyo missed a desperation three-point shot at the buzzer. In the end, Arroyo was the only Puerto Rican in double figures with 14, while counterpart Leandro Barbosa, despite a poor shooting night (39% FG%, 13% on 3-pt FGs), was on attack mode all game and lifted his team with 24 points.

Shaking off a bad game against Canada, Tiago was locked in for this one and showed poise under the pressure of a big game (he did miss a shot in the final seconds which would've given his team a 3-point lead). The raucous Puerto Rican crowd also made it all the more impressive for Splitter to admirably perform. He finally got out of teammate Anderson Varejao's shadow by scoring 13 points, which was absolutely crucial in a low-scoring affair, and outrebounded Andy by grabbing 9 boards. Tiago also had a game-high 4 assists, which is always a welcome statistic.

So there you have it, Brazil is the 2009 FIBA Americas Champion. Congratulations! (Argentina also captured third place so whoopee for Manu)

(Highlights also not yet on youtube but you can watch them here. Tiago makes a beautiful pass to Andy for the score in one play. And then Splitter also gets dunked on in an alley-oop play by the Puerto Ricans. Oh, the hassles of being a big man in basketball.)

The (sort of) Skinny on Splitter

We've done a few notes on Tiago's performances in this tournament here, here and here. I don't want to make motherhood statements on his game as I've only seen the highlights and the only game I was able to watch was the one where Tiago didn't play, but I guess it's safe to say that he's been steady all throughout the tournament. Sure, he had some bad games but overall, you cannot discount his contributions to the team and you have to like the toughness that he's showed in battling inside the paint. I thought he was a mediocre rebounder before but he proved that he can at least match Varejao's energy off the boards, and the two just wreaked havoc especially on the offensive glass. 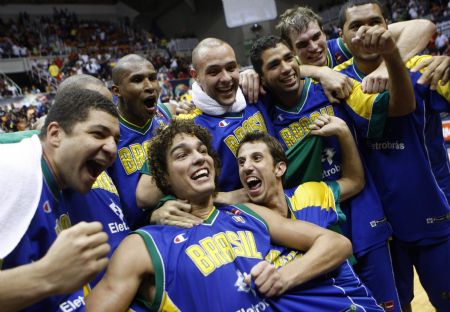 A solid contribution in the final game also helps warm the hearts of Spurs fans, and equally make us feel excited about the day he will finally don the silver and black. I hope that experience of winning will motivate him to finally come to the NBA, thirsty of lifting another but much, much bigger and more prestigious trophy. But for now, we will have to wait, fingers crossed, for just one more year. We'll also check back on Tiago at certain points during the season, and we'll monitor his progress in the 2010 FIBA World Championship.

Lastly, Glauber de Rocha and spursfan87 have also been watching Splitter closely this tournament. Maybe we can get some updates from you guys?

Up next: The Wee Frenchman and Les Bleus, plus other NBA hotshots from Europe will be playing this week in FIBA EuroBasket 2009 in Poland. You can check the schedule here.