Get to Know Your New Spurs #6: DeJuan Blair

Share All sharing options for: Get to Know Your New Spurs #6: DeJuan Blair

DJB: Is that a wine stain? RC: Well, Pop said he was just going to try it on for size...

So, last week, silverandblack_davis gave us an interesting look at the most enigmatic new Spur added this offseason - Marcus Haislip. Now it's time to find out more about PtR's choice for most exciting new addition to the Spurs: Mr. DeJuan Blair, whose nickname could be any one of 30 different things proposed on this site.

Obviously, we're all very happy that DeJuan slipped down to #37 in the draft. I previously wrote that by drafting him, the Spurs proved that they are the best-run team in the league, but maybe I shouldn't have been quite so complimentary. All it really showed is that other teams' GMs were stupid and/or frightened by the fact that all of them knew prior to the draft: DeJuan has no ACL's, after two knee injuries he sustained[and the reconsructive surgeries that followed those injuries], when he was still in high school. Seriously, every NBA team except Orlando[zero picks] passed on Blair at least once.

So, was it a bad choice? Is that why all those other teams passed on Blair? Let's learn a bit more about the man before we start jumping to conclusions.

A decent amount of research about DeJuan Blair will inevitably lead to one conclusion: this is an exceptional man, and he has "Spur" written all over him. Blair is quite possibly the most well-known, well-liked local figure in the city of Pittsburgh, if this article by Dana O'Neil of ESPN is any indication. [please ignore the political stuff]

He is the Pied Piper-grown gargantuan, a hometown hero who can't go unrecognized even hidden in a nondescript rental car. Grown men stop working to take a picture alongside him, and other adults insist he can't leave without putting his name on a basketball. And kids? Kids who don't know a thing about the University of Pittsburgh know who No. 45 is.

That article also includes quite a bit about the surroundings Blair grew up with.

Not a lot of hope comes out of Blair's neighborhood, and if it does, it usually takes wing for greener pastures. Once a cultural mecca and home to the Crawford Grill jazz spot, the Hill began to fall on hard times when the bulldozers made way for the Civic (now Mellon) Arena. Its population more than halved, the city's attempts at urban revival via new, well-appointed homes sit next to boarded-up shells.

But now, there are no kids outside Schenley [High School] as Blair drives by. A year after he graduated, the city shut the school's doors, citing an asbestos problem that would be too costly to remove from the 93-year-old building. Listed on the National Register of Historic Places, Schenley is just another vacant building in the Hill.

That's right, Blair has no ACL's and he's had prolonged exposure to asbestos. I, for one, prefer to think that dealing with the asbestos only made him stronger - you know, like the radiation that Godzilla was exposed to. Now if only there were some cold, mechanical, overrated center for Dejuan to go up against... 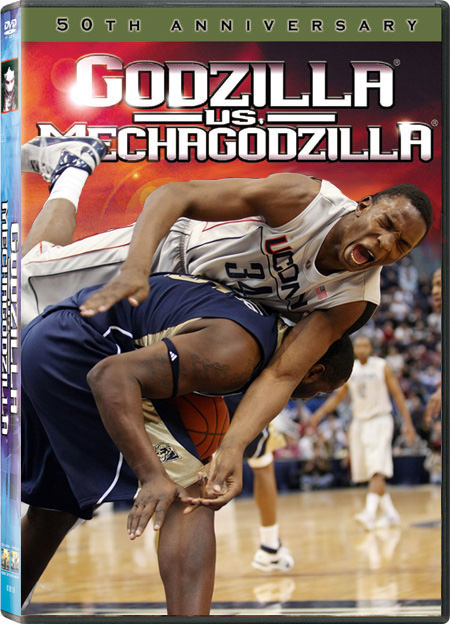 Oh, right - it's already happened. More on that below.

All exaggeration aside, I can't help believing that being from a place like that has rather profound effects on who you are, and how you prioritize your life. He definitely doesn't shy from attention, but Blair's definitely got one thing I like to see in silver and black: heart. In fact, this is a guy who's so full of heart and desire, it might even make Manu jealous[OK, maybe not... but you get the point]. Which brings us to the basketball side of DeJuan's history.

A History of Winning

So, everyone knows that both of DeJuan's knees were surgically repaired during his high school years, and the subsequent years saw the scar tissue fuse with muscle, leaving him with essentially no ACL's. But since he played his senior year at Schenley High School, and two more years at Pitt, without incident, this wasn't as much of a concern for me as finding out DeJuan brings to the table as a player. So, that senior season at Schenley, how did Blair's team do? Well, they only won the state championship in their class. 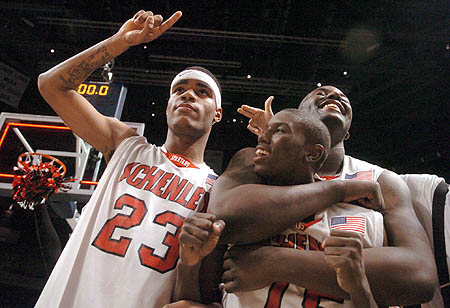 
The first higlights in this mix are from Blair's high school days - sorry about the video quality... I think Nike might have confiscated the originals

Blair only had 18 points, 23[!!] rebounds, 6 blocks and 2 steals in that championship game. But that was high school - surely he wouldn't fare nearly as well under the pressure of playing his college ball in one of the better hoops conferences in the nation, right? Surely his knees would show signs of deterioration with the more serious competition, and physical play that came with it... right? Surely that was the expectation, with Blair's injury history and small size for a PF.

So, DeJuan decided to take an athletic scholarship from the local school, Pittsburgh. In doing so, he turned down what was probably a more attractive offer from Tennessee(I guess now he can ask Marcus Haislip whether he missed out on anything). So, was the college game too much for him to handle? Not even close - in his freshman year, he averaged 11.6 points, 9.1 rebounds per game. Those are pretty impressive stats, especially coming from a freshman. This prompted an appearance on the cover of a rather well-knows sports publication. 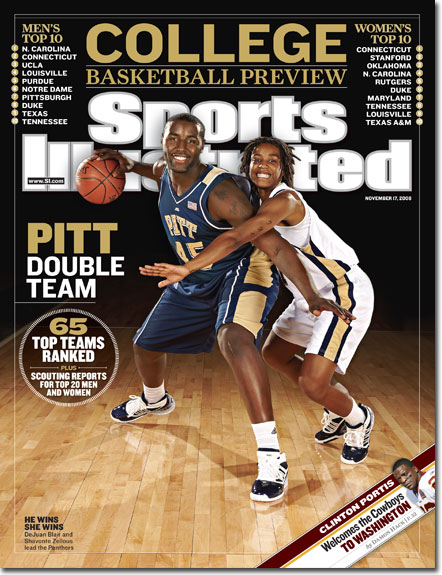 But there would be no SI curse for Blair. Instead, in his sophomore season, he burst onto the scene with 15.7 points and 12.3 rebounds per game, and even led the nation in offensive rebounds(by a mile), win shares per 40 minutes, and PER. And more importantly, he had no recurrence of knee injuries during those two seasons, whilst appearing to get much stronger during that time, rather than fading.

Notice that his minutes barely changed, but the scoring and rebounding became much more prolific in his second year. Blair and his teammate Sam Young(now with the Grizzlies) would lead the team in both of those seasons. Pitt won the Big East Tournament in Blair's first season, and became one of the favorites to take the title in the 2008-09 season. In that second season, Pitt went on to earn a #1 seed in the NCAA tournament before losing to Villanova in the "Elite 8" round. Along the way, Blair was named Big East co-Player of the Year. That's right, he tied with Thabeet for that title, despite the game that was alluded to above.

The Draft and Beyond

In between Pitt's tournament loss and the NBA draft, Blair dropped from 315 lbs to 275, and nowadays says that he is down even further to 260. Because of concerns about his height, and the old injuries that have caused him to be a freak of nature, Blair fell down the board in a lot of mock drafts. However, he was still considered a consenus top-20 pick in most circles. What followed on draft night surprised nearly everyone, not least of which was RC Buford. Buford was ecstatic when such a prolific rebounder simply landed in the Spurs' laps at #37, and made sure the ink was applied to paper during Blair's summer league stint with the Spurs. 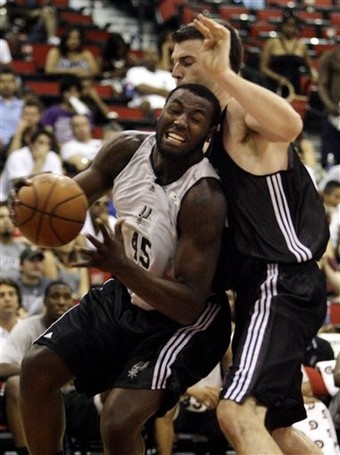 He was by far the most popular Spur among fans at the Summer League in Vegas, as evidenced by the people crowding to get his autograph after every game. This photo was taken after he had already been held up after the game against Portland due to a video interview by the NBA.com crew(Malik Hairston, the last new-ish Spur we haven't profiled, is also in this pic, at the top right).

Let's hope that all the weight he lost prior to the draft, and the work he's put in at the Spurs' facilities since the draft have paid off with even more improvement. Especially if RC Buford's prediction of Blair being a main contributor to the team off the bench come true. Blair is going to be fighting a couple of other new arrivals in Theo Ratliff and Antonio McDyess, as well as Ian Mahinmi, for minutes. We can only hope that we'll see more of Blair in silver and black than this: 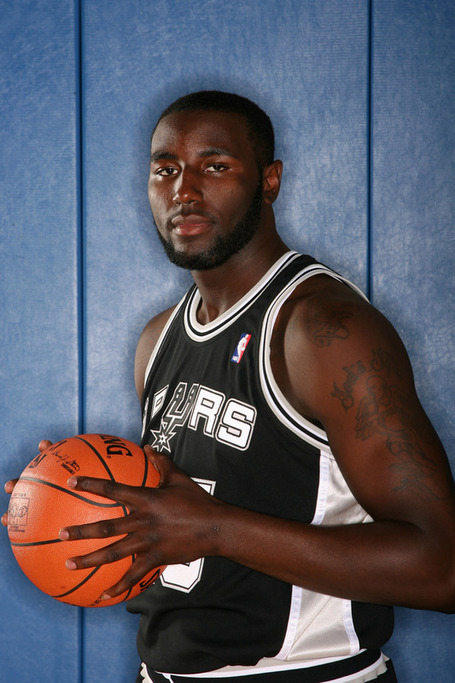 Isn't that a beautiful sight? 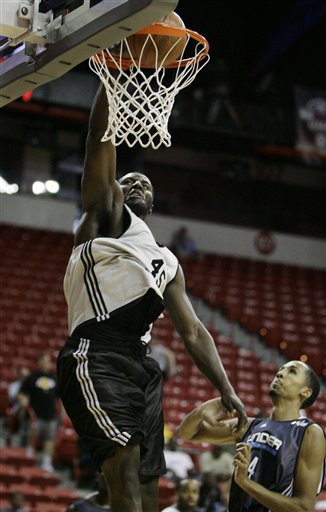 Wait - another guy who can dunk? Somebody tell Pop to bring some Dramamine to the games this year.

So, DeJuan is a Spur now. What do the Spurs expect and/or hope to get from him? Well, his style of play bears a striking resemblance to former Spur, and energy guy extraordinaire, Malik Rose. His motor never stops, and he's relentless when he gets within range of the ball. However, his rebounding abilities would seem to place him as Malik Rose 2.0. DraftExpress lists his "best case" as Paul Millsap, though he already seems to have a lot of that ability.

Blair's Draft Express profile says that his a few of his weaknesses are on the defensive end: defensive fundamentals, lateral quickness, and pick-and-roll defense. As we all know, if he doesn't "get" the fundamentals of the game on the defensive end, Pop will exile him to the bench until the results of any game are no longer in question. The good news here, of course, is that the Spurs are the perfect team for DeJuan to learn those fundamentals with. After that, he can work on the pick-and-roll defense as well. The lateral quickness may never come, but it'd be nice if his weight loss and conditioning over the summer led to better lateral foot speed.

If DeJuan develops a reliable jump shot and the aforementioned defensive fundamentals, he can be a key part of a merciless Spurs second unit that beats their oppenents into submission.("Oppenents" © 2009 Ron Artest) If Blair, Mahinmi, and Haislip all work out the way we hope, not only will the Spurs have the deepest frontcourt in the league, but Matt Bonner could be rendered useless, except as the new human victory cigar. Well, either Matt or Ratliff, anyway.

Overall, there's a lot to be optimistic about with Mr. Blair, though caution is definitely advised. He definitely brings a new wrinkle to the team, being especially ferocious on the offensive end. Is it possible he ends up a bust? Yes. Is it possible he ends up being the next Sir Charles? He definitely could. But it's too early to say - most likely he ends up being a very good role player, similar to Millsap or Rose. I'd be perfectly happy with that, and any further development as a player would just be an added bonus. As Spurs fans, we'll likely be seeing a lot of DeJuan in the coming years, provided he doesn't regress. 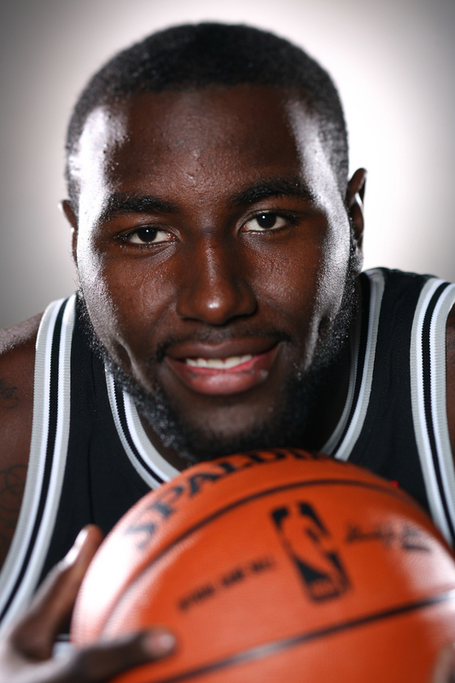 Which brings us to the most contentious DeJuan Blair issue here on PtR.

Really important, I know - but this has to be decided sooner or later. There's been a ton of nicknames proposed on PtR for DeJuan. Some of them have been extremely nerdy, and some not so much. There's also at least one nickname that he's had before - "Grizzly" Blair. So, which one wins? I guess we'll just have to wait and see what nickname sticks on the game threads, Where the Magic Happens™.

Other Articles in This Series:

After this, the only Spurs player left that wasn't on the opening day roster last season is Malik Hairston. We'll find the time to do an article on him at some point.