As is my habit, as soon as the Spurs released their schedule I immediately scanned it for back to back games. I always dread the back to backs. It turns out we have 17 this year, which as far as they go, is a low number. At that I was able to breathe a sigh of relief. But then it occurred to me, I have never actually seen statistics on back to backs to verify my fear. Logically, it makes sense for Spurs fans to fear them and that had always been enough for me. After all, the Spurs have an aging roster that cannot recover as quickly as younger teams. We also have key players that are injury prone which results in Popovich cutting their minutes during back to backs as a precaution. And if a player is ailing, Popovich will sit him without hesitation for the back to back as we saw him do with Duncan last season. So, we have to be significantly worse, right? Glad you asked. Continue reading to find out.

Directly below is a summary of the data I derived using raw data from Basketball Reference. 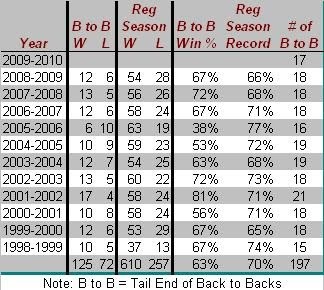 While the Spurs do have the second least amount of back to backs in the NBA this upcoming season, as you can tell by the chart, it is nothing to get too giddy about. It's not like we have 10 less or anything. If we had just 4 more, it would be tied for the most back to backs the Spurs have had in more than a decade. Below is a graph that visually represents this same data. Please note that I chose to use winning percentages because in 1999, the lockout shortened the season so simply using wins and losses would have skewed the data. 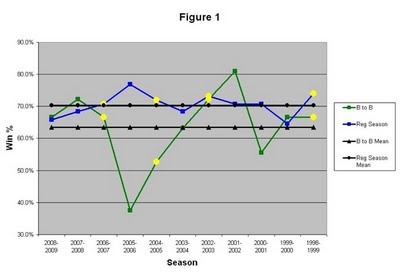 Well, for one, I expected the difference between the two averages to be much greater. Since I have feared the dreaded back to backs for so long, I could not imagine the percent difference to be less than 12%. Obviously, I was wrong. On average, over the past 11 seasons, the Spurs have lost only 7% more when playing back to backs as compared to the regular season average. Is 7% worth having no fingernails by April?

Interestingly, one could make the argument that as the Spurs have aged, they actually have improved in back to back contests. At the very least, we can agree that the Spurs have not become significantly worse over the years. I think this can be attributed to experience. Going into the tail end of back to backs, experience allows the Spurs to better mentally prepare for them. They know that they need to come out strong from the start so their opponent does not gain confidence. If their opponent stumbles early, the Spurs know they must immediately pounce so Popovich can rest his starters with a comfortable lead. And experience gives the Spurs confidence that they can keep the game close and secure the win in the fourth quarter with defensive stops.

Obviously, I have come to the conclusion that I have spent far too much time worrying about back to backs in my life time. Although we generally lose the tail end of back to backs more often than other regular season games, it is only 7% more than our regular season average and the results vary widely each season. The results of back to backs definitely do not reflect whether the Spurs will win a championship or not. So next time the Spurs have a back to back, sit back, relax, crack a Bud, and know it's not as crucial as most make it out to be.