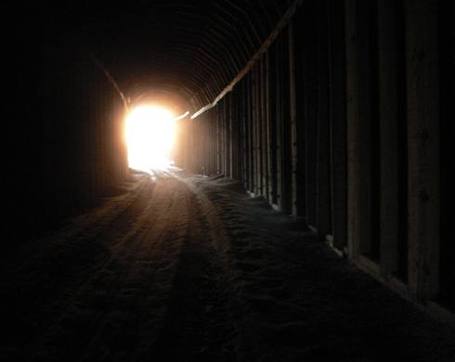 Okay, so it's probably a train. With ligers on top. And a bomb.

Well, I guess that right now the only thing in our minds is Bowen's retirement. However, things are happening on the Silver Stars front: good things, right things, joyous things.

Let me know if this sounds familiar to you: team does only well enough to keep up with its opponent throughout 4 quarters, sends the game to overtime in the last play and then wins heroically in said overtime - or even a double overtime. No, I'm not talking about the 2008/09 Spurs here. It's our Silver Stars that are suddenly following that familiar pattern, and I'm hoping against hope that Hollinger's talk about point differential is crap and their recent success is a sign of future success to come.

After a 0-4 start since I began to blog about them, Becky and co. are now on a 2 game winning streak, and there are only 4 games left in the season. Let's get some momentum going, after the jump. 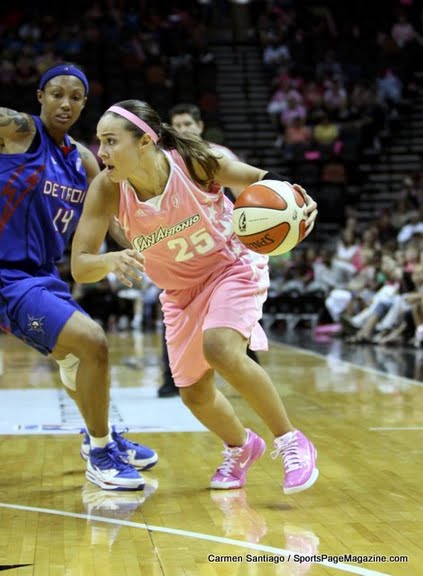 You really thought I wasn't going to show Becky in pink?
(Photo taken from SportsPageMagazine) 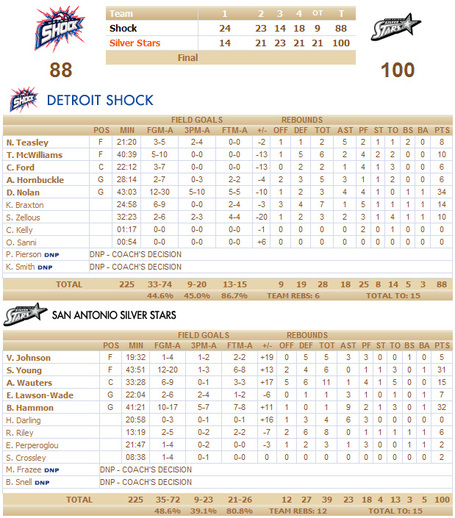 Before I forget, I want to thank the WNBA for making it impossible for foreigners like me to watch this spectacular game. Only the kindness of some folks who must've tivoed it or something made it possible for me to catch part of it, so thank you, strangers (and thank you, justin.tv, for your wonderful new features). Despite Phoenix Stan's truthful comments about this being a work in progress, you really need to get your act together if you want to sell your product to basketball enthusiasts around the world. For the Minnesota game, bell and I couldn't even get your pitiful audio feed to work.

Everything was set up perfectly for a Stars win before the game began: Katie Smith, our nemesis from the last game, was out; we were rocking the pink unis; the crowd was roaring, and last but not least, we had a pissed off Becky Hammon looking to bounce back from her worst game of the season (a 0 point uglypalooza in Thursday’s loss to the Fever). And win we did. Barely.

I won't bore you with the details, but Becky started cold and where she goes the Stars follow. We were in a 10 point hole after the first quarter, and the difference stretched to 12 at the half. Only Young's excellence and consistency kept us in the game (Becky had 4 points after 20 minutes), and I'm quickly learning to love the talented forward from Brooklyn. Are you sure that we can't sign her as Duncan's backup/partner in crime? I've seen more moves from her than from Tiago in the FIBA world cup qualifying tournament.

For once the third quarter was San Antonio basketball time. Hammon and Wauters joined Sophia and despite the lack of help from the role players, together they outscored the Shock for that quarter by 9 points, bringing us within 3 with a quarter left. In fact, our Big Three accounted for all of our points in the third quarter. Yeah... that's healthy. Regardless, we entered the last quarter with some momentum, and Becky got to work - she scored with a layup, then a three-pointer, dished out a couple of assists, was fouled, had more assists... She did everything, finally playing up to her potential since I started watching the Spurs. It was incredible, and bell's comment about bringing her over to the Spurs didn't seem so silly. I love you, Becky!

Ahem. Despite all that the Stars were 77-79 with 21 seconds left, so the biggest play of the night came from Sophia, who could teach Manu a thing or two about clutchness and drilled a jumper from the right elbow (off a pass from Becky, of course) to send the game to overtime. And in overtime, then Stars played perfect basketball. Sophia did her thing, Becky continued to score at will (including back-to-back 3-pointers) and get her teammates involved, and a certain blogger's eyes filled with tears when he realized his game threads weren't jynxing the team after all. Sniff.

Some numbers to put this game in perspective:

Anyway, it was a damn good game, reminiscent of some of the classic Spurs overtime wins from last season. I'm happy.

Our Stars react after the game, for once with a smile on their faces.

It's funny that Sophia says she was nervous after the shot. That's how I always imagined high pressure sports situations. And is it just me or did Coach Hughes look tearful at the start of the video? Sniff.

3rd - Ann Wauters: People keep complaining about her plentiful TOs. You know what I say to those people? WHAT-EVAH. There is no playoff dream without our lovely, skilled blonde center. As we say in Argentina: Yo te banco, Ann. 15 points and 11 rebounds (5 offensive) is nothing to sneeze at.

2nd - Sophia Young: 31 points matched her season-high. She scored in every quarter and kept us in the game in the first half. I just wish she grabbed more rebounds, but hey.

1st - Becky Hammon: What a player, guys. If she was a guy I'd be calling her a "stud". I'm not sure what the female counterpart would be... Amazon? 32 points and 9 assists allowed Becky to become the 2nd player in WNBA history to reach 4000 points and 1000 assists, joining none other than Vickie Johnson. Some more numbers from our friends over at the Silver Stars Nation forum:

And as it's always the case with truly great players, numbers can't quite describe her. 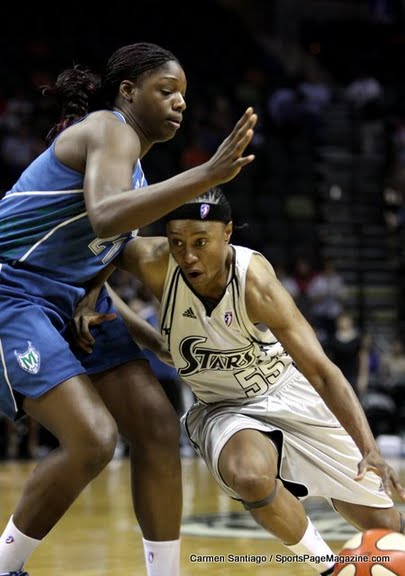 "I'm NOT too old for this shit"
(Photo taken from SportsPageMagazine) 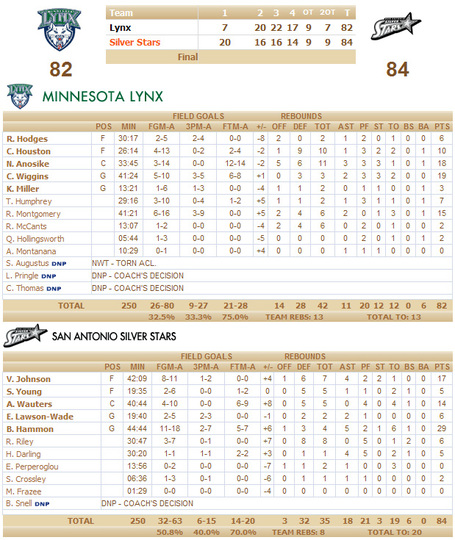 I thought of copy/pasting the last recap, but this game was far too important for me to be lazy. How important? Well, the Mynx were tied with the Silver Stars for that 4th and last playoff spot at 12-17, and this was the last game between those two teams. So basically, they lost one and we won one. A two-game difference that might've put us out of the playoff discussion.

I'm going to talk a bit about Vickie Johnson later, but just know that tonight was "VJ Night" in more ways than one. Sophia Young tweaked her left knee early in the third quarter, and she hadn't played well before that, so she was benched for the remainder of the game. Considering how dependant this team has been on its Hammon-Young-Wauters Big Three, that would've probably spelled doom for the Stars on any other night - we needed one of the role players to step up, and it was Vickie, the wily veteran, who came through. Her efficient scoring saved our pretty butts against the Lynx, and it was the kind of perfect story that I wish Bruce had had in his last season as a Spur.

The Stars started strong, winning the first quarter 20-7 thanks to the combined effort of our Hammon-Johnson dynamic duo. But they wouldn't be a San Antonio team if they hadn't let the Lynx get back into the game and somehow manage a tie after 40 minutes. The Lynx even had the last shot in the 4th quarter, but thankfully they Montgomery wouldn't even hit the rim.

Our faults are the ones I've come to expect: turnovers and deficcient rebounding. Allowing the opponent to grab 11 more offensive rebounds than you is a recipe for disaster, and we only narrowly escaped it on Tuesday. What's the difference between the last two games and the four that came before it? Mostly our three point percentage, and Becky Hammon. For the second consecutive game Becky just wouldn't let the Stars lose, and scored most of our points in overtime. The biggest shot of the night was VJ's, though - 45 seconds left in overtime, Vicky drove to he basket, finished with a Tony-layup and tied the game. The Lynx would miss another opportunity to win it, but no cigar.

The second overtime would feature a lot of Johnson, Hammon, Darling and Wauters, and not enough Wiggins and Hodges. Woe is them.

What's next for our Stars? We face Los Angeles twice, at home and away, Sacramento once, away, and Seatle once at home. Winning both games versus LA (a tall order, considering the Sparks have been playing much better basketball than San Antonio recently) would propel to the third place in the Western Conference, allowing us to dodge boogeywoman Phoenix. Then again, how great would it be to knock out the favorite Mercury out of the playoffs? Hmm. Sacramento is a must-win, and Seattle could hopefully be a preview of the playoffs.

But let's win one at a time.

There are a lot more postgame videos when the Stars win... Hmm. Or is it when they play at home?

If you wonder what the news guys are talking about in Vickie's video, check the "Extras" section to find out more about The VJ Day.

3rd - Ann Wauters: She was one of the culprits for our lack of rebounding, but she's still our third better player on a bad night.

1st - Vickie Johnson: On a special night for her, she didn't let the emotion affect her game and in fact used it to play at a high level and help her team get an all-important win. She's something else. 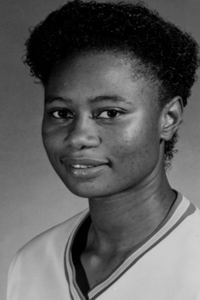 I've mentioned this before, but this is VJ's is retiring after 13 seasons in the WNBA. Before Tuesday's game, in what was called "VJ Night", she was honored with a video tribute and a framed jersey. Well, the Stars have put together a tribute site here. Go. I'll be quoting some parts of the article that I liked:

Barmore has high praise for his former star. "I love Vickie Johnson," he says. "I love what she's done. She was just so smooth. She might have 18 points and if you didn't understand the game, you'd think she only had two or three. She's a quiet assassin."

"She wanted to see how tough I was," says Hammon. "She was testing me." It was a test Hammon clearly passed and nine years later, the duo has played more than 200 games together. "I can tell you it's been an honor and a blessing to play with her," says Hammon. "I think she has humility and this quiet strength. It's unshakeable."

The following day, she stepped foot on the court in Silver Stars gear for the first time. Immediately, the team's intensity level tripled.

Next is a video featuring the coaches and Vickie's teammates talking about her, and what she means to the Stars. (Funnily enough, Sandy Brondello's audio was busted once again. Poor assistant coach can't catch a break.) It's worth giving a glance:

I thought that was a great video, and she's obviously liked and respected by her teammates - Becky was about to break into tears for a second there. Here's another about her career, with Vickie's comments: "Vickie's journey". Watch it.

Anyway, Vickie is a great player, and I'm sad I won't get to watch her more before she retires. Goes to show I should've paid attention to this league years ago. Best of luck to you, Vickie. 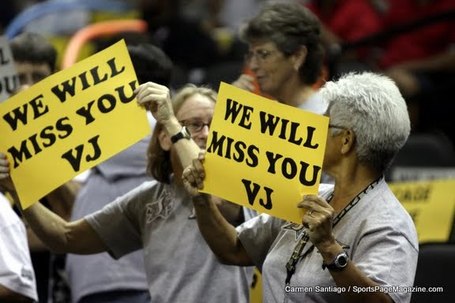 "In my world, every day is Vicki Johnson day." Becky Hammon