Is Age a Problem for the Spurs?

Share All sharing options for: Is Age a Problem for the Spurs?

Age is a sensitive subject for Spurs fans. For the past several years, ESPN analysts have posed the question, "Are the Spurs too old to win a championship?" They then explain that the Spurs’ average age is thirty-something while the youngest team in the NBA is around 25. We see these stats, listen to their logic, and doubt enters our psyche. We begin to think that maybe we are too old. Maybe they are right. After all, if enough analysts for ESPN are saying the same thing, they must be correct, right?

Well, I have several issues with the theories that are thrown around regarding the Spurs’ age. First, the calculation of the Spurs’ age is unscientific. As best I can tell, the average age is derived by simply taking the Spurs’ roster at that point in time and averaging everyone’s age. Is this a true representation of the age of a Spurs’ team? I think not. What if the Spurs have a 60 year old player that averages 2 minutes per game? Should his age carry the same weight as a 27 year old Tony Parker who averages 35 minutes per game? Would not the true average age be one that took into consideration the minutes each player spent on the floor?

In order to derive a more telling average age, I gathered raw data dating back to the ’99 season from Basketball Reference. I derived the weighted average age by minutes played for each Spurs team, the championship team, and the team with the worst regular season record for each season since '99. The weighted average basically averages the team’s age based on the minutes played for each player on the roster. So the team’s top minute getters’ ages carry more weight than those who did not play as often. In this way, we can get a more telling average age of the players that actually spent time on the floor.

Since the ’09-’10 season has not taken place, I guessed the minutes per game each Spur will average next season. I used these numbers to compute the weighted average age. Antonio McDyess is likely to see fewer minutes than I estimated if one of the Spurs' many bigs is successful, which would lower the weighted age. So this is a conservative estimate, since the older McDyess will skew the average lower than his replacements. Below is a table that displays my forecasted minutes for the upcoming season. 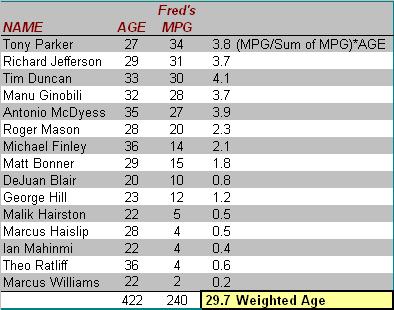 Analysts commonly use age to support their negative arguments about the Spurs. At some point, they stopped talking about the ‘veterans’ and began talking about the ‘old’ players that the Spurs utilize. But are older players really a bad thing? Do we not see veterans win championships every year? Look at the Celtics' championship team of two years ago. Pierce, Garnett, and Allen were in no way young.

So, let's take a look at the statistics and see if they validate or negate what we have been told about our aging Spurs. 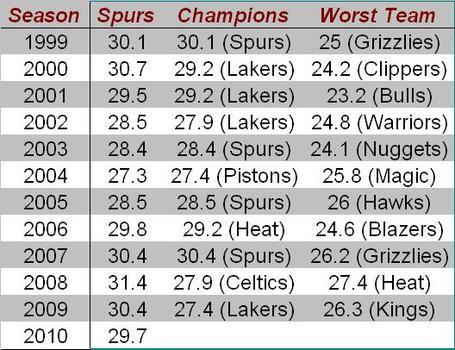 In the table above we have each season dating back to 1999 followed by the weighted average age by minutes played for each Spurs team, the championship squad, and the team with the worst regular season record for that season. (Please note, in several seasons there were ties for the worst regular season record. In these instances I chose one of the tying teams at random for my data.)

It's interesting that when ESPN analysts talk about the 'old' Spurs they always compare them to the league average or the youngest, (often times worst,) team in the league. The league average age is just that. If you want your team to be average, then do what everyone else is doing. If you want your team to be a contender each year, then follow the formula of loading your team with veterans that know the game and do not care about individual statistics. If ESPN analysts attempted to compare the Spurs' age to teams that win the championship each year, their argument would not be so convincing. Below is a visual representation of the data from above. 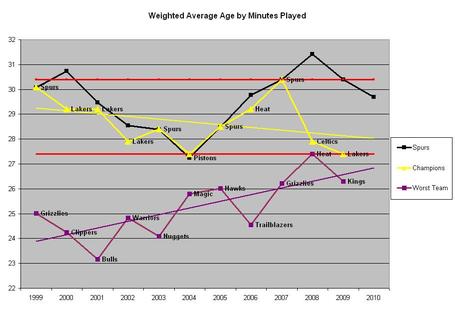 Also of note, in 1999 the Spurs' roster had a weighted average age of 30.1. The talk of the 'too old to win Spurs' did not begin until well after that season. Why would this be the case? Because once a franchise wins a championship, everyone nitpicks that team until a flaw is agreed upon, right or wrong.

Obviously, with age comes the risk of injury that all Spurs fans are very familiar with. However, that seems to be a risk that one must take in order to put a team in a position to win it all. The Celtics knew this risk when they teamed up Garnett and Allen with Pierce. It paid off in '08 and in '09 Garnett was injured and they lost. If Fisher and get hurt this season, will the Lakers regret not having younger players? Of course not. They realize that their veterans give them the best shot at winning a championship. In the same way, as Spurs fans we simply have to hope that our veterans can remain healthy during the upcoming season. If not, then so be it. The Spurs have built a team around veterans that are more likely to get hurt, but at the same time more likely to win it all if they can stay healthy.

Would any Spurs fan be willing to substitute a younger player for Tim or Manu to make the team younger? Is there a younger player out there that would give us a better chance of winning than either of them? If your answer is 'no,' then we are on the same page. While Ariza showed the dramatic impact a young player can have on a championship team last year, he was still the fourth best player on that team.

Having a younger team may be fun and exciting, but as you can tell from the data, it means your chances of going all the way are slim to none. Since '99, the youngest team to win a championship had a weighted average age of 27.4. It is noteworthy that many of the championship teams depended on veterans that were surrounded by younger players. In this way, their average age is deceiving. For example, last season's championship Lakers team featured Bryant, Gasol, Odom and Fisher; their average age was 30.3. However, the team's weighted age was a low 27.4 because their next top four minute getters, consisting of Ariza, Bynum, Vujacic, and Farmar, had an average age of 22.5 which skewed the data lower. In this way, while 27.4 may seem young, that team greatly relied on a 30 year-old core to win the championship.