It's Day 3 of the Quarterfinal round of the FIBA Americas 2009 Championship. Tiago Splitter's performances have been subpar for the first two games of the quarterfinals. Today, Brazil squares off against Uruguay. I don't know who the hell is playing for Uruguay. Anyway... c'mon, Tiago. Let's get this game for Bruce.

Hack recap and preview, plus your game thread after the jump.

I'm going to breeze through this one like a Brazilian Blur. Need for speed, baby. Can you keep up? (click on score line to see the boxscore for that game) 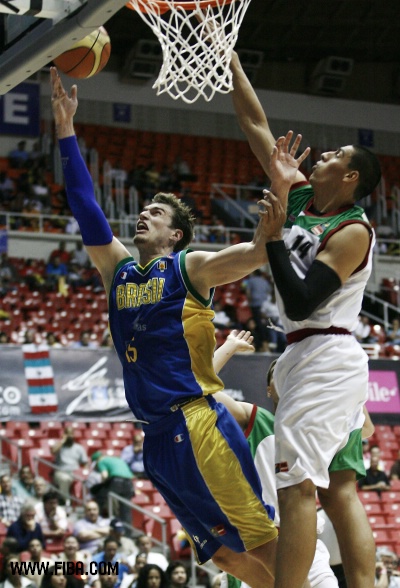 This was a beatdown right from the very beginning. Sans Romel Beck, Mexico just didn't have any chance. Beck who? Not the Loser, of course, but the player who was in the San Antonio Spurs' summer league team a couple of months ago.

According to this article, Beck was sent packing because he tried to pull off a Kobe. No wait, check that, the dude was Kobe-Bryanting. Definition: "selfishly being unselfish to prove a point." Can we get somebody from Webster's to include the word next year? It would make a lot of basketball fans happy, seriously.

Back to the game, Leandro Barbosa and Anderson Varejao again provided the goods for Brazil. Tiago's minutes were limited probably because it was a blowout. He scored just 5 points, all in the 1st quarter, and grabbed 6 rebounds. Okay, Tiago I will forget this blunder if you do good in the next one. 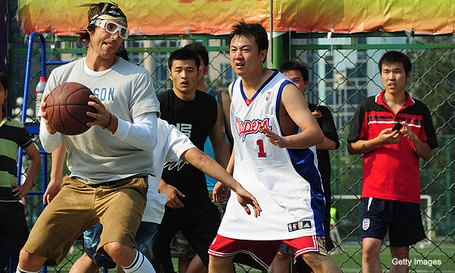 Absolutely, positively NOT the FIBA Americas.

Steve Nash is Canadian. But he's old now, so he would rather play people that he can beat up on... like Chinese, for example?

We will remember this game as the game where Leandro Barbosa went nuts: 31 points - almost half Brazil's points - on 69% shooting. That's it. Oh okay, stop making me feel unkind - he also had two steals and one assist. The rest of the team? PG Marcelo Huertas was the only other Brazilian to score in double-digits with 10, but he also dished out 6 turnovers. Yep, he dished the rock to the other team. Hurrah!

Meanwhile, Tiago had a Splitting headache in this game, hence he was a non-factor. I wonder if he got suffocated by Varejao's hair. Anyway, Splitter's untidy line included 2 measly points on ZERO made field goals, 4 turnovers, 5 rebounds and 5 fouls. He fouled out, just in case you didn't know that there are only 5 fouls in international play. Bugged by foul trouble, he was, hence the reason for getting only 22 minutes of action. Tiago was the leading assist man (3 assists) for Brazil, if that makes you happy.

Also, a commenter from 48MoH who watched the game said that *gasp* Tiago injured his knee in the first half but came back to play in the 2nd, although he clearly wasn't his normal, whirling dervish self.

Lastly, with the win, Brazil has already qualified for the 2010 World Championships. Woohoo, more Tiago Splitter for us!

I kinda know someone now who plays for Uruguay. His name is Esteban Batista. Sorry WWE fans, it's not the wrestler. Batista once played for the Atlanta Hawks during the usual seasons when the Hawks were mediocre and close to imploding. But in fairness to the guy, he's been a beast so far this tournament, averaging close to 18 points and 11 rebounds per game. You might want to put your respective microscopes on him during the game.

Uruguay finished the eliminations with a 2-3 record, while Brazil was a spotless 5-0. I rest my case. And don't go saying that an upset is still possible. That's like telling Kobe Bryant that he can win a championship without Pau Gasol. We're not done with you yet, Chris Wallace.

Says in the FIBA Americas website that the game starts at 18:30, GMT -4. I suck at timezones. If my prognostications are correct, the game starts in my country at 2:30 AM. Anyone want to take a guess where I'll be at that exact time? (okay, mebbe I'll try to wake up and find some feeds) Game time in Texas is probably 1:30pm? See, I suck at this. If somebody can give me the correct times, I will honor you for the rest of this game thread. If you get me some feeds I will bestow upon you god-like powers in this thread only.

Of course, you can always pony up some cash to watch the games in FIBA's official broadcast site. Not that you'd really want to cough out hard-earned money to watch non-NBA'ers go at it. I was told that the games will also be shown on ESPN 360, although I'm not sure if it's for free. Probably not.

But if you wanna go old school (and cheap) like boxscores, you can get them here.