So, you've probably heard the news by now. Bruce Bowen is retiring. While I'm sure we're all glad Bruce didn't sign with another team to haunt our playoff dreams, now is the time to pay tribute to one of the most prototypical Spurs players ever.

When Bruce Bowen played college ball at Cal State Fullerton, nobody would have imagined him becoming a defensive specialist. Bruce's game at that time was mostly scoring, and he averaged an impressive 16.3 points/game in his senior year(he never averaged more than 8 in the NBA). He was a solid prospect, if raw, and entered the NBA draft in 1993.

Unfortunately for Bruce, he wasn't drafted, and was exiled to the basketball wilderness that was France at the time. He would spend four seasons bouncing back and forth between France, the CBA, and even a brief stint with the Miami Heat (he played 1 minute for the Heat during the 1996-97 season). In the CBA and France, he was once again a scorer, even becoming one of the most prolific scorers in the French league at the time.

Then, in the summer of 1997, he was signed, traded, waived, and then picked off waivers by various NBA franchises. The team he ended up with - the Celtics - gave him plenty of minutes off the bench in a supporting role. His playing time steadily decreased during the two seasons after his first with the Celts, and in his third NBA season, he was traded from Philadelphia to the same Miami team that gave him his first brief taste of NBA competition. In Miami, Bruce changed his number and re-fashioned himself as a defensive specialist. He spent one and a half seasons with the Heat, before the Spurs picked him up in free agency during the summer of 2001, leading some Spurs fans (this one included) scratching their heads. Little did we they know what kind of difference #12 would make for their favorite team.

And the rest, as they say, is history. History that we can all relive right now. 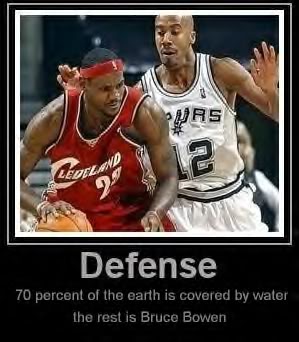 How to Play Defense Like Bruce Bowen | eHow.com
A great way of describing Bruce's game - all heart [and mind]

Bowen adds offense to his smothering defense - NBA - Yahoo! Sports
A trip down memory lane to the 2005 NBA Finals, when Bruce was arguably at his peak.

brucebowen.com - Community Assist Award
Bruce liked to strengthen his Spurs credentials by helping out in the community, in many different capacities. Speaking of which...

Bruce Bowen Foundation Official Website
Bruce is as proud of his foundation as he is of anything he's accomplished in basketball. Helping underpriveliged kids seems to be a recurring theme with Spurs greats.

Bruce's Bytes
Bruce still has a blog with the San Antonio Express-News. He may be ready to pursue a career in sports journalism, like Sean Elliot did for a while.

Personal anecdote: I once met Bruce on campus at UTSA, and he was just as nice and personable as his work with charities would indicate.

YouTube - Bruce Bowen hits a critical 3-pointer!
Bruce Bowen sank a 3-pointer with 36 seconds to play Wednesday night to put the Spurs ahead 84-81, their first lead since it was 11-10 six minutes into the game.

YouTube - Inside the Playoff Mind of Bruce Bowen
A look into the mind of one of the best defenders in the league.

YouTube - NBA Bruce Bowen Super Block To Paul Pierce comes in and swats his shot
Not in Bruce's house, PP!

YouTube - Bruce Bowen dancing
Bruce Bowen showing off his moves at a Spurs game during a time out.

After watching Bruce for 8 seasons, we all know now what the Spurs were hoping for when they signed him. Bruce became one of the most hated men in the NBA, because for years he made it nearly impossible for his man to get any breathing room, much less an open look at the basket. Of course, some of those guys he harassed were quick to cry like babies call him a dirty player, but Bruce "dirtiest player in the league" Bowen was consistently called for less fouls per 40 minutes than almost any of his NBA small forward counterparts. His reputation as a student of the game, and one of the hardest workers in the NBA, is one that is well deserved. What Bruce lacked in athletic ability, he made up for in his work ethic and basketball IQ.

Work ethic, dedication to community service, and basketball IQ: If Pop could design the ideal Spurs player with only 3 qualities, those would no doubt be at the top of the list. With that said, those are qualities that would also be very useful in an assistant coach, nudge-nudge(just saying). The benefits of having a guy like Bruce on the bench and at practices are obvious, but Bruce should only do it if he sincerely wants to.

Bruce Bowen will forever be remembered as a Spur. His contributions to 3 Spurs championships, combined with the embrace of Spurs philosophy on and off the court, should be more than enough to justify hanging #12 in the rafters at the AT&T Center. He will be missed. 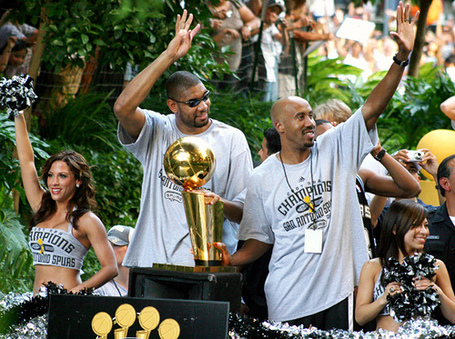 Update: You should all read Graydon's post at 48MoH also.