Oh Gregg Popovich. You are one of the greats. I doubt anyone on PTR or any true Spurs fan would trade him for really any other coach in the NBA. We don’t always agree with the man but are convinced that at his core he is the intellectual equivalent of a basketball assassin, who will devise schemes to win at any cost. Today begins the first part of my two-part series raising a glass to Coach Pop; the legend, the mystery, the man… 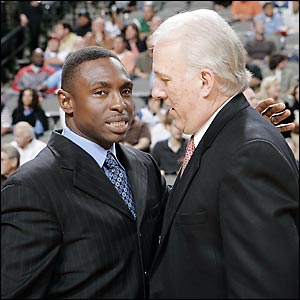 Just remember, I taught you everything you know... but not everything I know.

In his own right, Pop has developed a certain mythology that has reached near epic proportions. I feel no other coach in the NBA has more conspiracy theories about his motivations and strategies. There is a pervasive feeling that Pop constantly is hiding some advantage up his sleeve. Even in his weakest moments we all pull back before directing criticism, assuming he merely feigns weakness to trap his prey in his eventual ambush. How many times have you seen things written about Pop criticizing his decisions in a regular season game with the caveat, " But maybe he was just hiding his true strategy for the playoffs." How many other coaches in the league would ever even consider hiding strategies for exactly the right moment? One (Phil Jackson) or maybe two? Sure Pop has benefited from knowing for well over the last decade that he has unlimited job security and an almost guaranteed high seed in the playoffs no matter the amount of nonsense tinkering he does prior to them, but it still takes some cojones.

I believe there are three distinct qualities of Gregg Popovich’s coaching style that divide him from the rest of the NBA rabble.

His passive demeanor and zen approach to the game is just a façade. Just ask Tony Parker and you’ll learn about his pension for profanity and screaming. When you are on the court, you are giving 110%, even if you are Michael Finley and your 110% is still only about 60-70% of a regular NBA player.

Caveat: This rule only applies to certain players and only in the playoffs. If you’re named Tim Duncan or Manu Ginobili and it’s the regular season you are contractually obligated to give no more than 65%(still more than 40% higher than regular NBA players). 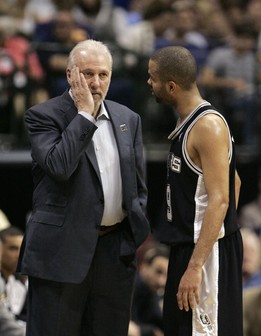 2. Willingness to try any strategy for an edge

No strategy is too bizarre. Even Pop’s steadfast hatred of unpredictability can withstand this man’s willingness to try out a peculiar but ultimately effective strategy.

In 2003 we had Stephen Jackson, who is equally likely to drain 8 3-pointers in a game as he is to stab an opposing players (yes literally stab them). Pop had no problem giving him 30 minutes a game and an open invitation to jack 3-pointers. We needed points and Stephen Jackson could deliver.

Another example is fouling Shaquille O’Neal in the playoffs in 2008. People had been Hack-a-Shaq’ing for years, usually to try to get back into games. Pop saw the potential to hold a lead. Sure it was cheap, sure it was an affront to the very game of basketball, sure it was not very entertaining, but damn it was cunning. Not only cunning, but it was incredibly effective. Phoenix never quite got into its groove. The looming comeback runs that Phoenix is famous for never materialized. It was a cold-blooded and unexpected strategy that only further proved the ruthless nature of Gregg Popovich.

You could also consider benching starters this previous season. From day 1 this year Pop knew that injuries and health was our main barrier to post-season success. It is easy to look back at the game against Denver and say that we probably should have played our best players. It even got close in the fourth quarter. At that moment he could of plucked Tony and Tim off the bench and told them to go close it out. But Pop truly believes we can win anywhere and anytime as long as we have our best players. Sure Ginobili got hurt and was out, but you can’t say it was for lack of Popovich foreseeing the possibility and trying to avoid it. Most coaches would scoff at sitting four-fifths of its starting lineup for an entire game and the league surely would. Arguments would be made about shortchanging the fans and disrespecting your opponents but Pop didn’t bat an eye. 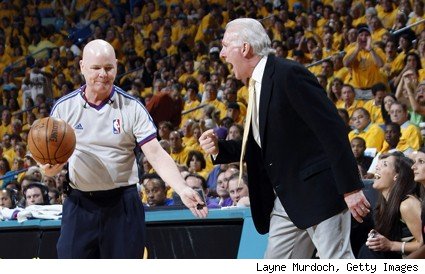 Pop is an incredible wizard at setting up plays. Conversely, he can see through an opposing team’s plays like no other coach around. I feel Coach K may be Pop’s only equal at managing in-game efficiency. The San Antonio offense operates like a machine. At its height Manu and Tony are like pistons pumping in and out of the paint at regular intervals. Tim Duncan is the foundation that holds it all together. Jacque Vaughn was like the wrench that was mistakenly dropped into the gears and broke everything. Everyone has a role and a function that helps complete the machine. They’re kinda like a 1972 Ford Bronco. It wasn’t really a pretty car, and at times it didn’t have a lot of flash, but it always started and got the job done. Okay, enough of the machine/car analogy.

Pop’s inbounds plays are some of the best in the league. In game, our turnover rate is spectacular. The constant mantra when playing the Spurs is that we won’t beat ourselves, you have to beat us. Even last season, when our wings and bigs were frequently being out-athleticized and we know we have to play a perfect game just to have a chance we can always cling to the hope that if any team in the league exists that might play a perfect game, it will be the San Antonio Spurs.

The criticism of Popovich is well known. He can’t develop players. He lacks foresight in team development. He undervalues athleticism and values experience at the expense of talent and athleticism. Despite these shortcoming one thing you can’t question is his basketball philosophy. I may not understand everything about the man, but I know he has an incredibly consistent approach that I will attempt to sum up in 5 tenants.

I'll leave you with this video:

Tune in next time for a fine ’21 Merlot with full-bodied and complex structure, a splash of plum and shiraz, and just a hint of oak