Get To Know Your New San Antonio Spurs #7: Keith Bogans

Share All sharing options for: Get To Know Your New San Antonio Spurs #7: Keith Bogans

After months of making moves, the Spurs' roster is complete. More than complete, actually - somebody's going to be gone by the end of training camp. Why wasn't it complete before? Because we didn't have this guy: 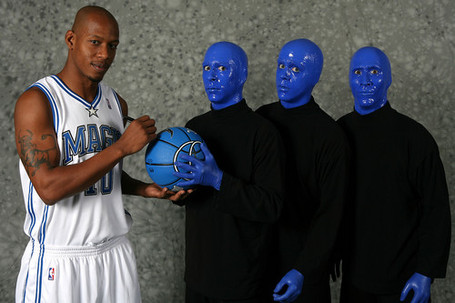 In a bizarre accident, three men and a basketball fell into a 10,000 gallon vat of toilet bowl cleaner near Orlando this week. However, Magic "star" Keith Bogans has generously signed his autograph on the ball as a gesture of good will.

Let's get to know him a little better, after the jump.

We'll start with Bogans' early playing days. Keith played basketball at various Boys and Girls clubs in the Washington, DC area, earning quite a reputation for himself even at the tender age of 11. He then played AAU ball for DC Assault, which has quite the history of success. After all the notoriety he gained in those exploits, the newest Spur was invited to play his high school ball at one of the country's best schools for athletics: DeMatha Catholic High School in Maryland. While at DeMatha, he played for the first high school coach ever inducted into the basketball hall of fame, a man named Morgan Wootten. Keith credits the Wootten and the DeMatha program for teaching him fundamentals. From Bucks.com: [Information for this story was heavily borrowed from that same Bucks.com article]

"At DeMatha, Coach Wootten basically taught me the fundamentals of basketball," Bogans said. "He took a lot of the 'hot-dogging,' as he used to call it, out of my game and just showed me how to just play basic basketball and play tough."

Spoken like a guy who got "over himself" a long time ago - Pop just loves these kind of players. Being taught to concentrate on the fundamentals of the game at an early point in his life also ended working out pretty well for him, as he was a consensus All-American and even ranked as the #2 high school hoops prospect in the nation during his senior year. Even before that, he drew attention from most of the top College hoops program in the country, and would have his choice of schools to play for. 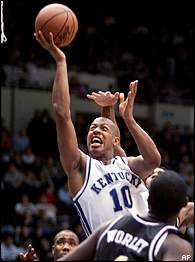 The Iceman cometh not.

Bogans chose Kentucky, one year removed from their 1998 NCAA Championship, as the place to play his college ball. Keith stayed at Kentucky for a full 4 years, becoming one of the team's most solid players in his senior year. Kentucky ran roughshod over the SEC that year, before having their dreams shattered in the Elite 8 round of the NCAA tournament by a Marquette team featuring Travis Deiner, Steve Novak, and some guy named Dwyane Wade[who I hear is a pretty good player, despite his mother's apparent dyslexia].

After that, Bogans became the journeyman that he is known as today. I'll let his DraftExpress stats page tell the NBA story:

Just a note on an odd trend in these statistics: look at his FT% and FG% over the last 2 seasons - they're going in opposite directions. That aside, it's pretty obvious that Bogans isn't going to be doing much of anything that shows up in the stat sheet. Still, the things Bruce Bowen did never showed up on the stat sheets, but he certainly wasn't any less effective. 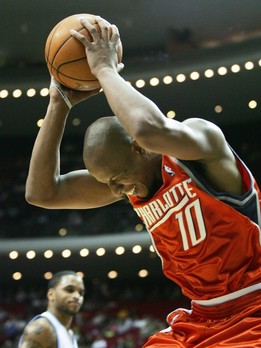 Yeah, I'd feel that way if I played for Charlotte too.

KeiBo (In my head it rhymes with Tae-Bo) was drafted by Milwaukee at #44 back in 2003, but ended up playing for Orlando that season. Never impressive on the offensive end, Bogans nevertheless hasn't had any trouble getting jobs in the NBA. After that first year in Orlando, he played for Charlotte, then Houston, then Orlando again, before finally being traded back to the team that drafted him last year mid-season. In Milwaukee, he got to know one of his new Spurs' teammates a little better, playing alongside Richard Jefferson during the second half of the season(see photo below). But after scouring the internet, it seems as if nobody knows a vital piece of information about their chemistry: nobody can say for sure whether Keith called RJ "Princess Peanut" while they were teammates in Milwaukee last season, which could be troubling for team chemistry.

The "D" Word, And Filling Some Big Shoes

After the disastrous first-round playoff series that saw the Spurs begin their offseason far too early, many of us here were hoping that the front office would make changes to shore up the team's defense. Richard Jefferson, despite being a better option on that end than Michael Finley, didn't exactly make me feel much better about the Spurs' team defense. Antonio McDyess was a massive improvement over Matt Bonner, but perimeter defense was still a problem. Marcus Haislip and Theo Ratliff were decent moves, but the concerns about perimeter defense remained. After having almost a full week to think about it, this last move the Spurs made has finally put my mind somewhat at ease. This signing was a bit of a shock at first, but the more thought one puts into it, the more sense it makes. 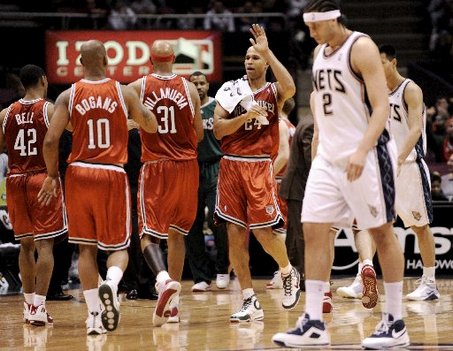 By now, all of us are well aware of the fact that the Spurs' team defense suffered a lot a bit last year. The Spurs simply didn't have the personnel to make beautiful things happen on that end as they have in years past. This has a lot to do with the fact that Pop was forced to give Roger Mason, Finley, and Bonner a lot more minutes than they should have been getting. We've given Pop a lot of grief for this, but there's not really much else he could do with the personnel that was available. Bruce Bowen was a shadow of himself, and it quickly became obvious that the Spurs' defense was simply not up to snuff anymore. OK, so it wasn't terrible - but guess who was more efficient than the Spurs on defense? Only two teams in the West were better on D than the Spurs - the Rockets and (BE style) L*kers. Needless to say, the Spurs had some catching up to do.

Because Bogans' job will primarily be to defend opposing guards, rather than supply any reliable offensive contributions, he's been compared to Bruce recently, both here and on several other Spurs fan sites. Let's get something straight here: Bogans is not going to be markedly better than Bowen on the offensive end - just check his stats up above and be thoroughly unimpressed. He also won't be as versatile on the defensive end, though he is excellent in man-to-man situations(as opposed to Manu, who is excellent at reading the passing lanes and providing timely help defense). So, what's the point? This signing is about filling a niche role for the Spurs when they want to protect a lead. And about getting a tough, physical wing defender slightly above the level of Ime Udoka, who hopefully won't clang 2/3 of his shots. From talking to some friends of mine who are hardcore Magic fans, that seems like exactly what the Spurs are getting.

No ability on offense, you say? Just don't let your guard down around him.

Unlike Bruce or Ubricka, Bogans plays SG almost exclusively(he's only 6'5") - This means that he's going to be sitting on the bench a lot, while Manu and Roger get most of the minutes. However, when the Spurs want to protect a lead while the starters catch a breather - say, the end of the 3rd quarter and start of the 4th - Pop can turn to Bogans to go out there and make it harder for guys like Brandon Roy to do whatever they want. In fact, a defensive backcourt of George Hill and Bogans could cause nightmares for their opponents with their tenacity and freakish length(Bogans' wingspan is 6'9.25"), with RJ playing SF during that time to provide the offense. RJ is also a very good man-to-man defender, which gives the Spurs more flexibility to lock down the opposition than ever before. The combined effect of Bogans and RJ on the defensive side of things might just be enough to replace Bowen's incredible lockdown ability.

Between the additions of McDyess, Bogans and RJ, the Spurs have addressed last season's defensive weaknesses in pretty convincing fashion. Add Manu, Hill, Tim Duncan, and Theo Ratliff to the mix, and this has the potential to be one of the best defensive squads the franchise has ever had. Any defense from Haislip, Blair or Mahinmi will simply be a great bonus. My only hope is that the coaching staff puts a laser focus on defense from the very start of training camp. That's what the L*kers did last year, and we all saw how that ended.

Previous articles in this series:

This is the last of these articles until we know if Malik Hairston, James Gist, or any other relative newbies will actually be on the Spurs' roster this season. On that note - training camp starts on Wednesday, with media day on Tuesday. I'm so pumped I can't stand it.