WNBA Silver Stars Season Wrap-up: There Is No FSM

Share All sharing options for: WNBA Silver Stars Season Wrap-up: There Is No FSM 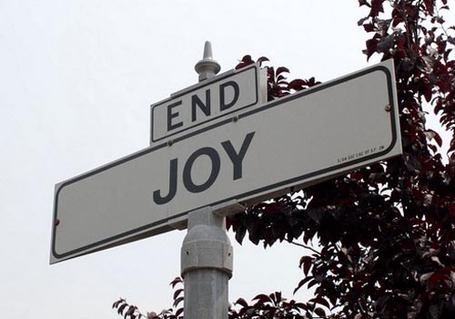 This post is overdue. I apologize, but after a painful loss like Monday's I needed some time to process it, put things in perspective, tell myself that "it's just a silly game".

For those of you that missed the memo, the Silver Stars lost to the Mercury in the third game of the best-of-three Western Conference Semifinals, and thus their season is now over. Finished. Finito. Those who joined me during our game thread know that it was an incredible game, and that our gals fought valiantly. It was anybody's game up to the last two minutes, and they matched what's arguably the best team in the league these days.

I'm sure they even managed to help some of the regulars shake off their seemingly implacable offseason sopor. Or at least I hope so. They accomplished far more with me.

Let's say goodbye, see you in 8 longs months - after the jump. 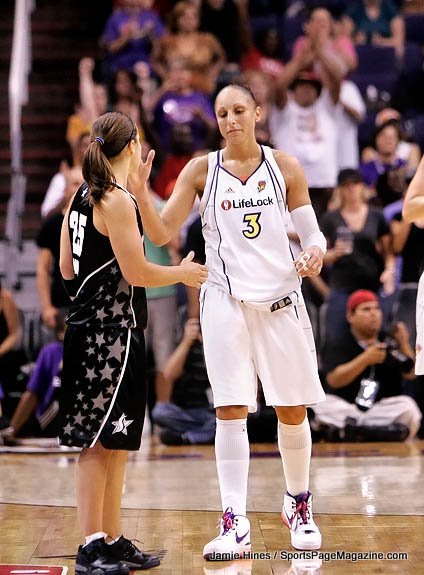 See you next year
(Photo by SportsPageMagazine) 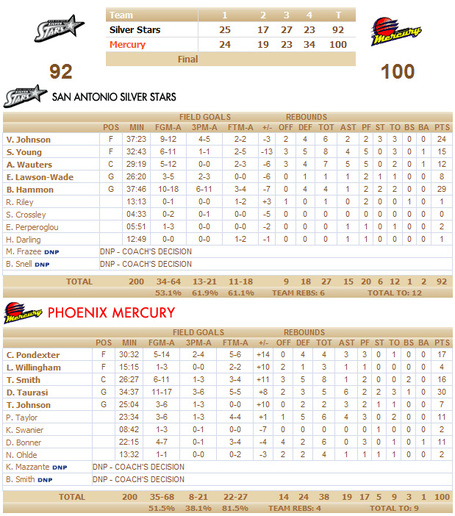 This was a stupendous game, and if you missed it you did yourself a major disservice. I won't waste your time trying to write a semi-professional recap - instead, I'll just point you to Phoenix Stan's and focus on other things.

Basically, the Stars were close throughout the first half, finished the third quarter ahead by three points after a spectacular quarter, and then weren't able to stop the Mercury's run midway through the fourth. Down 10 points, we were ready to call it a night, but the Stars didn't give up and pulled within five with two minutes left. Then Taylor made a layup, darn her pretty face, and that was it.

As I said, it truly was a wonderful game. A tense, competitive affair that kept us (me) on the edge of our (my) seats. I'm sure that whoever started paying attention to this league during the playoffs has quickly learnt to appreciate it. Amazing is happening in the WNBA Playoffs. Vickie Johnson, playing in her last game as a professional, was arguably the most efficient player on the court. What more can you ask from this woman? She helped put the Stars in the playoffs when the odds were leaning against us, then she stepped it up in this short and unforgiving three-game series with the team that had the best regular season record. Hammon kept on firing and making triples and plays, and it was one of her long bombs that got her team 5 points away from one of those sports miracles we spend our lives looking for. Sophia didn't dominate like in game 1, but she was good, damn good. Ann's run-of-the-mill game was better than what 70% of this league can produce... Our starters played well enough for us to win.

Unfortunately, amazing also happened for the Mercury. Pondexter got her points, despite a bad shooting night, and Smith and Taylor thrust several timely daggers into our silver and white hearts. Bonner, oh boy - the best thing I can say about her is that she was as un-Matt Bonner-like as she could be. She's a star in the making, and Stan is probably salivating at the thought of being able to cheer for her for many years to come. But as good as Bonner can potentially become, that's how good Diana Taurasi is right now - the WNBA's MVP. You could say that she won the game for the Mercury. She definitely had help, but you could say that and I wouldn't look at you oddly. 30 points on 17 shots and 6 assists mean that she had a part in a bit less than half of her team's points. She's in a league of her own right now, and I'm glad she was the one that beat us. Now kick some Sparks butt, lady.

Ultimately, as Stan likes to say, the Mercury just had too many talent. It's a constant in sports that more talent almost always trumps less talent, and even a hack like me has to admit that the Mercury's bench is light years beyond ours. Taylor and Bonner were fundamental in that fourth quarter run, and we had no answers in our role players. I wish Snell and Frazee had gotten a chance, but it's too late now. The Mercury won, and it was fair.

What's in store for the Silver Stars next year? I wish I knew. The WNBA offseason is nearly three times as long as the NBA's, and both Vickie Johnson and Erin Perperoglou are retiring. I don't know how much teams evolve from year to year in the WNBA, but contracts are short so I expect to see plenty of new faces around our Big Three. I'm confident that with the right role players those three special players can win that elusive ring.

Whatever happens, I will probably be paying attention from day 1. Driving the bandwagon, as Hipuks would say. I hope some of you will also consider the Silver Stars a valid way to wind down from our championship celebrations. These gals proved that they deserve your support.

3rd - Sophia Young: What a player. Consistent and skilled are the words that come to my mind when I think of Sophia. I don't remember her ever scoring fewer than 13 or 14 points this season - I'm sure it happened, but I don't remember it. If she learns to keep her focus on defense to grab more rebounds, she could become an MVP-type star for this league - and she's pretty close to it as it is.

2nd - Becky Hammon: Yeah, she's cute. Beautiful, I'd say. But that's secondary to her skill, and her leadership. I've said it before, but the Stars often go only as far as Becky takes them, and as pissed off as I was when she missed those gimmie layups, she kept fighting and making those beautiful threes rain down on her foes. (Hmm. I wonder if she'd add me to her Facebook friends list...) Seriously, though, it's a pleasure to watch her play. I hope she keeps on playing for many, many years.

1st - Vickie Johnson: Epic, larger-than-life, arresting. My English vocabulary is unfortunately lacking, and I can't think of a way to describe her performance on Monday's game. 9-12 from the field, 4-5 from three, 6 rebounds, 2 assists, 3 steals and 24 points, three points fewer than her career-high. On her last game as a pro. A do-or-die elimination game versus the best team in the league. I'll miss her - I wish I had seen her play during her prime. Check out what she had to say after the game (once again, courtesy of Phoenix Stan).

Wrapping up the Wrap-up

Becky Hammon, Sophia Young, Vickie Johnson, Ann Wauters, Diana Taurasi, Cappie Pondexter, DeWanna Bonner. Those are 7 players I would pay to watch play - if I could. I'm serious, guys, and especially considering the ridiculous prices tickets are being sold at these days.

I started watching the WNBA this offseason because of some sort of post-Mavs-loss depression. I found myself with lots of basketball fandom to give and no viable targets. Enter the San Antonio Silver Stars, a team I could pick without much thought, just because of its flimsy ties with my beloved Spurs. Now, I'm not an NCAA fan - the game is convoluted, messy, and I'm convinced its appeal is based solely on the direct-elimination format and the gambling opportunities it creates. I approached the WNBA unbiased but unenthusiastically, and the first few oh-so-ugly games certainly didn't help. I have to credit Stan's articles for my perseverance, because eventually my mind shifted pattens and I started to appreciate the incredible skill of the chosen ones, the stars, the Hammons and the Taurasis.

Basketball is basketball, guys, and the bottom line is that I'm a fan of basketball first, and the NBA second. If the NBA didn't exist I'd be watching my neighbors play pick-up ball, or play 2K9 online. The WNBA is good basketball, and its players are skilled professionals. Period. I love dunks just as much as the guy next door (in fact, I probably love them more) but they are not the be-all and end-all of the game. Basketball existed before Wilt started slamming it down, and if you can't accept that women simply play differently, then you'll never be able to enjoy a WNBA game. (Whether they should try to incorporate above-the-rim play into the league somehow is another discussion altogether.) And the playoffs, guys, were nearly as exciting as the NBA's. Through this intense series I managed to care for the fate of our team, and that's something that every fan can enjoy.

I'm sure what this league can do to improve its ratings and gain the popularity it both deserves and needs to survive. More knowledgeable minds might have the answer. What I do know is that next year there will be at least one more fan that cares.

I just want to say thanks to all of you who joined me during the game threads, and Mark, for writing game 2's thread. If you want to read more about the WNBA, remember to check out Swish Appeal, the blog managed by Phoenix Stan and Q McCall. They're both great writers and completely on fire lately, writing like madmen as the playoffs gather momentum. If you're interested, join and drop them a comment or 10.