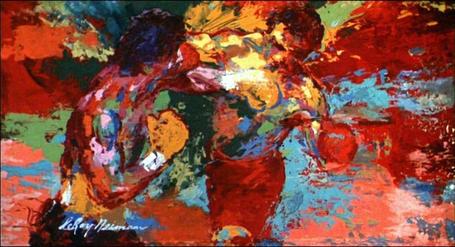 There will be time in the offseason for recriminations regarding our horrendous loss to the Mercury on Saturday. We will point fingers, assign blame and generally act like any other basketball fan online (bloggers will be bloggers). This is not the time, though - the simple truth is that the series is now tied at 1-1, and both teams will play tonight facing the possible end of their 2009 season.. And we have yet to see which team will land the last punch.

A proper recap of game 2 to read while we prepare for what could be the Mercury's last game of the season, after the jump. 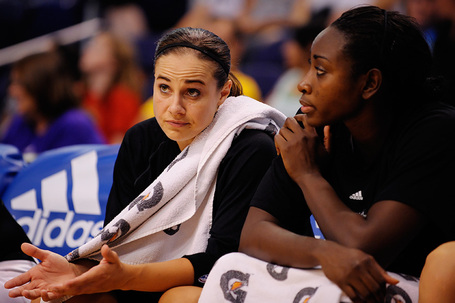 Before I forget, the photo above was taken by Max Simbron. You can find a complete gallery of his great photos in this post by Stan over at Swish Appeal. I just picked one that I felt represented our night perfectly. 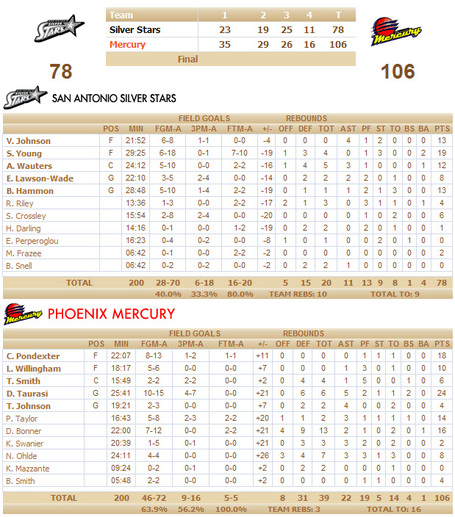 This is the kind of game that could drive a blogger to drinking.

First of all, go read Stan's recap because he makes a ton of good points. I'll focus on the Silver Stars, because that's what I know (sort of) and my teacher always told me that you should write about what you know. (Which is why next week I'm going to entertain you with a 10-page dissertation on on hydroelectric dams and how they relate to NBA basketball.) Pay attention to his explanation of the Mercury's defensive changes through the game, which went completely over my head.

Phoenix won this game in just about every aspect of this game: defense, offense, boards, assists (and yes, points, by a big margin). But the most worrisome stat, in my mind, is the one battle we won: the free throw battle. We shot 20 to their 5, and they had 6 more fouls tallied. In my mind this confirms what my eyes saw during the game: the Mercury were the aggressors, the team unwilling to give its opponent easy points or layups. It's a reflection of our seemingly lackadaisical attitude towards what was one of the most important games of the season.

But since I don't want this recap it to be one long-winded cliché, let's see what went wrong:

I could go on and on, but there's no point. Anyone that read my recaps through the last 10 games of the regular season know what the Stars' main flaws are, and there's probably no time to change now. We just need to tighten up our defense, look for the open shooter and grab rebounds. Basketball 101, but certainly not quite as easy as it sounds. If the Mercury cool off a little and Becky gets hot from deep, we can take them to their limit - I know we can.

Or maybe there is actually time to try something new? Why are Snell and Frazee buried so deep in the bench? They have worked well against the Mercury in the past, and definitely deserve more shots than Perperoglou. Snell's absence from the rotation is particularly puzzling... I wonder if there's an injury I'm not aware of, because she's one of the only 5 Stars able to create her own shot.

Your one (Silver) star

One and only - Vickie Johnson: At least one Silver Star is not ready for her season to end - on in Vickie's case, her career. It breaks my heart that the Stars couldn't build a proper team around this wily veteran, who showed more guts on Saturday than all of her teammates combined. 13 points, 6-8 from the field, 1-1 from three, 4 assists, 2 steals, no turnovers. This was the line that we needed from her, and she delivered.

So much for this recap. Let's see what kind of hack preview I can put up for the game thread.