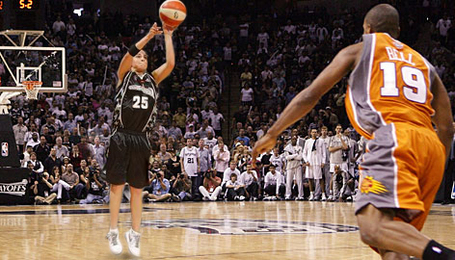 Not quite equal shock value

Have you ever wondered what's the difference between a good blogger and a hack? Well, with the start of the WNBA playoffs just around the corner, a good blogger -like Bright Side of the Sun's Phoenix Stan- would write a thorough preview with so many Xs and Os that Pop would probably look at it and collapse from information overload. On the other hand, a hack would simply use his time to 'chop Becky Hammon into a photo of Timmy's famous dagger.

Can you blame me, though?

Your preview, after the jump. 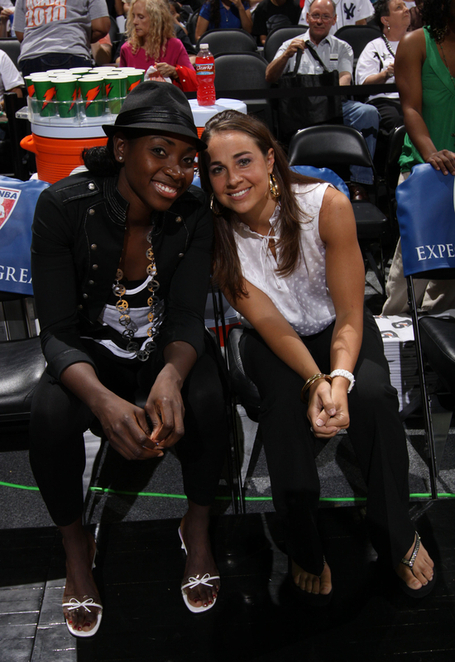 What Went On Before

Those of you paying attention might've noticed that I failed to recap the very last game of the Silver Stars's regular season, at home versus Seattle. Well, I'm sorry, but it's simply not worth it. Everything I've read and seen about that game suggests that it was a travesty of the highest order. Our full lineup, minus Becky and Sophia, were ran out of the arena by a Seattle team that was missing three starters (Sue Bird, Lauren Jackson and Swin Cash).

HotForHammon, one of Silver Star Nation's admin, went to the game, and she had this to say:

All I can say is you guys are lucky you didn't have to sit through that pathetic excuse for a basketball game. It was like watching a high school game, they were so bad. I felt like leaving after the 1st Q. When I say bad I mean BAD! I don't think I have ever seen such awful basketball...EVER!!! If this would have been my first Silver Stars experience I would have asked for my money back and would never return. 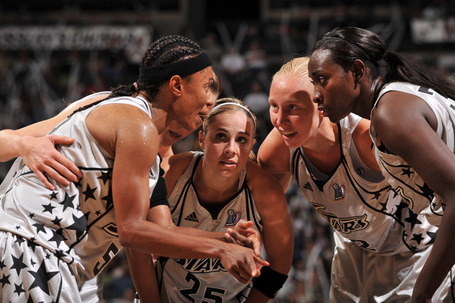 Gonna need some of that this year, too...

Just like the guys, these teams have a history of recent playoffs series: namely, the 2007 Western Conference Finals. Unfortunaly, that's as far as the comparison goes, because the Mercury took that series 2-0 and went on to win the WNBA title. It's a testament to how up-and-down this league can be that the Mercury missed the playoffs last season, and now they're back at the top of the league. A couple of stars and good role players will take you far in a small league like this one.

In 2007, that star was, for the Mercury, Cappie Pondexter. She was without a doubt the series' MVP, averaging 29.5 PPG, 7.0 APG and 8.5 RPG. This season she was once again one of the top players of the league, and isn't part of the MVP discussion only because she plays with Diana Taurasi, the likely MVP. Talent runs deep in Phoenix this year...

Just in case you haven't been paying attention and are just not jumping onto the battered, rusty bandwagon, the Phoenix Mercury had the best regular season record in the league with a respectable 23-11 record, which Stan points out is a .676 winning percentage that translates to a 55 win NBA 82 game season. As I said, respectable, but not particularly dominating. Then again, the Stars were two wins below .500, so I shouldn't be pointing any fingers.

Bottom line is, the Mercury are the team to beat this year, and if the Silver Stars want to win the championship, they have to beat the best.

Did you know that the WNBA has 3-game series in the semifinals? I sure did!

Bench: This is where it gets ugly. DeWanna Bonner (yes, I said "Bonner") is a popular pick for both the Rookie of the Year and the Sixth Woman of the Year awards, and that's just the tip of an iceberg that has three or four productive bench players that could easily start for the Silver Stars. Our gals will depend on what Belinda Snell (who was a member of Phoenix's 2007 championship team, interestingly enough), Ruth Riley and the suddenly revitalized Shanna Crossley can do, but don't hold your breath.

Tuesday, June 23, AT&T Center. San Antonio, TX: Silver Stars 91, Mercury 87 | Box score | Highlights
Phoenix Leaders: Cappie Pondexter (26 pts., 6 reb.), Diana Taurasi (22 pts., 8 reb.)
San Antonio Leaders: Belinda Snell (21 pts.), Becky Hammon (19 pts., 5 reb.)
Recap: See? We can win. All it took was a career high from Belinda and another good shoring from Ruth. It was a battle throughout the game, though, and we only pulled away thanks to a timely triple by the wonderful Becky Hammon.

Thursday, August 11, US Airways Center. Phoenix, AZ: Mercury 95, Silver Stars 83 | Box score
San Antonio Leaders: Diana Taurasi (29 pts., 6 reb., 6 ast.), Cappie Pondexter (19 pts.)
Phoenix Leaders: Sophia Young (29 pts., 8 reb.), Ann Wauters (12 pts., 10 reb.)
Recap: The first game between these teams featuring Ann Wauters, who joined us on August 1st. And the first that had a classic San Antonio 3rd Quarter From Hell (tm). If you're looking for reasons we lost this game, look no further than Becky's 2-12 FG showing. On the plus side, Sophia had a stellar night, and nearly kept us in the game by herself.

I'm not about to turn lead into gold by writing it into submission (that didn't make sense, did it?) in this section, but I thought it would be useful to recap what stars need to align for us to have a chance of winning this series:

Last but not least, I'd like to point out that this is a 3-game series. Just imagine how many upsets we would have in the NBA playoffs with this kind of system. I'm a firm believer than in the NBA, any team can beat any team on any given night. And that's even truer in the WNBA, where the top teams have prosaic records and are given to slumps in their performance. If we win tomorrow at San Antonio, the Mercury will face two do-or-die games at home under considerable pressure. Make no mistake, folks: we have a good chance.

My prediction? My heart says Stars 2-1, but my brain says Mercury 2-1, with Phoenix winning both home games.


A Pic Is Worth

This is my pictorial interpretation of this series.