The endless summer for the French mens basketball team continues. The team is undefeated thus far in tournament play, which is actually quite surprising, given their history of choking. 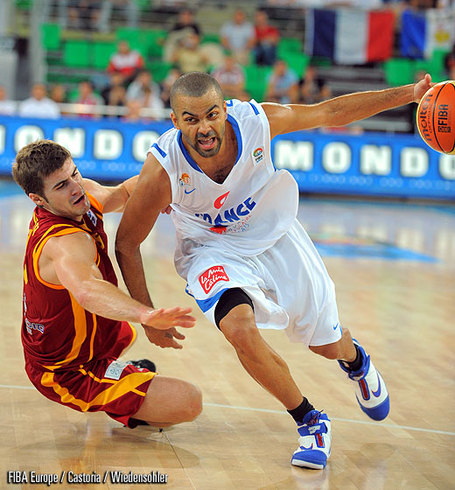 We're going to be concentrating on players who are associated with the Spurs, obviously. Follow me beyond the jump for more Eurobasket than you can shake a Bourousis at.

In the first game of the tournament, team France took on the Germans and didn't look very sharp. Les Bleus trailed for most of this game, but the French fought to gain the lead in the second half before Tony Parker made France's final 11 points, including his only 3-point make(1-7) of the night to escape with the victory. Notable non-Spurs included Rony Turiaf(15 points, 14 rebounds, 3 blocks) and Nicolas Batum(12 points, 8 rebounds). Also of note, Dirk Nowitzki and Chris Kaman are not playing for Germany this summer, just in case you thought this game was supposed to be so close.

France's second game looked a lot like their first one, although Latvia was actually a better team than the depleted Germans. France struggled to keep up for most of the game, and they were even behind by double digits in the third quarter, before Parker took the game over. Tony was the only starter in double figures, scoring 21 points in the second half and helping the French clamp down on defense(Yes, I was shocked too) to hold the Lithuanians to 33% shooting on the game. Non-spurs of interest included Ali Traore(12 points, 2 rebounds), Nic Batum(7 points, 8 rebounds, 3 assists) and Boris Diaw(6 points, 5 assists, 4 rebounds). However, almost everyone outside of Parker was an afterthought in this one. 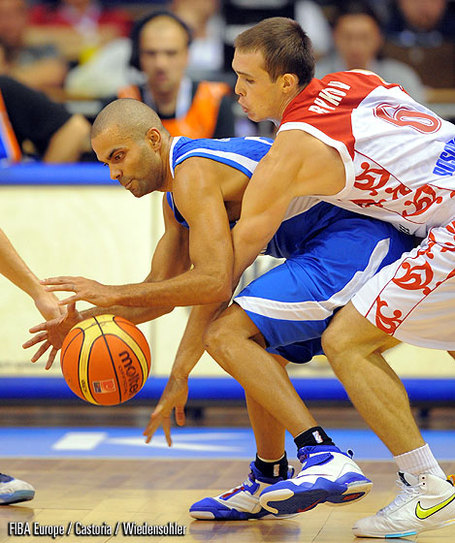 This result was somewhat shocking to me. The last time Eurobasket was held, Russia took home the gold over the same Spanish team that gave the US so much trouble in the Beijing Olympics' final game. Also, from the results of the previous two games France played, it seemed as if Tony was the only hope for Les Bleus to go anywhere in this tournament, and Tony was definitely not the star in this one. The French were behind for a good chunk of this game, just like the previous two, but took the lead in the second half and never gave it up again. Russia tied the game early in the 4th, but the French played great defense down the stretch again to seal the deal. The top two players for France in this game were Rony Turiaf(18 points, 14 rebounds, 1 block) and Boris Diaw(19 points, 7 rebounds, 7 assists).

In this game, France actually looked like an undefeated team. They started on a 17-3 run, and closed the first quarter up 24-9. They didn't look back from there, focused on moving on to the next round. Macedonia was considered the weakest team in the group, so this victory wasn't unexpected. What was unexpected is just how thoroughly the French dominated the game, right from the tip. Les Bleus secured a quarterfinal spot with this win, and are playing for seeding in their next two matchups. Non-Spurs who stood out included Nic Batum(13 points, 5 rebounds, 1 block), Florent Pietrus(14 points, 1 rebound, 1 assist), and Ali Traore(13 points, 6 rebounds, 2 steals).

Some Notes on French Play

Ian Mahinmi - John Mason suffered a hip contusion in the first game for France, but against some of the smaller teams, they haven't missed him. Ian was cleared to play two games ago, but the coaching staff has been giving him extra time to rest the injury. However, he might be needed soon, as the French have a game coming up against a powerful Greek national team.

Rebounding - The French have actually enjoyed a huge advantage on the board in all but one of their games so far. While this is definitely a good sign for them, they don't possess the height usually required to sustain such an advantage. This is where Ian might prove to be useful, but as mentioned before, the French haven't needed him so far. 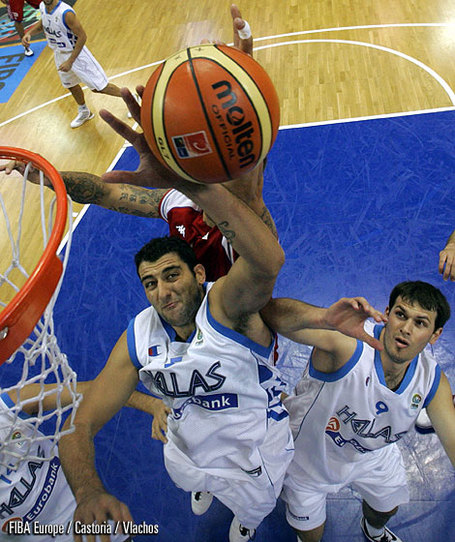 Really? The Spurs wanted this goofy looking dude on the team?

France v. Croatia || 09/13/2009: 2:00PM Spurs time
This one is today, people. The French should be able to handle Croatia, but it may be time for a letdown game. The Croatians gave Russia all they could handle in their last outing, so Tony & friends can't afford to be caught looking ahead to the next matchup.

France v. Greece || 09/15/2009: 1:15PM Spurs time
Greece is consistently one of the best teams not only on the continent, but in the world. This will definitely be a big test for the French. The Greeks, like France, are currently undefeated in group play, and have looked every bit the dominant superpower that they historically are in Eurobasket. It's extremely hard to imagine the French having a big rebound advantage over Bourousis and company, so they will have to shoot very well, which will not be an easy task against a team that plays together much more often than they do. It's not impossible, but don't hold your breath waiting for France to win this one.

After the game against Greece, the "playoffs" will begin with quarterfinal games on Thursday and Friday, followed by the semifinals on Saturday and final games on Sunday. Is it wrong to pay so much attention to Eurobasket? Well if so, I don't care, because the offseason is just too long and boring this year. But hey, training camp starts at the end of the month. Until then, let's all wish the French national squad some good luck, especially with injuries.