Stars @ Monarchs Recap, Or Why The Silver Stars Are In The Playoffs

Share All sharing options for: Stars @ Monarchs Recap, Or Why The Silver Stars Are In The Playoffs 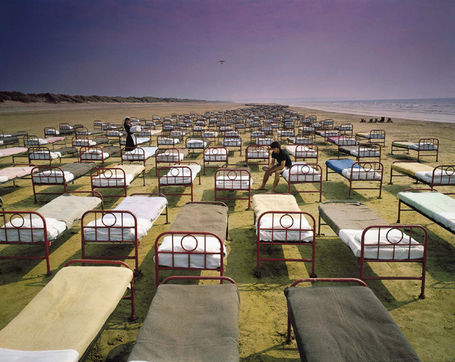 A momentary lapse of victory
Yup, guys, you read that right. We won, they lost (thanks to 19 points from Lisa Leslie, in her last regular season game at home), we have the tie-breaker, so finally, we're in the playoffs. Our opponent? None other than the team with the best record in the league, the Phoenix Mercury.
There will be time to talk about matchups, last-minute tune-ups and whether the Silver Stars have a chance of pulling off an upset. In the meantime, just think of how sweet it would be to take Phoenix out of the playoffs once more. Stan might spontaneously combust.
Next-to-last hack recap of the regular season, after the jump. 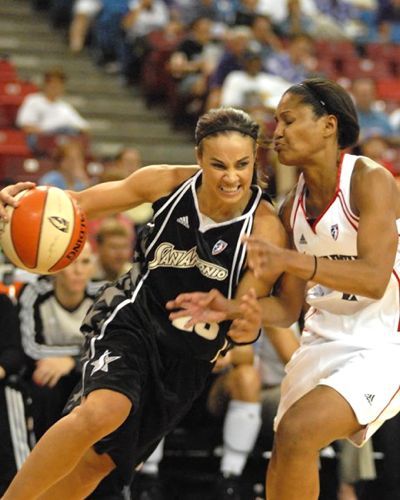 See, Tony? That's what you should look like for me to appreciate you more...
(Photo by George Young, from SportsPageMagazine) 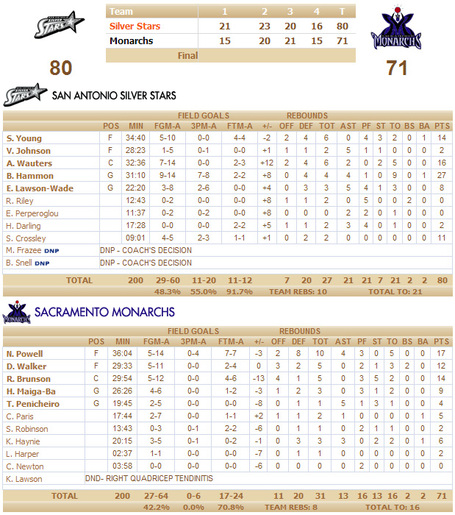 Basically, we clinched the last playoff spot in the West by being completely predictable: as it has been the case for the Silver Stars ever since I started watching them play (and actually paid attention to the players not named Becky), they lived and died by the play of their Big Three. (Thankfully, in the WNBA, three great players is enough to get you to the playoffs.)

I'm honestly worry about the pedestrian production from our girls in what was arguably their most important game of the season. If the WNBA logic resembles at all the NBA's, then winning the battle of the boards is key for a championship team, and depending on your accuracy from beyond the arc to win games is fool's gold. Only a couple of weeks ago we lost against this limited Monarchs team because that shot wasn't falling, and not many of our players seems able to take it to the hole when things go wrong. (Maybe Many should've played basketball?)

Admiral_Needa from the Silver Stars Nation Forum was at the game and has some insight that gives me some hope:

For the first ~2.5 quarters, SAC was manhandling SASS down low, but SASS' shooters, mainly Becky, kept the score in their favor. Then in the 3rd, SAC made a run, cutting the SASS lead to just 6, and after Walker got a rebound off of a missed SAC Free Throw and scored the chip shot (the 2nd time it happened in the game), Dan Hughes went ballistic. He called a time out and was screaming so loud I could hear him from my seat. In the huddle, Hughes was angrily pointing left, right and down, etc., talking about boxing out and playing defense. Then, the bottom dropped out for SAC. No doubt Hughes' pep talk must have helped. Not only were the outside shots falling as they were earlier, but now the inside game was working as well. SAC no longer controlled the paint.

If Hughes manages to motivate his players into maintaining the defensive intensity they showed in that fourth quarter throughout an entire game, then we have a chance against Phoenix. Thing is, I just haven't seen them play a whole game on both sides of the court ever since the first game of the season I watched - ironically enough, a rout versus Phoenix.

The game was pretty much as Needa described it: the Monarchs got their points in the paint, but efficiently, and on the other end Becky was spectacular from deep, hitting 7 out of 8 triples. We're not going to lose many games when she's shooting that well. It was great to see, and makes me want to talk Pop into giving her a try as our 3rd PG. (Then again, considering how much she's turning over the ball lately, Pop would probably bench her for the whole year, the offseason and training camp.)

So we won, and live to die another day. I'm happy. Are you?

Your one (Silver) stars

Honorary mention - Shanna Crossley: She might not have been our best player, or our third best for that matter, but damn if it's not a happy sight to see Crossley have two straight great games. I've said it before, but in the playoffs we're only going to go as far as our role players take us. Shooting 4-5 from the field (2-3 from three) for 11 points could be huge in the playoffs for us, and it's nice to see our cold-blooded sharpshooter warming up.

2nd - Ann Wauters: I don't know what's up with Ann's turnovers. The gals at Silver Stars Nation say she's out of shape, because she only played half a season, but at this point they're the only blemish on a great, consistent player. 16 and 6 from our skilled center.

1st - Becky Hammon: Oh boy. 9 turnovers. What can I say? Some happened because she was careless with the ball, and some were just bad luck. The thing is, I'd complain more if she didn't also have 27 points and hadn't led the Stars to their biggest win of the season so far. 7-8 from beyond the arc? How ridiculous is that?

So that's that. Let's see what's happening in our last game of the season.