My Team Is Better Than Yours: Memphis Grizzlies Edition

Share All sharing options for: My Team Is Better Than Yours: Memphis Grizzlies Edition

Before I start, I want to say I'm going to be playing with the format a little bit. You're going to see more of a focus on the future and less on last season. I'm going to be trying out some different things over the next couple so leave any suggestions or complaints in the comments. 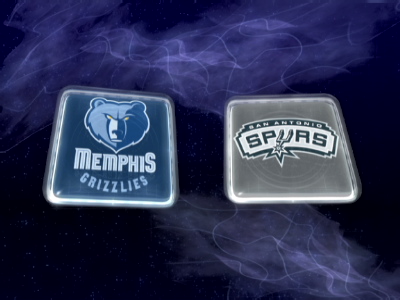 Our team this time is the Grizzlies, and their franchise is in serious trouble. If it is any consolation to Memphis fans, you are the worst team in the best division...Oh, this is going to be rough.

The music choice is all about timing and nothing about Memphis, Grizzlies, Bears, leaving Canada, youth, or putting your faith in the draft. Anchor and Braille (lead singer of Anberlin side project produced by lead singer of Copeland) just released his/their first album yesterday. Here is the best version of any of the songs I could find on youtube. This one isn't bad either.

Last season, they were a poor defensive rebounding team. They rank 28th in defensive boards and 7th in offensive boards given up. Not good. There biggest problem though was their lack of scoring. They scored the second least of any team at 93.9 per game. They were dead last in assists too. LD, my gag reflex is already acting up. I guess they really had a tough debate between drafting a point guard or getting a big with those awful stats. 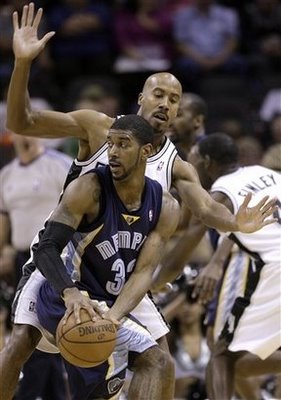 Who will guard this guy next year? Hopefully not Mason or Finley. via 3.bp.blogspot.com

Mon, November 24 @ Memphis We win 94-81. "San Antonio gets boost from Ginobili in win over Memphis"

Three double digit wins and a double overtime win equals four good Spurs games in my book. OJ Mayo scored 26, 32, 29, and 12 in the 4 games for a 24.8 average on 53.2% shooting. Hakim Warrick was their best bench player in the 4 games scoring but wasn't very good on the boards. They shot a combined 14 of 52 from 3 in the 4 games for a measly 26.9%. Kyle Lowry lead them in assists and steals per game against us. They traded him to Houston. 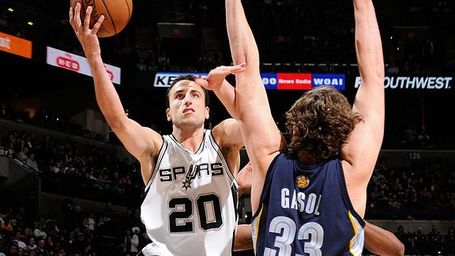 Manu played in all 4 games. Tony only played in 3 and only started for 2 of those. Bruce, Finley and Mason started the games Tony didn't play. Duncan, Parker, and Manu were good as usual. George Hill was excellent. He played 19.5 minutes per game scoring 9 points per. He added 2.8 assists, 1.75 steals, and only .8 TO's. He also had almost 4 FTA's per game which tied Manu.

They drafted three big names in the draft: UCONN's Hasheem Thabeet (2), Missouri's DeMarre Carroll (27), and Pitt's Sam Young (36). They really tried to improve their front court with Thabeet (C) and Carroll (PF). I mentioned the rebounding problems. Thabeet was a good rebounder, 11th or so in college, but he wasn't even the best rebounder in his conference. I think it was some guy from Pitt. Carroll had fair rebounding stats in college, but is a dynamic scorer. Draft Express says he is an NBA PF. ESPN says he is a SF. I'm siding with Draft Express. Sam Young is an athletic SF and was taken one pick before Blair. When he was drafted is when we went crazy in case you don't remember. If Blair had been taken at 36 and we got Young, I probably would have still been excited. He is a good player. If he does not pan out as a good role player then I place the blame for that on Memphis's staff.

The only other player they have added is Zach Randolph. They only started playing last year's rookie Hamed Haddadi after our 4 games with us. He is another center. That puts them at 12 players by my count. They are in serious money troubles and will run at the league minimum of 13 I figure. They need to add a player. I think they desperately need a veteran PG.

*Edit. They signed Marcus Williams (The Evil One). I missed it as both ESPN and NBA.com failed to add it.

PG: Tony Parker versus Mike Conley: Advantage Spurs: Parker just wins this one. Conley isn't as good as people thought he would be or maybe he is...

SG: Roger Mason versus O.J. Mayo: Advantage Grizzlies: O.J. Mayo was likely the runner up to Derrick Rose in last year's rookie of the year votes. He is a serious talent. He scored a lot last season on Mason too. Hill and Manu need to defend him. 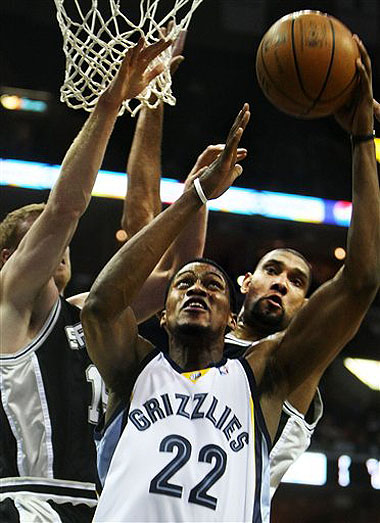 SF: Richard Jefferson versus Rudy Gay: Advantage Spurs: RJ is the better all around player. Gay is super athletic and a descent player, but he lacks consistency. He needs to reduce the number of games he has shooting under 35%. He can hit the 3, but I'd like to see a coach tell him he isn't allowed to shoot it, really force him to put his head down and be aggressive to the goal every time he touches it. He would get more FTA's too. 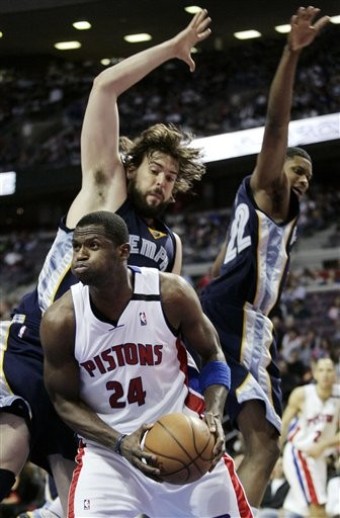 PF: Antonio McDyess versus Zach Randolph: Advantage Spurs: Both players were about the same at about 10 rebounds per game last year. Zach Randolph scores a lot more, but he was playing on the Clippers. McDyess is the better defender and the better team player. 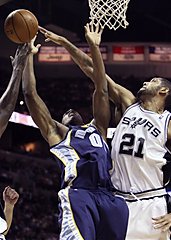 C: Tim Duncan versus Marc Gasol: Advantage Spurs: Not as good as his brother and that means he is even further from the greatness of Tim. He is not quite ready to be handed off to the Lakers yet, but he is very promising.

Point Guard: Hill vs No one....oh not good for Memphis.....*or Marcus Williams. This is actually a really good match up for Hill, but I think Williams won it in Summer League. That is summer league though, and who knows what our coaching staff was asking him to do, especially in that final game.

Wings: Manu, Finley, Hairston, and Williams vs Sam Young, Marko Jaric, and Greg Buckner: I think Manu could beat them 1 on 3 in a halfcourt game. Full court, I'd have to give them the advantage. At least on offense and the glass.

Front Court: Blair, Mahinmi, Bonner, Haislip, and Ratliff vs DeMarre Carroll, Hasheem Thabeet, Hamed Haddadi, and Darrell Arthur: We now what happens when Blair and Thabeet play. We also saw Mahinmi play well against him in Summer League. ATS said, " Ian Mahinmi really played well, or at least aggressively, going after Hasheem Thabeet. Ian had 15 points, 9 rebounds, and 4 blocked shots." Bonner can hit 3's as most of their bigs are young or slow and won't close out. Haislip is probably more athletic than most of their bench. Ratliff will prey on their youth with his timing as well. Memphis, your bigs are really bad, but they have potential. Maybe they will develop into legitimate stars in their next cities, whether they get traded or the team gets moved....

Coaching: Advantage Spurs. It is like Harry Potter and Defense of Dark Arts professors. You have a new one every year like the position is cursed.

Result: Spurs won't drop a single game. It is the division and they will step up to sweep all four games. These will be brutal beatdowns. I expect Manu or Duncan to not even play in these games. Memphis doesn't have any sort of depth and our young players can keep up better. Ratliff and Dice will dominate them in the paint on defense too.

Sat, Jan 16 at Memphis: SEGABABA (first game @ Charlotte) and third game of a four game road trip. Also our 4th game in 5 days. We have a Lakers-@ Thunder back to back before this one.

Fri, Jan 29 vs Memphis: Fifth game of a six game homestand before the RRT.

Fri, Apr 9 vs Memphis: First game of a back to back (SEGABABA is @ Nuggets). Second to last home game and second to last division game. 4th to last game overall.

We play them four times and they are all Friday and Saturday games. Three of them are back to backs so we can definitely rest Duncan or Manu in those games. So that is the Spurs-Grizzlies preview for next season. Next up is the Minnesota Timberwolves.

Past entries in this series: Thunder, Clippers, Wizards and Kings.