Yesterday, silverandblack_davis gave us a great look into Tiago Splitter's contributions to the Brazilian national team in the FIBA Americas tournament. Well, Brazil played again today, this time against Panama. But France also played today, trying to take care of business against Belgium, who beat the French by 4 just yesterday. 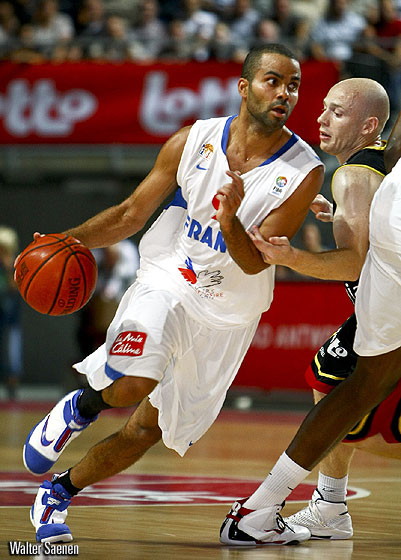 So, four Spurs players or prospects played today. How did they do? Let's take care of the more poignant results first. France utterly dismantled Belgium in the first Spurs-related game of the day. More details on this game, and Brazil v. Panama, after the jump.

Tony Parker had a decent game, but wasn't the best player for France today, which usually doesn't bode well for the French. But today, that honor went to Rony Turiaf, who had 19 points and 9 rebounds on 80% shooting. The French dominated this one from start to finish - and given how many NBA players are on that roster, they should play this well a lot more often.

Now, for the Spurs-related stat lines:

SpurNando has played very well in the qualifying tournament, and Ian has generally done well in the limited minutes he has been given(His limutes may be limited because he was not with the team prior to this summer, but I really don't know). Tony hasn't been quite as dominating as he was with the Spurs last season, but that's actually to be expected in Eurobasket anyway. Which reminds me: with this win, France has qualified for the real Eurobasket tournament. The Eurobasket schedule can be found here. Let's hope that the French do well, and give Ian more minutes. As long as Tony and Ian are healthy, I think most of us want them to play and perform well.

Brazil finished the first round undefeated in the FIBA Americas Tournament, after easily dispatching Panama today. As you might expect, Leandro Barbosa and Andersen Varejao were the top two scorers - netting 17 and 15 points, respectively. However, Spurs prospect Tiago Splitter also had an excellent game. Our favorite Brazilian Argentine showed some good shooting, but there was more than that. Splitter, Barbosa, and Varejao all sat out the 4th quarter because the game was already over at that point.

Tiago has been very steady in this tournament. Nothing flashy(in typical Spurs fashion), but he has quietly been probably the most complete player on both ends for Brazil. He's leading the team in rebounding, third in scoring, and fourth in assists. His videos from Tau show off his passing ability, which is probably the most underrated aspect of his game. He's as good a passer as any big man in the tournament.

Anyhow, it was a good day from a Spurs fan's perspective. Both of the games involving Spurs players turned out well for those players. Interestingly, the two most impressive performances came from the prospects, rather than the current Spurs players. Let's hope that bodes well for the Spurs in the future.