I know you still care even if he ain’t coming this season. The FIBA Americas championship, which started last August 26, is getting little fanfare these days because frankly, Team USA isn’t playing so who cares, right? Well, I care because I love basketball and because I’m bored. And yeah, because I’m still one of the many hopefuls out there wishing on a star that Tiago redeems the Spurs of their Luis Scola fiasco.

Brazil is fielding a very strong team featuring two legit NBA players, and when I say legit I mean they’re significant contributors to an NBA team – Leandro Barbosa of the Phoenix Suns and the original Sideshow Bob Anderson Varejao. Tiago, as we all know, is already an NBA-caliber player with the Spurs owning his rights, so that’s your Big Brazilian Three right there.

The team, however, is lacking in height with Splitter being their tallest player at 6’11’’ and playing center. Andy and Joao Paulo Lopes Batista are both 6’10’’ forwards who can also play spot minutes at the center position along with Tiago, so it’s probably safe to assume that Brazil plays fast to compensate for their height deficiencies. Of course, if you have Barbosa on your team, the team’s overall speed increases like a bajillion times.

Without Team USA in the tournament, Brazil is considered as one of the favorites to win it all and qualify early for the Olympics. Of course, PtR favorite and perennial contender Argentina is also in the mix despite missing the services of the beloved god of sexy, Manu Ginobili, new Wizard and former Spur Fabricio Oberto, and other NBA’ers Andres Nocioni and Carlos Delfino. Dominican Republic is also fielding a strong team led by twitterer extraordinaire Charlie Villanueva-Mejia (Pistons), Al Horford-Reynoso (Hawks) and Francisco Garcia (Kings). Their second last names are well beyond me, so don’t ask. Puerto Rico is also always in the mix with Carlos Arroyo having tons of experience, and Mexico can always spoil the party with Summer League fan favorite and violent person Romel Beck leading the way.

So Far, So Good

As of this writing, Brazil is doing well with a spotless record of 3-0. Leandro Barbosa as expected is leading the team in scoring at 19 points per game. Varejao is providing ample support with 14.3 ppg and 9.3 rpg. Below are some short recaps of Tiago Splitter’s performances in the three games played. Please take note that I haven’t watched any, so I'm just basing and summarizing the reports on the FIBA Americas’ website, for your reading pleazure. Yes, I typed that with a Z for added effect. If somebody watches the actual games, please enlighten us with your basketball expertise. 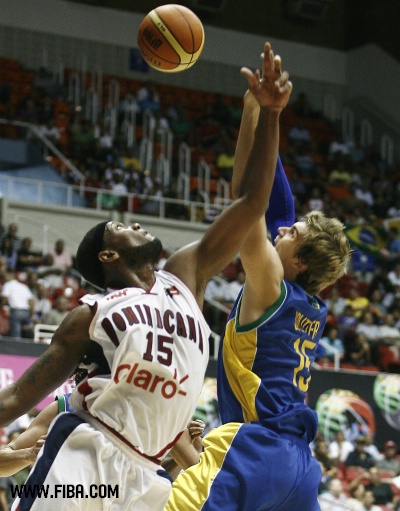 I don't know why, but for me this photo looks like a ballet recital.

Brazil gets off to a terrific start by beating fellow contender Dominican Republic. Tiago plays a good game, scoring 14 points and sharing team-high honors in rebounding with 10, 3 of those on the offensive end. Maybe it’s good to note that he got those 10 boards in 24 foul-plagued minutes, while Varejao got his 10 playing 39 minutes. Strangely, Tiago also had a team-high 3 steals. He also was second in the team with 3 TOs, so that’s not cool but hey, he’s human. And in perfect Spurs fashion, he clunks four out of eight free throws for a 50% clip. Way to go, Tiago!

In the meantime, here are your game highlights, with one part showing Tiago demonstrating some semblance of post moves. I also took particular notice of Alex Garcia, that guard from Brazil who has a weird shooting stroke, kind of like he’s literally shooting from the hip:

Also, if I may shamelessly rip from the game recap of The Painted Area and their Tiago-centric analysis of his game:

Tiago Splitter had to sit long stretches due to fouls, but still was the best all-around player of the game. Splitter gave Horford all types of problems, and was mainly responsible for Horford's foul issues. Splitter finished with 14 pts, 10 rebs (3 off) & 3 stls. The Spurs win again.

Splitter really displayed his importance with a key stretch of successive possessions starting around the 5:00 mark of the 4th:

2) Next possession (4:55): Villanueva drives baseline, Tiago slides across the lane to take the charge, Villanueva done with 5 fouls.

4) Next possession (4:22): Tiago jumps out on the perimeter to make a great steal, keeps the ball in bounds, hit-ahead pass leads directly to a Garcia transition lay-in, Brazil 72-66.

6) Next possession (3:30): Tiago posts on the left side, surveys, finds Varejao cutting on the baseline for a reverse lay-in, Brazil 74-66. Game Over.

Ahh. He had me salivating for a few seconds there. 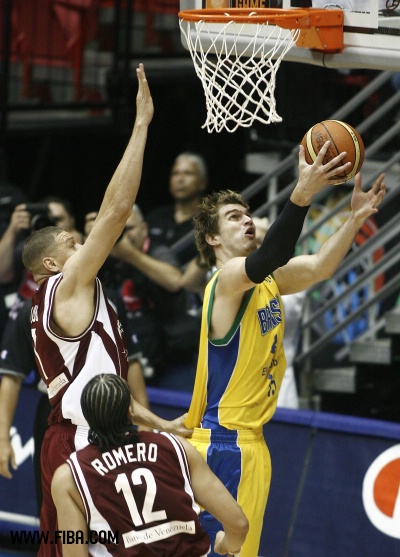 Watch and learn, kiddos. Pulling someone's jersey gets you additional leverage to block a shot.

Brasil runs off with this one. Splitter has another solid but not really spectacular outing with 11 points and 8 boards, 3 coming from the offensive glass. As the game recap mentioned, most of Brazil’s points were scored from the inside, and a lot of those came courtesy of putbacks from Andy and Tiago, and relentless drives to the basket from the Brazilian Blur. For the second straight game, Splitter also tallied 4 fouls and 3 turnovers so yep, he’s a typical big man. But I guess what I really like about him, and I’m only saying this based on the highlights below, is that he really likes to bang inside. That should bode well for the Spurs. At least for next season. Tiago not cometh. Boo-hoo. 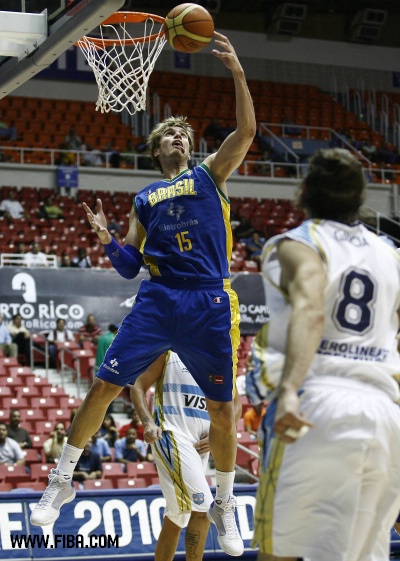 Now this was a really interesting matchup, not because it’s difficult to tell who’s Brazilian and who’s Argentine, but because Brazil’s win put Argentina in quite a quandary there with 2 straight losses. Brazil’s coach really took this game seriously as his five starters all logged 30 minutes and up, with Splitter playing for 36 minutes. Looking at the boxscore, Tiago didn’t seem to do well offensively as he only tallied 7 points. He also took only 5 shots. and made 2 of them. He did have three assists so maybe he was looking to create more for his teammates. His rebound total was at 8 but this time, he was zero on the offensive glass. Barbosa again carried the offensive load in this game, and Varejao scored a pretty decent 19 points too. Shocking indeed.

On the other end, Scola was his usual reliable self. And just like that, I drive another stake to the hearts of Spurs fans.

Here are your Game 3 highlights: Tiago shows off a sweet turnaround jumper in one play, and also flushes it down. Admit it Pop, the no-dunk zone will soon be history, if not this season then the next. There’s also a funny sequence here with time running out, where Tiago goes up to shoot a three and then experiences a "what the fuck?" moment and while in mid-air, decides to pass to Varejao, who believes so much in his offensive repertoire that he nonchalantly shoots the rock. Boom, at the buzzer. Seriously, WTF?

It’s hard to rate Splitter’s defense from the highlights, but if you have some observations feel free to share them. Brazil has a bye for Saturday (April 29) and goes up against Panama on Sunday (April 30). I have no feeds yet for that one, but if you want to watch the games live and have some money to throw around, you can watch it for a fee over at FIBA TV. Oh, and you can use this post as a game thread. The economic crisis has taught us to be efficient around these parts. Or maybe I'm just feeling like a hack to make one.