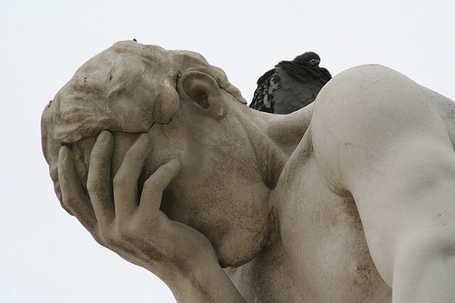 I'm a big believer in the powers of what we call "cábalas", little rituals that we maintain through a winning streak to keep them going. Silly superstitions, I know, but if anything they're great for calming stressed sports fans. I wish I had something like that going on with the Stars right now, to maybe start bonding with this odd Spurs spin-off I'm trying to love, but it's not possible with our gals wading through a rough stretch of their schedule and having lost 4 in a row.

As of this moment, after Minnesota's timely win against the disastrous Monarchs, the Silver Stars are out of the playoffs. Both teams will meet next week, so we will have a chance to catch up, but right now we are simply being outplayed by our opponents. Today we play once more against the Detroit Shock, and despite the outcome of our last game against them, it's a winnable match.

It's now or never, people. Join me after the jump for more lamentations and platitudes. 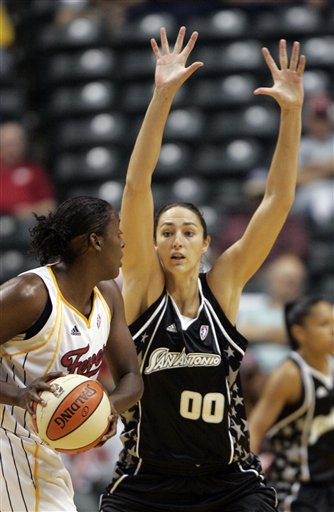 A lousy photo for a lousy game 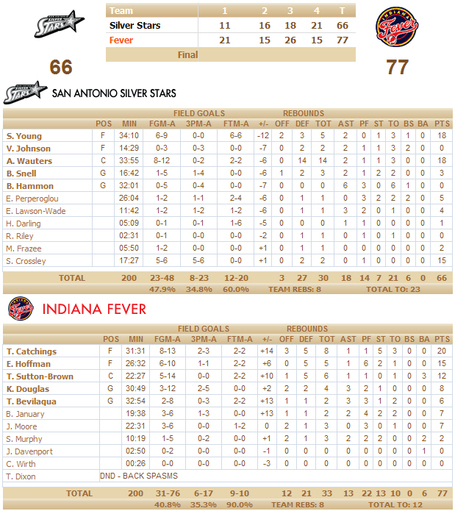 Before I forget, I just want to say that I love the Fever's pregame ritual. Don't ask me to describe it, but there was a lot of rhythm involved, and I was all pumped up to blog like a BEAST! "LEMME GET SUMMA THAT, SISTAH!"

The Fever's previous game had been the one game in a zillion that Catchings hadn't scored. It would be Becky's turn that night. For those of you who don't know, don't remember or simply can't believe it after watching this game, Becky Hammon is the second scorer in this league, with a 19.7 points per game average. If I were the kind of fan to assign blame after a bad loss, I would point out that our veteran leader going scoreless in 32 minutes of lacktion should be falling on her sword right now.

But of course, the loss wasn't solely Becky's fault. The team still suffered from the usual problems:

Those were the usual suspects, but that night we had two more issues: turnovers and 3-point shooting. 23 turnovers (vs. 10 for the Fever) are way too many, even in my local club's pickup league. Also, prior to this game the Stars had shot 28 percent or worse from downtown in their previous three. Against the Fever they improved to 34,8% (8-23), but that was mostly thanks to Crossley's hot hand (5-6 from deep).

I'm going to stop complaining now. For everything I said, we were close through the entire first half and most of the 3rd quarter, despite starting Becky's lame evil twin. We need to work on getting more out of our 5th and 6th women, though, if we want to get somewhere this season. It's not too late.

3rd - Shanna Crossley: The truth is, there's no third star, because Crossley isn't one. On Thursday, though, she was something even better and exactly what we need: a good role player that can knock down open shots. If Crossley can repeat her performance, the Stars might be making waves.

2nd - Sophia Young: Nothing spectacular, just another solid day at the office for young Sophia. It's been four games and I'm already taking her for granted.

1st - Ann Wauters: Wauters was doubled in just about every possession, and she still managed to get her points efficiently and without fanfare. She's been the best Silver Star since I started watching the team, and it's a pity that her teammates don't capitalize her crisp inside-out passes more often.

Bonus - Tamika Catchings: Amid all the bad losses and subpar performances, the last four games have allowed to see some great players in action. Catching is one of them. For those of you who haven't seen her play, she's a slasher, one of those special players that seem to weave through defenses effortlessly. We weren't able to slow her down during the game at all, and she made us pay for it. Outstanding performance.

In short: ewwww. Moving on.

For our previous game against the Shock last week, the Spurs had a section in their YouTube channel where assistant coach Sandy Brondello shared with the viewers her three keys about the Stars' next opponent. I doubt things have changed so much in the last 7 days, so here we go:

Unfortunately this is not one of those games. Your local ESPN channel might broadcast it, though, so check your TV. The game starts 2 PM, Spurs time. As in, minutes before this preview was posted. I did tell you I was a hack. 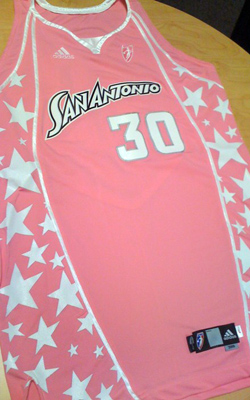 Do you have it in pinker?

I've shown it in the last preview, but in case you missed it, that's the jersey the Stars will be wearing today in honor of CHRISTUS Santa Rosa. Nice, innit?

Okay, that's it. I've done my part. Now how about a victory, girls?